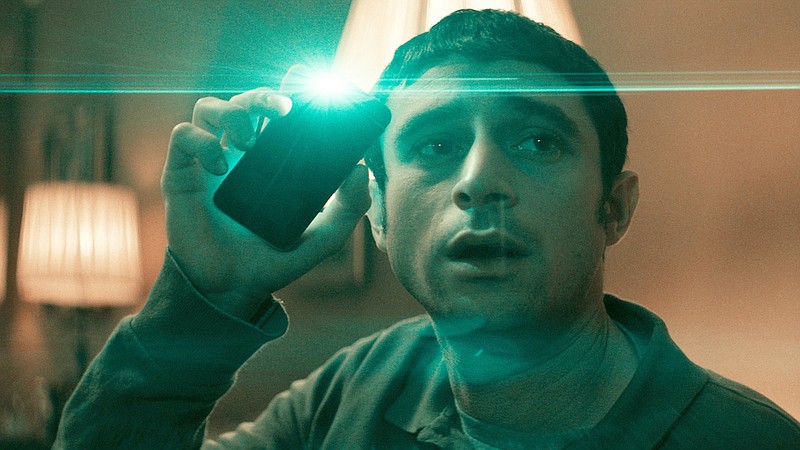 Yakov (Dave Davis) is a young Brooklyn man trying to establish himself in secular society after breaking from the Orthodox Jewish community in the supernatural horror film “The Vigil.”

I thought we were out of danger Monday morning.

The 18 inches of snow we had in the past week had melted considerably overnight, and while we were still around 30 degrees at 7 a.m., it was going up into the 60s later that day. All I had to do was get to my car, go to my dental appointment, and get back home. I could expect a fairly routine week.

For the first time in days I was wearing something other than boots. I was wearing a shirt with buttons. I went out through the garage, toward my car parked on the street. I decided to sidestep some of the residual snow, so I stepped on a dry spot in the street.

It wasn't dry. My feet swept up in slow motion. I had plenty of time to think about how stupid I'd been. Blam.

I landed on my right arm. The upper part of it. I laid there on the ice a minute, let a wave of nausea pass. My arm was useless, pinned to my side, but I knew it would pass. I could move it as much as I could bear the pain. Nothing broken. I'd taken elbows in basketball games in roughly the same spot, it would hurt for awhile but I'd get over it.

Well, I thought I'd get over it.

For once I was glad I'd given up and gotten an automatic transmission in my car. No way I could have worked a stick shift. I got my errands done and came home, and found I couldn't type. Or rather I couldn't without bringing the keyboard to my chest and T-Rex short-arming the keyboard. And even that hurt. A lot.

I tried using one of those dictation apps. I can't write that way. So I'm punching this column out left-handed, laying on the floor with the laptop on my chest. But there are a lot of other things I'm not doing this week.

There are two films opening theatrically this week, Warner Bros. "Tom and Jerry" and "The Vigil' from IFC. Unfortunately we don't have reviews of either one -- "Tom and Jerry" apparently wasn't screened for critics, and though I handed off the review of "The Vigil" -- a supernatural horror film set in an Hasidic community -- to another critic when it became apparent I was in no shape to type a review, but he couldn't get the link to work.

I'm also not writing a review of "Crisis," the over-plotted, creaky opioid thriller by Nicholas Jarecki ("Arbitrage") that is nearly redeemed by a naturalistic performance by Gary Oldman as a whistle-blowing college professor.

Which is just fine, I guess, because "Crisis" is destined to be one of those films that's more interesting to think about than to actually watch. It's got a cast full of interesting names -- Armie Hammer, Evangeline Lilly, Lily Rose-Depp (unmistakably Johnny's daughter), Michelle Rodriguez, Martin Donovan, Greg Kinnear and rapper Kid Cudi (cast against type as a corporate suit).

And Jarecki -- the half-brother of acclaimed documentarians Andrew Jarecki ("Capturing the Friedmans," "The Jinx") and Eugene Jarecki ("Why We Fight") -- shows up as an ill-fated DEA agent. Set in Montreal and Detroit, it's shot mostly in Montreal, an interesting city to look at, especially if you're undergoing pandemic travel deprivation.

(Montreal is also the setting for "19-2," a Canadian police procedural crime drama that ran on Bravo in Canada from 2014 to 2017 and is currently streaming on Acorn TV. It's a Canadian analog to the old "Adam 12" series and was preceded by a French-language version with the same name and concept, also set in Montreal.)

While I'm sure a lot of the details and scenarios in "Crisis" were drawn from life, the film feels flat and declamatory, ethically driven storytelling that appeals more to one's sense of civic responsibility than to the heart. In that sense, it feels a lot like Jarecki's 2012 movie "Arbitrage."

Nor will I be tackling Lee Daniels' drama "The United States vs. Billie Holiday," which debuts on Hulu today and explores how the U.S. government went after the singer in a manner not too different from the ways they went after Martin Luther King Jr. (see Sam Pollard's recent documentary "MLK/FBI") and Black Panther leader Fred Hampton (see "Judas and the Black Panther").

In this instance, it's Harry J. Anslinger, the racist head of the Federal Bureau of Narcotics (the forerunner of the DEA) who waged a vendetta against Holiday not because she was a high-profile junkie (though she arguably was) but because she insisted on performing "Strange Fruit," the anti-lynching song by Abel Meeropol that she first recorded in 1939. (See Joel Katz' 2002 documentary "Strange Fruit: The Biography of a Song," which aired first on PBS and is now available for streaming on kanopy.com for library patrons and college students.)

Pulitzer Prize-winning playwright Suzan-Lori Parks (2002's "Topdog/Underdog") wrote the screenplay for "The United States vs. Billie Holiday," and in the course of her research read several books by Anslinger, who might be the person most responsible for the internecine "War on Drugs" policies pursued by the U.S. government into the 21st century. Anslinger was a racist who conflated drug use, race and music.

"Reefer makes darkies think they're as good as white men," he once said. "There are 100,000 total marijuana smokers in the U.S., and most are Negroes, Hispanics, Filipinos and entertainers. Their Satanic music, jazz and swing result from marijuana use. This marijuana causes white women to seek sexual relations with Negroes, entertainers and any others."

In Brent Jones' faith-based documentary "Bobbi Jo: Under the Influence" Reed recounts how she descended into homelessness and alcoholism -- "to incomprehensible demoralization" -- before getting clean and starting Healing House with a $50,000 inheritance.

"Bobbi Jo: Under the Influence" is available for rental on most streaming platforms, including Apple TV, Google Play, and Amazon Prime.

I'm also waiting for a screener of Julie Delpy's directorial debut "My Zoe" which she wrote and stars in. Early reviews are middling. In The Washington Post, Michael O'Sullivan writes:

"[S]et in a near future in which the possibility of human cloning is more than theoretical ... the sci-fi-lite setting is suggested, almost so subtly that you might miss it, by flexible cellphones that wrap around your wrist and cars that hum instead of rumble.

"It's the future, but one that's almost visible, if you squint, from where we are right now.

"But for a disconcertingly large chunk of the story, 'My Zoe' is a run-of-the mill domestic drama about a married couple undergoing an ugly separation."

Delpy is consistently interesting as an actor and the premise is intriguing enough. And maybe, when my arm feels better, I'll get around to writing about it.