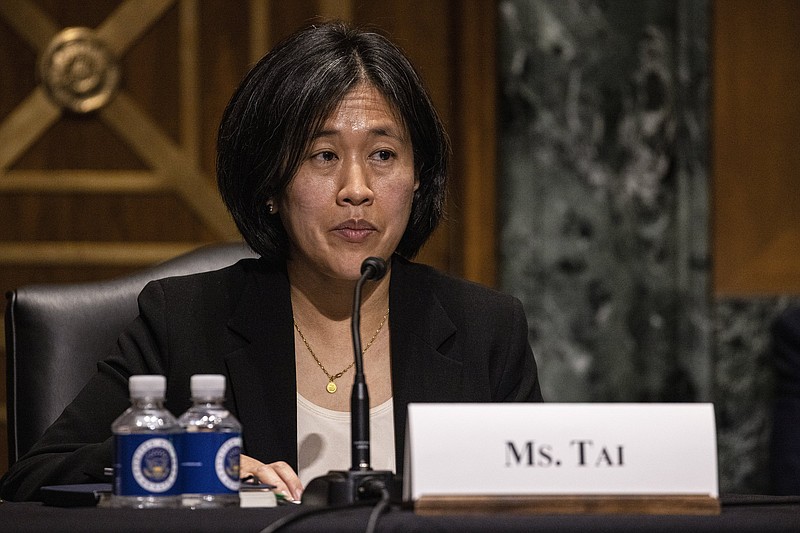 WASHINGTON -- Katherine Tai, President Joe Biden's nominee to become the chief U.S. trade negotiator, said Thursday that U.S. policies must be rethought to safeguard the critical supply lines that feed American factories and to regain the support of "regular people" who have felt victimized by previous commercial deals.

Speaking at her Senate confirmation hearing, Tai promised a "worker-centered" trade policy that would break with both the protectionism of former President Donald Trump's administration and the reflexive pro-trade stance of earlier Democratic presidents.

Many Americans "for a very long time felt disconnected from our trade policies," Tai said, adding that voters saw trade deals as "concocted by people in places like Washington, Brussels and Geneva" in ways that were either irrelevant or damaging to their interests.

Tai cited novel labor and environmental provisions in the U.S.-Mexico-Canada Agreement as an example of her approach. The accord was negotiated during the Trump administration. But as chief trade counsel on the House Ways and Means Committee, Tai played a key role in rewriting the pact's fine print to win additional Democratic support.

Under pressure from congressional Democrats, Trump's trade team agreed to strengthen the pact to make it easier for Mexican workers to form independent unions and demand better pay and benefits -- decreasing the incentives for U.S. firms to move south of the border to take advantage of cheap and compliant labor.

Reps. Richard Neal, D-Mass., and Kevin Brady, R-Texas, the chairman and senior minority member of the House Ways and Means Committee, introduced Tai to members of the Senate Finance Committee, a sign of the bipartisan support that appears likely to cement her confirmation.

Tai's testimony took place as the nation's automakers are struggling during a paralyzing shortage of semiconductors, which has idled assembly lines. At the White House on Wednesday, the president said he had directed top aides to meet with industry representatives and U.S. allies in search of a short-term fix.

"A lot of the assumptions we built our trade policy on maximized efficiency without regard to the requirement for resilience," she said. "Trade policy needs to be rethought and reformed with resilience in mind."

If confirmed as U.S. trade representative, Tai would face early questions over Mexican and Canadian compliance with the new North American deal; U.S. prospects for rejoining an 11-nation Pacific agreement that Trump quit; and making trade policies serve other Biden priorities such as climate change.

During her more than three-hour appearance, Tai deflected Republican concerns that the administration would be slow to sign new trade deals, saying she "did not plan to be put on the back burner at all."

She vowed to implement Trump's signature trade deal with China and she acknowledged ongoing concerns about Beijing's trade practices and its hopes of ousting the U.S. as the world's technological leader.

"I know firsthand how critically important it is that we have a strategic and coherent plan for holding China accountable to its promises and effectively competing with its model of state-directed economics,″ Tai said.

"The Chinese are not shy about articulating their ambitions," said Tai . "We can't compete by doing the things China does."

She made few specific commitments other than vowing to consult with lawmakers. She promised to make the process for companies to secure exemptions from U.S. tariffs on Chinese goods more transparent.

Tai acknowledged sharing with her predecessor, Robert Lighthizer, the goal of reshoring some lost factory jobs. But she took a subtle shot at the chronic chaos of the Trump years, saying she hoped to "accomplish similar goals in a more effective, process-driven manner."

Information for this article was contributed by David. J. Lynch of The Washington Post and by Paul Wiseman of The Associated Press.