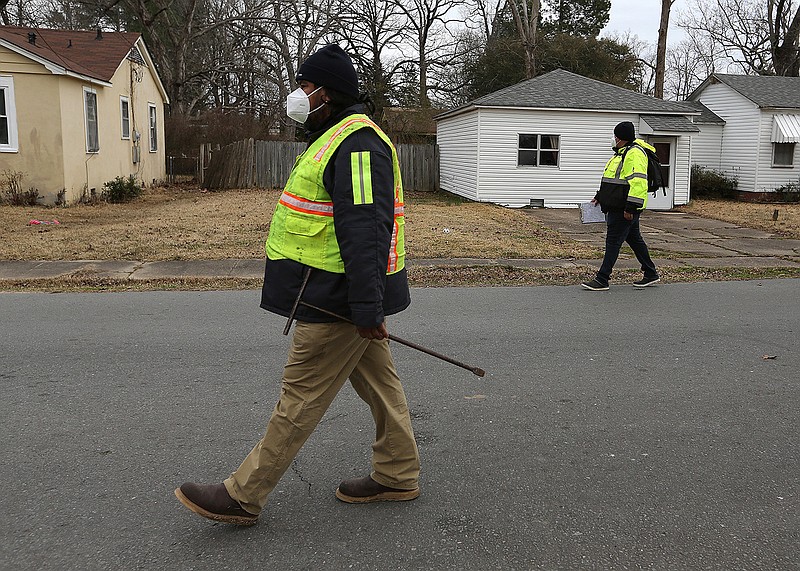 A pair of workers from Liberty Utilities walk through a neighborhood on Thursday, Feb. 25, 2021, in Pine Bluff. The workers, who didn't wish to be identified, said they were going street to street looking for leaks in residential areas. .(Arkansas Democrat-Gazette/Thomas Metthe)

While improving rapidly, water systems' low pressure and boil orders continue to hinder service in some parts of Arkansas about a week after a winter storm rolled out of the state.

In the past week, water problems stirred responses from local officials, Gov. Asa Hutchinson and the Army National Guard, and triggered an investigation into one utility by the Arkansas Public Service Commission and the attorney general's office.

Liberty Utilities filed a show-cause order with the commission Thursday afternoon outlining its preparedness and response to the winter storm that dropped temperatures into the single digits and dumped 15 inches of snow on Jefferson County, leaving Jefferson Regional Medical Center and the University of Arkansas at Pine Bluff with insufficient water pressure.

The utility began seeing an increase in demand on the system on the afternoon of Feb. 18 after back-to back snowstorms, the order says. That was two days after medical center officials first noticed pressure drops, hospital spokeswoman Jamie McCombs said Thursday.

Brian Thomas, president and CEO of the hospital, told Hutchinson during a meeting Tuesday that the hospital diverted patients to other hospitals because of the insufficient water pressure. He said upstairs floors were unable to properly flush toilets or run water, but some parts of the hospital, such as the emergency room, continued operating.

The hospital's inability to fully function caused a financial drain on the facility, he said. McCombs was unable to provide estimates about the financial burden when asked Thursday by the Democrat-Gazette.

Heavy snowfall delayed some response early in the repair process, the order says.

The order does not provide an exact reason for the low pressure at the hospital.

It was previously reported by UAPB that the problem was because of a main break in the utility's system, but Liberty Utility says a company investigation found that the low pressure was because of freezing pipes maintained by the university.

Pine Bluff Mayor Shirley Washington had been critical of the water utility but said Thursday that communication has increased between her office and the company.

"They could have let us know what was going on a bit earlier, because we found out about it at the same time as the general public," Washington said. "I feel like they are trying to come on board and correct some of what they failed to do upfront."

That includes a significant increase in employees working to find additional leaks and breaks in the system, Washington said.

"I think we are beginning to see the light at the end of tunnel," she said. "We will make it through this."

Water pressure at the three water plants in Pine Bluff ranged from 45 to 73.1 pounds per square inch, an email states. Typical operating pressure is between 50 and 60 psi.

Other water systems across the state also were seeing service improvements, officials said.

The system saw significant outages over the past week as it worked to repair multiple main breaks and vehicle-crash damage to fire hydrants. Vondran said Thursday that only isolated leaks remained, causing water concerns for only some customers.

The utility lifted water conservation efforts Thursday morning, Vondran said. He said the system remained under a boil order while the utility awaited results of tests sent to the Arkansas Department of Health. Results were expected late Thursday or sometime today, he said.

Darren Edwards, water superintendent for the Sebastian County town of Hackett, said that city's water system was again operating at 100% Thursday. Customers remained under a boil order while awaiting test results, he said.

Bill Burrough, Hot Springs' city manager, said his city's system was running at 90% capacity Thursday. He said under 1% of the water utility's customers lost service because of last week's weather.

About 92 utility employees, with assistance from the Fire Department, worked to find leaks in the system that serves about 36,000 residential customers, he said. Leaks ranged from 50 gallons an hour to 5,500, he said.

No boil order was in place for Hot Springs.