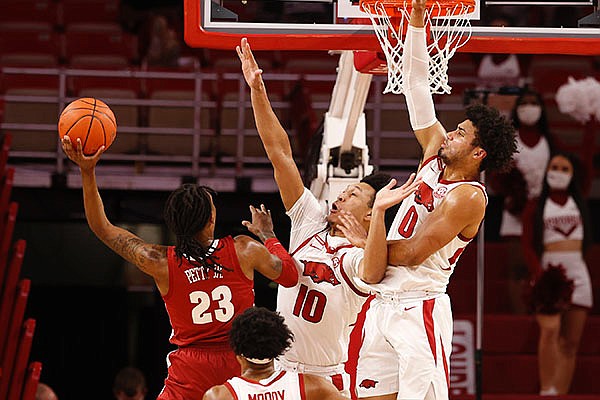 Arkansas forwards Jaylin Williams (10) and Justin Smith (0) attempt to block a shot from Alabama’s John Petty during a game Wednesday, Feb. 24, 2021, in Fayetteville. (Photo by Kent Gidley via SEC Pool)

FAYETTEVILLE -- Isaiah Joe has moved on from the University of Arkansas to the NBA as a rookie with the Philadelphia 76ers, but Fort Smith Northside High School is still well represented with the Razorbacks when it comes to taking charges.

Jaylin Williams, a 6-10 freshman from Northside, is on pace to lead Arkansas in charges taken after Joe -- a 6-5 guard who also starred for the Grizzlies -- led the Razorbacks in that category the previous two seasons.

Williams increased his team-high charges taken to 13 on Wednesday night when No. 20 Arkansas beat No. 6 Alabama 81-66 in Walton Arena.

Herbert Jones, the Crimson Tide's 6-8 senior getting some attention for SEC player of the year consideration, picked up his first foul at the 16:43 mark of the first half when Williams drew a charge.

The play set the tone for a tough night for Jones, who fouled out with 4 points and 5 turnovers in 24 minutes.

Joe led the Razorbacks with 27 charges taken in 34 games as a freshman and with 18 in 26 games as a sophomore, when he missed six games because of a knee injury.

"I'm going to be real honest with you, you're talking about two guys in Isaiah and Jaylin that have a high IQ for the game of basketball," Burnett said. "They understand the game, and you can tell both of them have studied the game really well.

"They know if a guy's out of control coming to the hole, 'I'm going to just slide over there and take this charge.'

"To me, that's just being in the right place at the right time and knowing how you can make an impact on the game."

Williams scored 21 points when Northside beat No. 1 North Little Rock 45-42 last season in Kaundart-Grizzly Fieldhouse, but what Burnett remembers most is his big man taking a charge from Spencer Simes with 1.6 seconds left and the Grizzlies leading 43-42.

"Most big guys want to do what when somebody goes to the hole?" Burnett said. "They want to jump up there and block everything, and sometimes Jaylin will rotate over to get a block.

"But a lot of times he fakes guys out and out-smarts them and says, 'OK, c'mon, I'm just going to take a charge.' Just like Isaiah, Jaylin is willing to sacrifice his body to help his team win."

Williams has taken two charges in games against Texas-Arlington, Georgia, LSU and Auburn.

"In the summertime, we played against each other a lot, so that was me on the other end of all those charges," said freshman guard Moses Moody, who led the Razorbacks with 24 points against Alabama. "I hated that dude right then, but now I love him. I love playing with him."

Moody said Williams does "all the little things" to help the Razorbacks.

"He's going to take the charges," Moody said. "Y'all might not realize it, but when J-Will sets a screen, the guy he's setting it for is going to be open.

"Small stuff like that shows all he does for the team that doesn't show up on the stat sheet."

What showed up in the stat sheet against Alabama was a season-high 13 points and 8 rebounds for Williams in 22 minutes off the bench. He scored 10 points in a 17-2 run in the second half for the Razorbacks that turned a 46-39 deficit into a 54-47 lead they expanded on to put away the Tide.

"It probably is unheard of in 22 minutes," Razorbacks Coach Eric Musselman said of Williams helping Arkansas outscore Alabama by 30 points when he was in the game. "He's a great player. He keeps getting better."

Williams didn't play in two of the Razorbacks' first nine games and got in for four or fewer minutes in three others. In 10 of the last 14 games, he's played between 14 and 29 minutes.

"Early in the year he was patient," Musselman said. 'I'm sure internally he was getting anxious to play more, but he kept working on his game."

Williams is averaging 3.7 points, 4.5 rebounds and 14.9 minutes, including 4.3, 4.7 and 16.9 in SEC games. He's had 10 rebounds in three games, but Wednesday was arguably Williams' best all-around game considering Alabama's national ranking and the plays he made in the second half to help beat the Tide.

"I want to be a guy that comes in and can change the game if we need it," Williams said. "That's a great feeling."

Williams will have a chance to add to his charges taken total when Arkansas plays LSU on Saturday in Walton Arena.

"If it took 10 charges to win, Jaylin would do that," Burnett said. "He'll do whatever it takes."