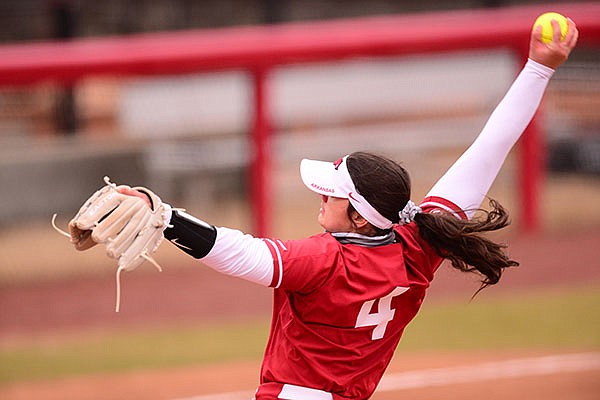 Arkansas' Mary Haff throws a pitch during a game against Texas Tech on Friday, Feb. 26, 2021, in Fayetteville.

FAYETTEVILLE -- Mary Haff didn't need to be, but she was almost perfect in the circle Friday afternoon.

The redshirt junior tossed a no-hitter and No. 24 University of Arkansas tied a program record with five home runs in a 9-0 victory over Texas Tech in the Razorback Invitational at Bogle Park.

Haff (4-1) struck out six, didn't walk a batter and was in control over five innings. Texas Tech (4-3) hit only one ball out of the infield and had just one batter reach base courtesy of an Arkansas fielding error.

"We wanted to work on just mixing her pitches a little bit more to keep the hitters off-balance," Deifel said. "But to be completely honest, her rise was so good today we still rode that. She did a really good job of spinning it and spotting it and just attacking the hitters.

"She's been pitching so well all year. It's just nice for her to have a game like today. To get that no-hitter in the books is pretty special."

Leadoff hitter Hannah McEwen gave Haff all the offense she needed when she lined a pitch over the right-center field fence in the bottom of the first inning. The Razorbacks (9-2) were far from done.

Freshman Hannah Gammill crushed her fifth of the season, another two-run home run, with two outs in the second inning for a 9-0 Arkansas lead. Ally Manzo's one-out double just inside the first-base bag was the only Arkansas hit that stayed in the park.

Southeast Missouri State (1-6) pulled within 5-2 in the top of the fourth inning thanks to three consecutive hits off Arkansas starter Jenna Bloom, but she got the next three batters out to escape further damage.

After Arkansas loaded the bases on a walk, an error and a hit batsman, Burnside crushed a 1-2 pitch far over the left-field fence, her fifth home run of the season, for a 9-2 Razorbacks lead.

Arkansas is scheduled to face SEMO again today at 3 p.m. and finish the weekend against Texas Tech on Sunday at 12:30 p.m.