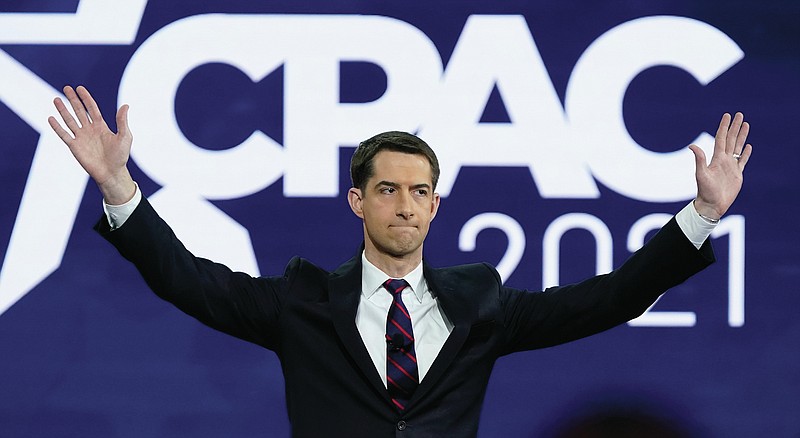 Three years ahead of the 2024 presidential primaries, potential Republican candidates are lining up to address the Conservative Political Action Conference in Orlando, Fla.

In a 15-minute address, Cotton portrayed leftists as dangerous enemies.

"We face many threats in this country, whether from China or Iran or Islamic terrorism, but there is no more pernicious threat to America than the rejection of our founding principles and our heritage and our tradition," he said.

"Many on the left have concluded that America is a fundamentally flawed, irredeemable, wicked place," the lawmaker from Little Rock said.

[Video not showing up above? Click here to watch » https://www.youtube.com/watch?v=r3bFlr-H5ac]

"These radical liberals, they want to erase our history. They want to replace it with their crazy Marxist theories," Cotton said. "They may say that it's about the Civil War or racism. Don't believe them."

The sometimes-violent unrest that followed the death of George Floyd in Minneapolis was a focus of Cotton's comments.

"Last summer, as those mobs rampaged in the streets, they tore down statues of [former Presidents] Abraham Lincoln and U.S. Grant. When they're tearing down statues of Lincoln and Grant, it's not about the Civil War or racism. It's because they hate America," Cotton said, drawing applause.

Defending comments he made in June, Cotton said, "If the police cannot, or especially if they are not allowed to, restore order, then it is time to send in the troops."

During the wave of violence, Cotton said, "Police stations were firebombed, buildings and businesses were looted. Courthouses were attacked. Statues to our heroes were toppled."

While lamenting attacks on courthouses, Cotton made no mention Friday of the Jan. 6 assault on the U.S. Capitol by supporters of President Donald Trump that left five people dead and dozens of law enforcement officials injured.

"We're not an irredeemably flawed place that needs to be burned to the ground. Nobody on the left thinks that," Gray said. "But the notions of the Confederacy and the notions of the divisions of racism and hate that divide us do have to be tackled and addressed and corrected and moved forward."

Loathing of the left was a common theme during Friday's speeches.

U.S. Rep. Madison Cawthorn, R-N.C., denounced "these globalists who want to indoctrinate our children ... [and] remove our moral foundation."

"Brutal and vicious" Democrats, he said, "are trying to turn this country into a Communist ash heap."

The conference continues today with a full day of panels and speeches. Usually held near Washington, it was moved to Orlando because covid-19 restrictions are less severe, organizers said.

On Sunday, the conference will announce the results of its presidential straw poll. Afterward, the crowd will be addressed by former President Donald Trump.