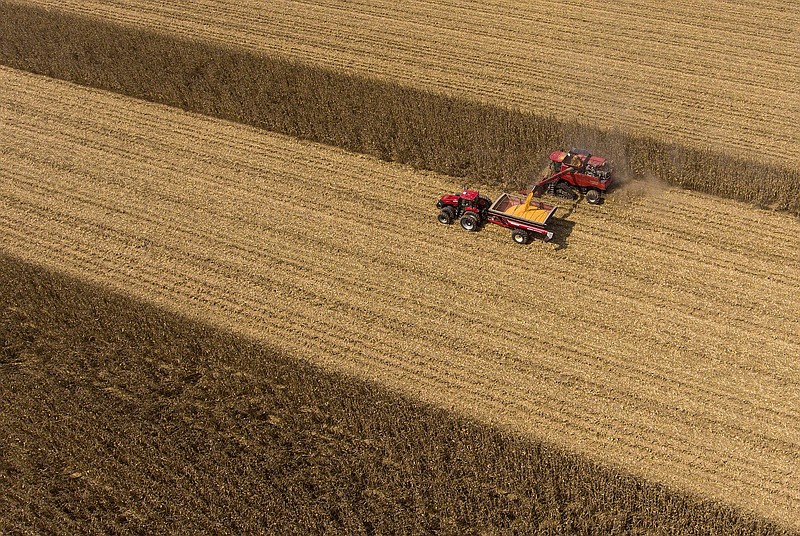 Federal subsidies to Arkansas farmers from 2014 through 2020 topped $3.1 billion, ninth-most in the nation, according to an organization that tracks such payments nationally.

Buoyed by programs established by the Trump administration to deal with trade wars and the coronavirus pandemic, net farm income in Arkansas and across the nation in 2020 hit their highest levels since 2013 after years of declining crop prices.

Tariff-relief aid, in late 2018 and all of 2019, amounted to $730 million in Arkansas, according to the Environmental Working Group, a nonprofit in Washington, D.C., that conducts periodic evaluations of farm subsidies, other government spending and policies affecting health care, the environment, energy and other issues. The Trump administration established the tariff relief in response to trade wars, especially with China.

The Environmental Working Group supplied Arkansas-specific numbers to the Democrat-Gazette from its national examination of farm subsidies. The group obtained the data from the U.S. Department of Agriculture under the Freedom of Information Act.

In addition to the $730 million in tariff relief, Arkansas farmers received:

• $124.5 million for the same years for losses from natural disasters.

• $292 million last year as part of a Trump administration program for losses sustained during the coronavirus pandemic. Food banks, schools and other nonprofits received a small portion of that money.

Nationally, those subsidies total more than $81 billion since 2014, not including smaller subsidy programs in conservation and crop insurance, the Environmental Working Group said.

Federal aid accounted for 38% of farmers' net income of $121 billion in 2020, according to the USDA. Higher crop prices and an increase in sales to China, particularly of soybeans, have boosted farm income this year.

The USDA said in mid-February that it will be at least a decade before farmers see another year as profitable as 2020. The USDA projected a continuous rise in sales through 2030 for farmers but lower profits.

The Environmental Working Group is a critic of how the programs are implemented, saying most of the money goes to large farms.

"The staggering amount of taxpayer dollars flowing to farmers last year did nothing for small farmers, who don't have much of a safety net," said Anne Schechinger, senior economic analyst for the Environmental Working Group. "Over time, federal agricultural subsidies have been a major contributor to the concentration of wealth in the hands of a few in rural America. President [Donald] Trump doubled down on these policies, somehow finding more money to throw at wealthy farmers and landowners."

The General Accountability Office, an independent, nonpartisan branch of Congress, said in September that the top 25 recipients of trade aid in 2019 received an average of $1.5 million per farm.

The Environmental Working Group recommended such reforms as stricter payment and income limits, as a way to help smaller farms, especially those owned by members of minority groups. It also called for an end to the tariff-relief and pandemic-aid programs, both of which have been put on hold by President Joe Biden's administration.

Excluding Texas, Arkansas is the only Southern state among the top 10 subsidy recipients, as compiled by the Environmental Working Group. Iowa received the most, at $6.7 billion, followed by Texas' $6 billion. At No.9, Arkansas was ahead of Indiana by about $6 million. 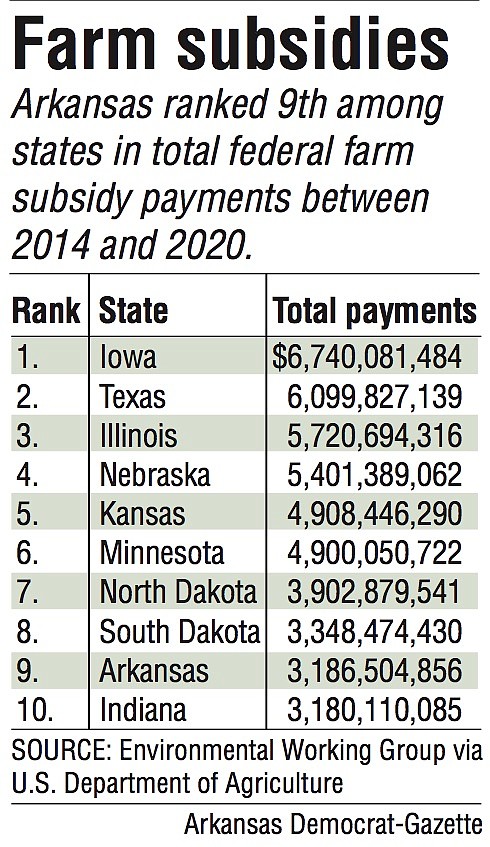