Prehistoric perennials — Humans have done their best to destroy roses 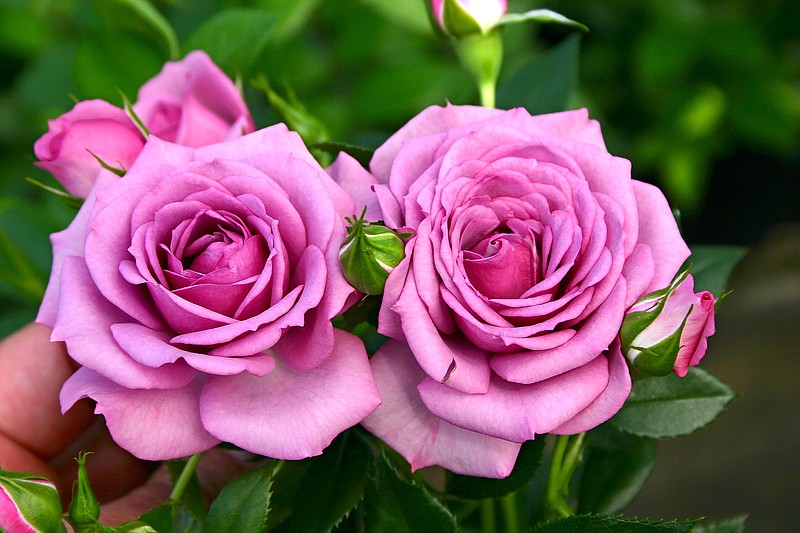 Plum Perfect roses, which are included in the Sunbelt collection from Kordes Roses, selected for strong performance in warmer zones. (Peter E. Kukielski via The New York Times)

Roses have a reputation for being difficult to grow and disease-prone. But who's really to blame?

We are, said Peter E. Kukielski, a rosarian and the author of "Rosa: The Story of the Rose," a new book about the flower's place in human cultural history. After the genus Rosa had survived some 35 million years on the planet, it took us less than a century to render it less resilient than it had to have been to stick around that long.

"It has to be one tough plant to go through all the climate changes and everything else it's gone through before we started hybridizing roses," Kukielski said, referring to the human interventions to change the flower's shape into what became the hybrid tea, achieved at the expense of disease resistance.

So "give them some credit," he said. And give them some proper companions, too: flowering perennials, annuals and bulbs that foster a healthier rose garden, without chemical intervention. Like the one he designed three years ago for the Royal Botanical Gardens in Ontario — a chemical-free province — that he proudly describes as "3,000 roses and 18,000 perennials chosen as insect-attracting companions."

'WE WILL HAVE BALANCE'

He added: "I don't mind bad insects. As long as we have the good insects, we will have balance."

It's no surprise that Kukielski doesn't recommend a diet of synthetic fertilizer, or propping roses up with pesticides and fungicides if spider mites or black spot threaten. As a curator at the New York Botanical Garden, he won attention for his work from 2008 to 2014 on the Peggy Rockefeller Rose Garden — an approach that involved planting and trialing roses for disease resistance, using fewer chemicals. That served as research for his first book, "Roses Without Chemicals: 150 Disease-Free Varieties That Will Change the Way You Grow Roses."

"When I first did the garden revamp," he said, "choices of disease-resistant roses were kind of limited."

But now there are many more roses bred with that intent, he said: "The rose world woke up to the idea that gardeners don't want to rely on chemicals to grow their favorite flowers."

That pink rose on the latest catalog cover looks delicious, but wait: How would it fare where you garden, compared to similar-looking varieties?

"A rose is a rose is a rose ... not," Kukielski said. "Choosing the right one for your climate region can make for instant success. But the wrong rose will constantly be diminished, and the home gardener may give up."

Fortunately, he said, more companies are now educating customers about which regions a variety is best suited to: "It's certainly an advance from where we were even five years ago."

Breeders (on their wholesale websites) and retailers (on their consumer-focused ones) often make it possible to filter varieties by regional adaptability and disease resistance. So rose-shopping gardeners take note — and do your homework.

Some breeding has focused on cold-hardiness, producing varieties like the Buck roses from Griffith J. Buck of Iowa State University or the Easy Elegance roses bred by Ping Lim. Other varieties meet the opposite challenge: The Sunbelt collection from Kordes Roses is selected for strong performance in warmer zones.

Certain trademarked series are marketed for toughness, including Carefree, Knock Out, Drift and Oso Easy, although there could be genetic trade-offs. As Kukielski pointed out, "When a series has been pushed to fill out an entire color wheel of varieties, some colors — especially yellow — may be less resilient."

Fragrance can also be diminished.

"If you want a fragrant garden, depending on where you live there may be some disease issues," Kukielski said. "Breeding efforts focused on fragrance may not have the resistance, especially in hot, humid climates, against fungal diseases."

But putting scent back in is on some breeders' to-do lists, he said. One example is the Parfuma collection from Kordes, a company long focused on disease resistance.

There is no better proof of a plant's durability than having data on what happens when it's put to the test of multiyear garden trials in diverse regions. One program underway is the American Rose Trials for Sustainability, which Kukielski co-founded, taking place at Longwood Gardens, the Scott Arboretum of Swarthmore College, Tucson Botanicals Gardens and university cooperative extension sites around the country, where roses are subjected to the challenge of no-spray environments and offered no help from pesticides and fungicides.

Another is the American Garden Rose Selections Trials, with testing sites at Queens Botanical Garden, Chicago Botanic Garden and other places in diverse zones.

Both programs publish results and recommended varieties every year.

For local information, try asking at garden centers with landscaping businesses, where employees may be able to recommend varieties that perform well for clients near you.

Or talk to the local rose society, Kukielski suggested, and neighbors who garden: "If the person down the street is growing Queen Elizabeth and it looks great, take that as a cue."

Kukielski's definition of a modern rose garden at any scale: "Not a monoculture, but a mixed border."

Into his rose beds he layers a long season of companion plants, using a heavy hand, with emphasis on flower types preferred by beneficial insects (pollinators, predators and parasites alike). Grouping multiple plants of a single variety makes for a more inviting appearance than scattering one-offs around.

Of course, there are the classic rose companions: the chartreuse froth of lady's mantle (Alchemilla mollis) or catmint (Nepeta), with Clematis scrambling up the shrubs. A range of Allium — from tiny yellow-flowered A. moly to towering purple Globemaster — and, later, self-sowing annual Verbena bonariensis (a butterfly favorite) make big statements.

But Kukielski also likes the umbel-shaped flowers of carrot family members, which are attractive to many beneficial insects — including, he hopes, tachinid flies, particularly one species imported in the 1920s as a biological control from Japan, where it is a natural enemy of the Japanese beetle that is a scourge to roses.

He is also partial to dill's yellow umbels, its ferny texture and its inclination to sow around. And he allows cilantro to flower and self-sow along garden edges.

Beyond dill and cilantro, favorite herb companions include tansy, feverfew, lavender and thyme.

FEED THE SOIL, NOT THE PLANTS

Think healthy soil, not bagged fertilizer, Kukielski advised. "When I stopped feeding my roses and started feeding the soil," he said, "the rose garden became a lot easier."

He was inspired by the Earth-Kind methods promoted by Texas A&M AgriLife Extension. The inspiration for the soil-management practice, as he translates it: "Think forest floor, where nobody fertilizes but leaves fall, that then break down and feed plants."

To mimic that process, he puts down 3 inches of mulch, maybe an inch of which has decomposed into humus by season's end, benefiting soil health and fertility.

"Just top up the mulch again next spring — but don't disturb the soil," he said. "Once we started doing that at [New York Botanical Garden] you could just tell that the plants were happier. There was a big difference by Year 3."

At his home garden in Maine, he also allows fallen tree leaves to remain in place and degrade. He hasn't fertilized in three or four years, he said, beyond an occasional soil drench of dilute fish emulsion.

"When I first started on the Peggy Rockefeller garden, I did get comments on that," he recalled. "'The plants should be 6 feet apart,' people said. But the new hybrids are so resistant, I can put them closer. And as they grow together, the colors really show off — you're painting with the colors."

THE NEXT CHALLENGE: ROSE ROSETTE DISEASE

Today, rose researchers and breeders face a formidable opponent. Rose rosette disease, a naturally occurring virus, is spread by a tiny, windblown mite that has used the invasive multiflora rose as a host to expand into an increasing territory.

Early symptoms of infection include abnormal growth: excessive thorns, red pigmentation and general disfigurement — even what is known as witch's broom, growth that resembles birds' nests.

Industry and university experts have created a website about the disease and ongoing efforts to combat it. But at the moment, only vigilance — including eradicating nearby multiflora roses — and drastic measures are prescribed.

"If the gardener does discover it in the garden, the plant should be removed and destroyed, roots and all," Kukielski said.

But a new rose can be planted right away, as the virus cannot live in the soil. Or you could just let all those companion plants take up the slack.