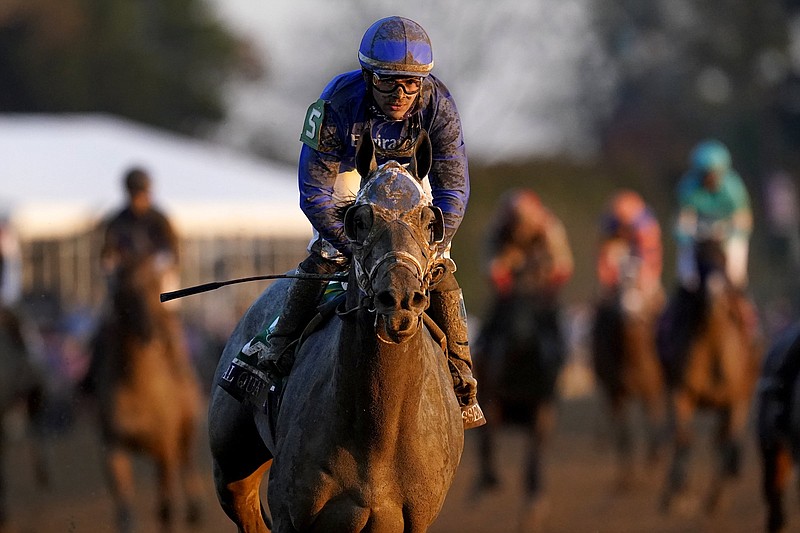 HOT SPRINGS -- The short field for Oaklawn's Grade III, $750,000 Southwest Stakes for 3-year-old horses is long on talent, particularly at the top.

Seven horses are entered in the 1 1/16-mile Southwest, the second of Oaklawn Racing Casino Resort's four Kentucky Derby qualifying races and the 10th of 11 races on today's card. Post time is scheduled for 4:58 p.m.

The Southwest, the final of three stakes set for today, was originally scheduled for Feb. 15, along with the Grade III, $600,000 Razorback Handicap for horses 4 years old and up. Both were twice postponed because of ice and record snowfall. Each joins the $200,000 Spring Fever Stakes for fillies and mares 4 years old and up as today's feature races.

Essential Quality, winner of the Grade I Breeders' Cup Juvenile at Keeneland on Nov. 6, is the Southwest's 3-2 morning-line favorite. A son of Tapit trained by Brad Cox, Essential Quality arrived at Oaklawn from Fair Grounds in New Orleans on Wednesday.

Jockey Luis Saez is listed to ride Essential Quality, which has won all three of his career races.

Cox, winner of the Eclipse Award as 2020 trainer of the year, said he chose the Southwest as Essential Quality's 3-year-old debut over Fair Grounds' Grade II, 1 1/8-mile Risen Star Stakes, run Feb. 13, because of the distance.

"The mile and an eighth, off a layoff, I just didn't think it made the most sense for him," said Cox, who trained this season's Risen Star winner Mandaloun. "We're going to get through the first one before we decide where the second one will be. Off the layoff, the mile and a sixteenth just made more sense than a mile and an eighth."

"Once the Breeders' Cup was over and we let the dust settle, I thought that we would start him back mid-February," Cox said. "It would be nice to get two races in him, and hopefully he shows us enough to march forward to the first Saturday in May."

The Kentucky Derby at Churchill Downs in Louisville, Ky., is scheduled for May 1.

Jackie's Warrior, a son of Maclean's Music from the barn of Steve Asmussen and the 8-5 morning-line second choice, was the 4-5 Juvenile favorite but finished fourth, 3 1/4 lengths behind Essential Quality.

Jackie's Warrior is among three entrants set to make their first 3-year-old starts in the Southwest.

"You've got the 2-year-old champion, and I think we'll have our work cut out for us," Asmussen said on Horse Racing Nation's and Vegas Stats & Information Network's podcast Feb. 19. "I have all the faith in the world in Jackie's Warrior's ability. He's been training impressively as he has his whole life, and we're anxious to get his 3-year-old year started."

Like Essential Quality, Jackie's Warrio has trained exclusively at Fair Grounds as a 3-year-old.

On Feb. 10, Oaklawn's 2020 training champion Robertino Diodoro said he planned to make the Southwest the first start of 2021 for Keepmeinmind, a son of Laoban who finished third in the Juvenile. Unlike Southwest shippers, horses stabled at Oaklawn missed 11 days of training in February because of the snow and ice.

"I thought he'd be OK with his laid-back running style to run this Saturday, but at the same time, I didn't want to go over there just thinking, because if I don't know 100% that the horse is ready, we're not going," Diodoro said.

In his last start, Spielberg, by Union Rags, finished fourth, 11 lengths back in the Grade III Robert B. Lewis Stakes at Santa Anita Park.

"His last race, he just never really got into it," Baffert said. "Struggled all the way around there, but he came back and worked well and so I thought, 'You know what? I know it's going to be a short field, and the races are sort of on top of each other.'

"I thought I would give him another chance. It's an easy ship, so we're just going to send him up there and see if he fits with those."