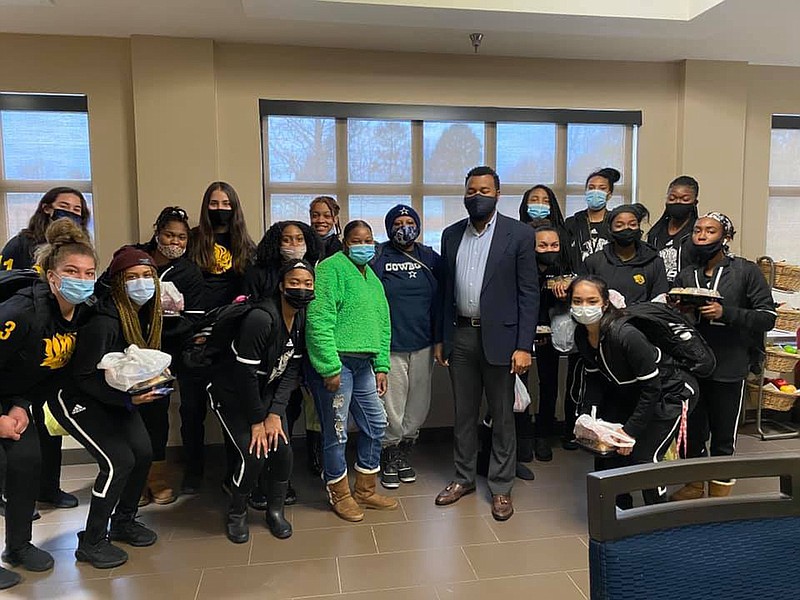 Jamal Gordon (center) poses with the University of Arkansa at Pine Bluff softball team, which was staying at a White Hall hotel, after Gordon finished distributing snacks and toiletry items. (Special to the Commercial)

Editor's note: This is part two of a two-part series.

If all goes well, students could return to their residence halls at the University of Arkansas at Pine Bluff as early as next week now that the water pressure is stabilizing throughout the city of Pine Bluff and on campus.

In a letter to students, faculty, staff and alumni, Chancellor Laurence Alexander said the university was notified Thursday evening that Liberty Utilities repairs had been made to the plant that distributes water to the campus and that the water pressure had increased.

The university's Facilities Management department confirmed that water pressure had been restored.

Friday morning, the office of Residential Life began inspections of each residence hall and each room and bathroom, which included turning on and off faucets at each sink, turning on each shower, and flushing each toilet to ensure appropriate water levels and that there were no discolorations.

Although discolored water is not unsafe, the staff considers it a nuisance and wants students to be able to avoid it.

In addition, all safety systems on campus were tested.

According to Alexander, Residential Life will notify students once it is time to return.

On Thursday, Aramark, UAPBs dining service, delivered the first day of hot meals to students in hotels and CARES funds were also disbursed to students who qualified.

"We recognize the emotional and mental strain this crisis is having on our students," said Alexander, who added that counseling services are available through the Student Counseling, Assessment, and Development (SCAD) Center.

A laptop loan program was also implemented for the students to continue their virtual courses remotely.

Originally scheduled to return to in-person learning on March 1, students will now wait a while longer because of the water crisis, according to Robert Carr, vice chancellor for academic affairs.

"We will have face-to-face instruction this semester, but at the latest, we are looking at is March 29," said Carr. "If we can accomplish it before then we certainly will do that."

Students complained of professors not granting extensions due to events out of their control.

Because of the disruptions to learning, Carr said, the university would be open to having a conversation about how grading would work.

"We care about you and we want to see you do well," said Carr, who told the students if they were having issues with faculty members and they were not granted extensions, to reach out to his office.

"We understand that this is a very difficult time and what we want to do is talk about what our grading schedule will look like for the rest of the semester," Carr said. "We may be able to adjust it."

Braque Talley, vice chancellor of Enrollment and Management, said student success coaches are available for the students if they are having challenges with their classes or communicating with their professors.

Kymara Seals, president and chairman of the board for UAPB and AM&N National Alumni Association, thanked Alexander and university officials for taking the time to visit with the students, parents and alumni and give them the latest information possible.

"In order to be good ambassadors, we needed accurate information," Seals said during a videoconference held earlier this week.

Seals, as well as the Pulaski and Jefferson County alumni chapter, have been instrumental in providing support and aid to the students displaced at the various hotels throughout Jefferson County and Little Rock.

"It's been a tremendous outpouring of support from the community," said Elbert Bennett, vice chancellor for Student Affairs, who added that some of the students' families were also impacted by the crisis in Texas. "We are working with outside organizations who want to give monetary donations to help out."

Jamal Gordon, who attended UAPB and is the owner of The Leaf Cigar and Pipe Shop, also contributed early on during the crisis, stating some of his customers were affected by the water crisis on campus.

"I know they are used to having a buffet of food and snacks so we decided to get food and personal hygiene items just in case they were in a rush and forgot to grab those items," said Gordon, who teamed up with Wallace Florist.

Many of the student-athletes were on the road during the time when students were asked to evacuate the campus but once they returned, they were also housed in area hotels.

"We served the volleyball, the golf, and the female softball team," said Gordon, who noted non-sport students were served as well.

Alexander said he hopes all the students use this experience to build on, stating the trials they have faced will strengthen their character.

"What we faced was a perfect storm in this catastrophe of things going wrong with our water supplier and that's unfortunate and outside of our control," Alexander said. "These are things that we cannot control, but one thing about it is I hope that our students understand that we are about education and that they came here for a purpose and we want them to get that purpose. We want them to get their education in the midst of a storm."