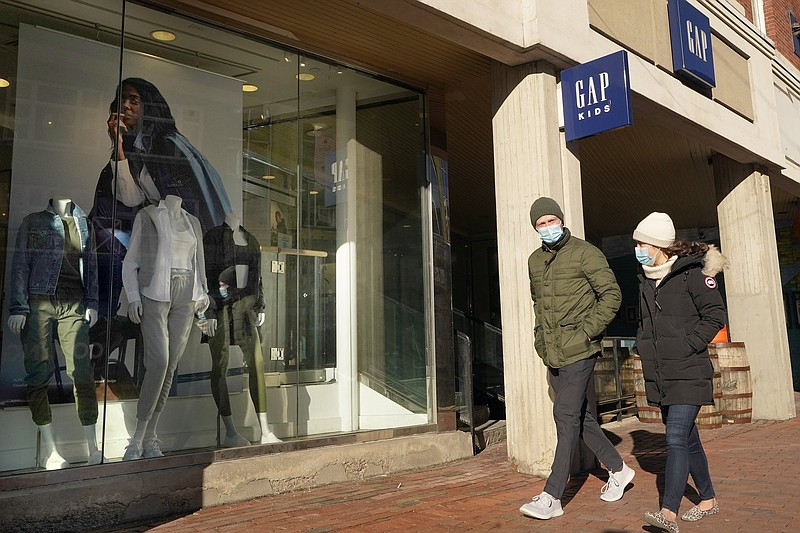 Passers-by walks near an entrance to a Gap clothing store, Thursday, Feb. 25, 2021, in Cambridge, Mass. Bouncing back from months of retrenchment, America’s consumers stepped up their spending by a solid 2.4% in January in a sign that the economy may be making a tentative recovery from the pandemic recession. Friday’s report from the Commerce Department also showed that personal incomes, which provide the fuel for spending, jumped 10% last month, boosted by cash payments most Americans received from the government. (AP Photo/Steven Senne)

U.S. personal incomes soared in January as Americans received another round of pandemic-relief checks, helping to recharge the economy with the strongest spending advance in seven months.

The 10% gain in incomes exceeded forecasts and was the largest in nine months, a Commerce Department report showed Friday. Purchases increased 2.4%, after a downwardly revised 0.4% decline in December.

The increase was largely driven by purchases of goods, while purchases of services lagged as the pandemic continued to weigh on the leisure and hospitality industries.

The January spending increase followed two straight monthly spending drops that had raised concerns that consumers, who power most of the economy, were hunkered down, too anxious to travel, shop and spend.

Last month's sharp gain suggests that many people are growing more confident about spending, especially after receiving $600 checks that went to most adults last month in a $900 billion pandemic aid package passed in December.

Besides the direct checks, the bill supplemented state jobless benefits with an extra $300 a week.

While many have saved the government support, the robust increase in spending shows others are spending it.

"The economy weakened late last year as the fiscal support faded and the pandemic intensified, but now it seems to be coming back to life," said Mark Zandi, chief economist at Moody's Analytics.

In testimony to Congress this week, Fed Chairman Jerome Powell downplayed any inflation risk and instead underscored the economy's struggles. Layoffs are still high. And 10 million jobs remain lost to the pandemic that struck nearly a year ago. That's a deeper job loss than was inflicted by the recession of 2008-2009.

Still, despite the weakened job market, key sectors of the economy are showing signs of picking up as vaccinations increase and government rescue aid works its way through the economy. The Fed's ultralow-rate policy is providing important support as well.

Friday's report showed that consumers increased their purchases of durable goods -- from autos to appliances -- by 8.4% last month. The increase was led by spending on autos, household appliances and recreational goods. Spending on nondurable goods rose 4.3%, with solid gains in demand for clothing and food.

By contrast, overall spending on services, which has been hurt for months by the reluctance of many consumers to venture out of their homes, rose just a modest 0.7%. But the weakness reflected in part a drop in spending on utilities. More encouraging was that spending on restaurants and hotels rose 5.7%. Further gains are likely in coming months if viral cases keep falling and vaccines are more widely administered.

Consumers saved a significant chunk of their income last month: The personal savings rate jumped to 20.5% from 13.4% in December. It was the highest savings rate since May in the aftermath of pandemic's appearance. With so many Americans forgoing out-of-town travel, shopping trips and indoor dining, the savings rate has been climbing, contributing to expectations for a surge in spending once more people feel comfortable resuming their previous spending habits.

Gregory Daco, chief economist at Oxford Economics, said he thinks the high savings rate, combined with pent-up consumer demand and further federal aid, will lift economic growth this year to 7%. That would be the strongest calendar year growth since 1984.

"An economic liftoff can be sustained with an improving health situation and more stimulus," Daco said. "The combination of a healthier economy and more government stimulus should generate a strong rebound by the middle of the year."

Lawmakers are moving forward with President Joe Biden's $1.9 trillion aid plan that has the potential to drive even more income growth. Another round of stimulus checks paired with a child tax credit and an increase in weekly unemployment benefit payments would buoy disposable income in the coming months.

Throughout the pandemic inflation metrics have been very weak, but price pressures are building in pockets of the economy. The index of consumer prices that the Federal Reserve officially uses for its target rose 1.5% in January from a year earlier. That was the largest gain in nearly a year, but well below the Fed's 2% target.

Concerns that a strengthening economy will accelerate inflation have sent bond yields surging.

The path of inflation has been the subject of much debate in recent weeks. While so-called base effects will temporarily push inflation metrics higher in the next few months, Fed Chairman Powell has repeatedly emphasized his expectation that any jump in prices will likely prove temporary. Others who believe the price pressures will prove more lasting point to another large stimulus package and pent-up demand.

Information for this article was contributed by Reade Pickert of Bloomberg News (TNS), by Martin Crutsinger of The Associated Press and by Sydney Ember, Ben Casselman, Matt Phillips and Jeanna Smialek of The New York Times.