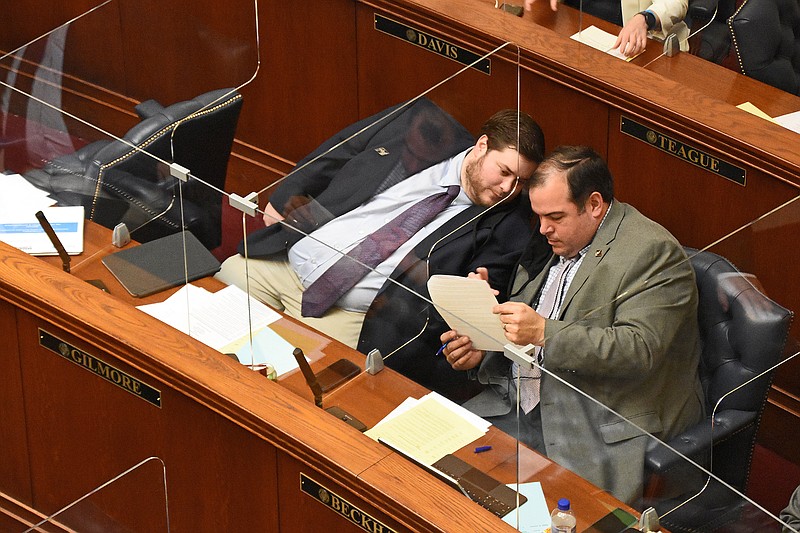 Arkansas' version of Medicaid expansion that provides health care coverage for more than 300,000 low-income Arkansans would be called the Arkansas Health and Opportunity program or ARHOME under legislation expected to be filed this week.

The state's Medicaid expansion program -- which was initially authorized as the private option by the Legislature in 2013 -- is now called Arkansas Works under Republican Gov. Asa Hutchinson.

The program provides private health insurance coverage for adults earning up to 138% of the federal poverty level, which is $17,774 for a single person and $36,570 for a family of four.

The program's enrollment totaled 311,511 Arkansans as of Feb. 1, up from about 250,233 on March 1, 2020, before the coronavirus pandemic arrived in Arkansas, according to the state Department of Human Services' website.

The state work requirement for the program hasn't been enforced since a federal judge ruled in March 2019 that federal law didn't allow then-President Donald Trump's administration to authorize that requirement in Arkansas. That ruling has been appealed to the U.S. Supreme Court. President Joe Biden's administration last week asked the U.S. Supreme Court to cancel March 29 oral arguments in the case, saying that it has "preliminarily determined" that the work-related requirements would "not promote the objectives of the Medicaid program."

The state law for the Arkansas Works program and the federal waiver for the program expire Dec. 31.

Hutchinson said Friday that "this new initiative has been developed with the General Assembly and will allow us to continue providing affordable health care in Arkansas and addressing in innovative ways the need for improved maternal health and increasing access to comprehensive care in our rural areas."

Rep. Michelle Gray, R-Melbourne, said Friday, "I love what we have done with this" new program, which also include targeting certain populations such some veterans, and some of those formerly in foster care.

She noted that in the 2014 election, she campaigned against the state's Medicaid expansion when it was called the private option.

After serving on the Legislature's Health Reform Task Force in 2015 and 2016, Gray said she realized the program is needed to keep rural hospitals open.

"Now, I fully support the expansion based on what we have been given by the federal government," she said. "You have to be pragmatic and govern."

Gray said she will be the House sponsor of the legislation for the new program that she expects to be filed Monday by Sen. Missy Irvin, R-Mountain View.

Human Services Secretary Cindy Gillespie, Hutchinson, Gray and Irvin will hold a news conference to discuss the legislation at noon Monday at the Capitol, according to the department.

The Medicaid expansion program has deeply divided Republicans over the past several years.

Senate Republican leader Scott Flippo of Mountain Home -- who was elected to the Senate in 2014 after defeating one of the legislative architects of the private option program, then-Rep. John Burris, R-Harrison, in a runoff election -- said he hasn't made any firm commitments about the new program.

"It is still an ongoing conversation regarding ARHOME," he said Friday in an interview.

Flippo said he wants greater accountability features in the new program for things such as improved health care outcomes for its participants.

Human Services Department officials have been working with legislators for several months to design a new program to replace Arkansas Works that slows the growth in state spending, moves people out of poverty through work and education, and addresses some long-standing health issues such as maternal and infant health, said department spokeswoman Amy Webb.

While the new program is designed to slow the growth in state spending for the population enrolled in the program, it also would maintain the economic and fiscal benefits of the Arkansas Works program, Webb said.

"It will do that by requiring the private health plans to meet annual financial targets, by capping payments to health plans at the annual budget neutrality limit in our approved waiver and by holding health plans responsible for full collection of enrollees' cost-sharing obligations," she said.

Under the proposed program, people who work and do other activities, such as continue their educations, will have access to the private insurance plans, which provide more timely access than the traditional Medicaid program, Webb said.

"This path allows people to achieve long-term economic independence," she said in a written statement. "People who do not choose this path will get coverage through the traditional-fee-for-service Medicaid program." This means it's not a work requirement, but an incentive, according to Webb.

Webb said no one would lose their health care coverage for failing to meet certain benchmarks under new program.

"What may happen is enrollees who are in qualified health plans may choose not to work, get their education or pursue other activities that help them move toward economic independence. In those cases, they will get traditional Medicaid coverage instead," she said.

The specifics of how program participants are engaged will be developed over time with the input of the qualified health plans and public and private resources that have experience in working with individuals living below the federal poverty level on taking advantage of employment and education opportunities, Webb said.

The majority of the people enrolled in the Medicaid expansion program are working at least part time, she said.

"Clearly this group is already 'engaged' in moving towards economic independence," Webb said. More than 108,000 enrollees in October also had a dependent child.

The largest single age cohort of the October enrollees with income below 25% of the federal poverty level were 19-24 years old, and some of these were still working on their educations and others were beginning their employment experience, she said.

Some people in the program will be working to increase their earnings and will be enrolled for less than six months, Webb said. They will have no need of engagement.

"We are developing different engagement opportunities for people in different situations based on age, income level, employment experience, how long they have been enrolled, those at most risk of long-term dependency and family situations," she said.

Webb said about 84% of the Arkansas Works' population is enrolled in qualified health plans.

These plans pay hospitals and other medical providers commercial rates, higher than what providers receive for populations enrolled in the traditional fee-for-service Medicaid program, according to a 19-page presentation on the proposed program from the department.

The new ARHOME waiver program would continue to enroll low-income people in the qualified health plans and would bring an estimated $9.76 billion from the federal government into the state's economy for the next five years, the department estimates.

If Arkansas paid fee-for-service rates instead, the federal government would send an estimated $6.75 billion to the state -- a reduction of $3.01 billion over the five-year period -- according to the department. That would mean significantly lower payments to hospitals, doctors and other health care professionals, the department said.

If Arkansas paid fee-for-service rates through the ARHOME waiver program, the state would spend $180 million less, the department estimates. But the $3 billion in lost federal revenue would leave the state with $310 million less in state and local tax revenue generated, more than offsetting the reduction in state Medicaid spending, according to the department.

Though enrollment in the Arkansas Works program has increased by more than 60,000, to 311,511, as of Feb. 1 during the pandemic, Webb said that "at some point after the Public Health emergency enrollment will settle back to more historical levels."

"We will take administrative actions if necessary to keep the [qualified health plans] insurance pool large enough with a population mix to ensure a healthy and stable market," she said.

The Human Services Department's Division of Medical Services appropriation, which provides spending authority for the Medicaid expansion program, requires a three-fourths vote, or 75 votes in the 100-member House of Representatives and 27 votes in the 35-member Senate.

That's often been a difficult threshold to meet over the years. The Medicaid expansion was initially approved by the Legislature in 2013.

In last year's fiscal session, the Legislature approved an appropriation that granted spending authority for the Medicaid program, which the department projected would spend $9 billion in fiscal 2021 that ends June 30 -- $7.1 billion in federal funds and $1.9 billion in state funds.

The department last week didn't have cost projections for state and federal funds for the Medicaid program and for the Arkansas Works program for fiscal 2022.

Hutchinson said Friday that a three-fourths vote in the Legislature "is always a challenge, but with early legislative support, I am optimistic that this will pass with sufficient support."

Sen. Jonathan Dismang, R-Searcy, who was one of the legislative architects of the private option program, said Friday, "We have had that debate before and I'm not sure how it will play out this session."