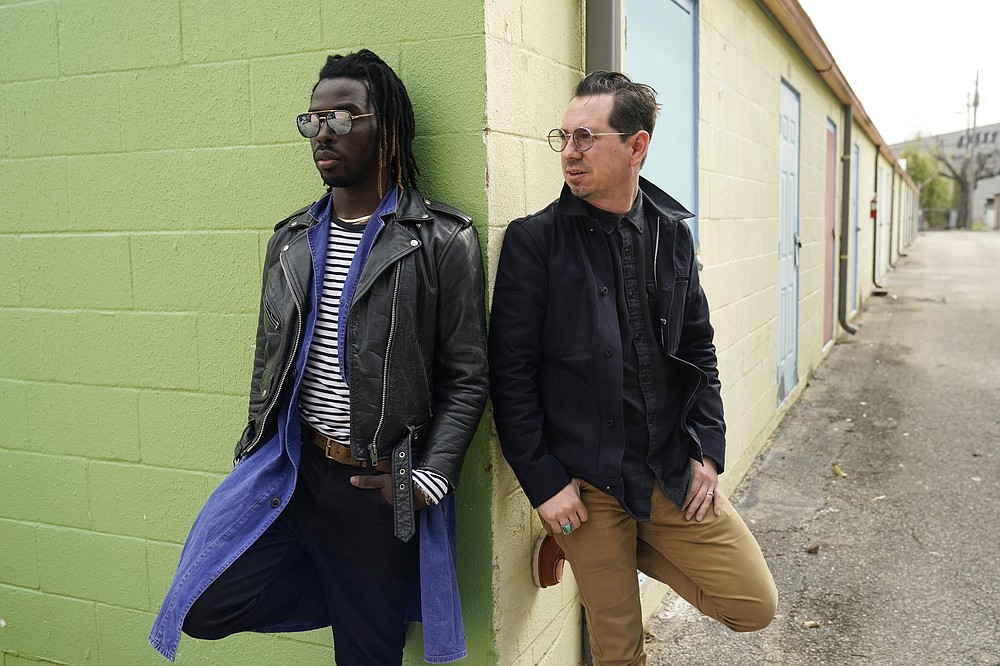 NASHVILLE, Tenn. — When Eric Burton and Adrian Quesada first started playing together in an Austin, Texas, studio in 2017, they had just met each other and weren't even entertaining the idea that one day they'd be performing live.

"We weren't really a band. We were a studio project," said Quesada, a veteran guitarist-producer who had been honing his craft for years in about a half dozen bands.

"I just knew that it was going to be something enchanting and very beautiful just between the both of us," said Burton, who sings, writes and plays guitar. "I don't think that we could ever have guessed that we'd end up playing [President Joe Biden's] inauguration and being nominated for [three] Grammys."

But creativity sparked in Quesada's analog studio and this cross-cultural fusion of retro and modern, psychedelic rock and soul became Black Pumas, going from under the radar to breakout band in just a few short years.

After releasing their self-titled album in 2019, Black Pumas earned their first nomination for best new artist at last year's Grammy Awards, but they lost when Billie Eilish swept the awards show. They are back again with three nominations for album of the year, record of the year and best American roots performance.

Quesada, 44, is used to getting the question about the "overnight" success of their band, but back-to-back nominations in the top Grammy categories makes him think of all the hard work they both had put in before they met each other.

Burton, 31, was raised in the San Fernando Valley and grew up singing in church, then moved on to musical theater. He busked at the Santa Monica pier to raise a little money before making his way to Austin where he sang at the corner of Sixth Street and Congress Avenue.

Quesada is a man of multitudes: he was part of the Grammy-winning Latin funk band Grupo Fantasma, which also had gigs as a backing band for Prince, and later played in bands such as Brownout and Echocentrics. Before Black Pumas, Quesada produced an album in 2019 of Chicano-Texas soul music that brought new light on the contributions of Hispanic artists and music.

"It's like this perfect intersection of Black, brown, white, all kinds of different people," he said of soul music. "What I love about it is it's actually the most inclusive."

They were playing in Europe when the pandemic hit and shut down touring, so they did what came natural to them. They went back into the studio and recorded new songs and live versions for a 2020 deluxe edition of their debut record that includes fantastic covers of the Beatles' "Eleanor Rigby" and "Fast Car" by Tracy Chapman.

Their song "Colors" has been a No. 1 hit on Triple A stations and got some love from Top 40 and rock radio as well, but they are an underdog in the record of the year category alongside platinum hits by Eilish, DaBaby, Doja Cat, Post Malone, Dua Lipa and Megan Thee Stallion.

But the momentum of the band earned them a chance to perform the uplifting anthem as a part of President Biden's inauguration night TV special.

The duo doesn't easily fit into genre lines with songs inspired by gospel, funk and '60s era rock, but anchored by a tight percussive and modern beat. The pair, who won emerging act of the year at the 2020 Americana Honors and Awards, said they let their label decide what genre categories to nominate them in.

"One thing we have in common is we also didn't want to be just a soul band," said Quesada, who said they both are heavily influenced by hip-hop rhythms as well. "We like it kinda being rock 'n' roll."

Burton said their first album together felt like a handshake and now they really know each other's musical tastes as they go back in the studio to start on their second album, which he promises will be different from the first.

"My favorite thing about what we do is that we have successfully made something that feels very familiar yet relevant and new and fresh," Burton said.