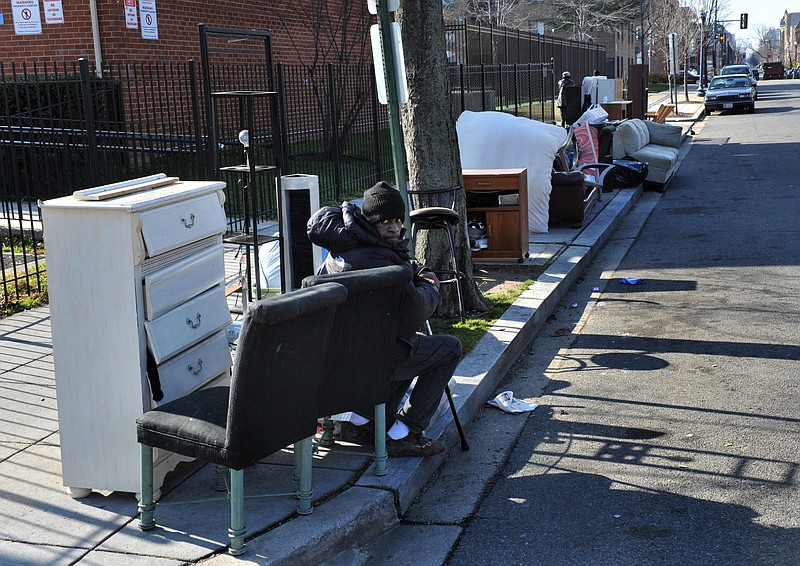 Billy Sullivan watches the furniture of a friend who was evicted from her church-owned apartment building in D.C. on Jan. 25, 2012. MUST CREDIT: Washington Post photo by Jahi Chikwendiu

In a move that has triggered confusion across the nation's housing market, a federal judge in Texas issued a ruling on Thursday knocking down the Centers for Disease Control and Prevention's eviction moratorium as unconstitutional.

"Although the covid-19 pandemic persists, so does the Constitution," Judge J. Campbell Barker of the Eastern District of Texas wrote in his 21-page order filed on behalf of landlords, arguing that the federal government overstepped its authority with the CDC order.

The latest development may complicate, not clarify, the situation for renters. Federal judges in Georgia and Louisiana have previously denied challenges to the protection.

Legal experts differ on how the Texas decision alters the landscape.

"The CDC order has been struck," said Robert Henneke, the general counsel for the Texas Public Policy Foundation and lead attorney representing the landlords in the Texas case. "It doesn't exist anymore. It's unconstitutional."

"The CDC moratorium is still active," countered Emily Benfer, a visiting professor of law at Wake Forest University. "Tenants can still exercise their rights under it across the country."

The government has yet to signal whether it plans to appeal the decision. "In the meantime, that means uncertainty for renters," said Diane Yentel, president and chief executive of the National Low Income Housing Coalition.

The CDC eviction moratorium, signed by President Donald Trump in September and extended by President Joe Biden until March 31, has had a rocky tenure.

As the coronavirus forced large swaths of the economy to grind to a halt in 2020, experts warned that the nation's residential real estate sector would face a reckoning.

In August, the Housing Coalition, the Aspen Institute Financial Security Program, and the COVID-19 Eviction Defense Project released a report warning that as many as 40 million American renters could face eviction.

State and local governments stepped in with their own eviction pauses in the pandemic's early days. But in many states, such as Maryland and Virginia, those protections ran out by the end of summer.

The federal government acted in early September with the CDC moratorium. Framed in terms of public health, the Trump administration announced a freeze on all nonpayment of rent cases for tenants who signed a declaration. The order, however, did not wipe away a tenant's debt or supplement the landlord for delayed rent payment.

The moratorium's own wording left room for legal interpretation, and state supreme courts issued their own guidance to judges about how to execute the order, guidance that often varied from state to state. Housing advocates complained that evictions continued because of loopholes in the order. Meanwhile, landlord advocates complained that the order also didn't include rental relief. Despite guidance issued by the CDC in October that attempted to clarify the moratorium, confusion continued, and a handful of cases were filed challenging the provision on behalf of landlords.

In the Texas case, Barker did not issue a nationwide injunction, a move that would have made it clear that it applied beyond the Eastern District of Texas. He did, however, suggest that he would issue such an injunction if the federal government does no abide by his ruling.

"If they do get an injunction, that would be disastrous," Yentel said. "That would mean overnight the protections from the order would not be there."

Regardless of how the Biden administration responds, some owners are likely to take the ruling as a positive signal..

"The protections still stand now, but I do think there will be landlords now taking cases to local housing courts and filing evictions by citing this case," Yentel said.