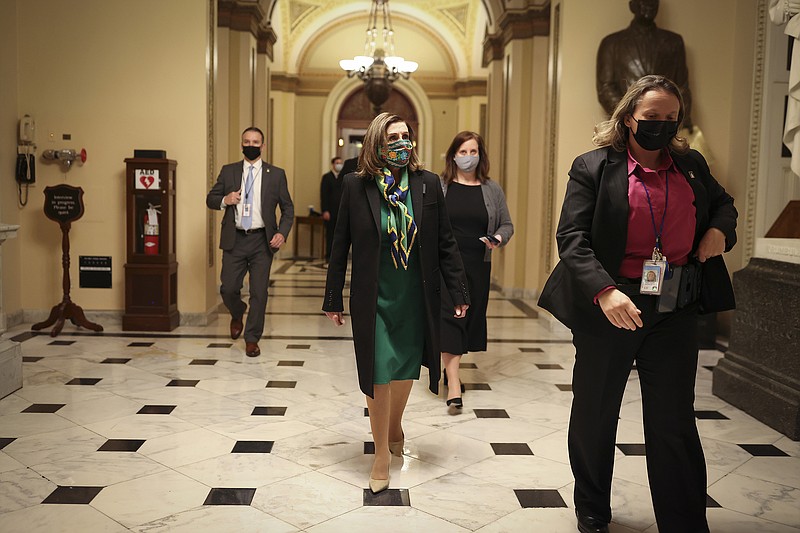 House Speaker Nancy Pelosi (D-Calif.) walks to her office from the House chamber after a vote at the Capitol in Washington, early Saturday morning, Feb. 27, 2021. The $1.9 trillion pandemic aid bill narrowly passed the House, but now must maneuver through a procedural and political thicket in the Senate. (Oliver Contreras/The New York Times)

WASHINGTON -- Senior Democratic lawmakers trying to find a backup plan to a minimum-wage increase are exploring a tax penalty on companies with more than $2.5 billion in gross receipts that do not pay at least $15 an hour, according to two people familiar with the matter.

The measure, which aides cautioned was still under discussion and subject to change, would aim to levy a 5% annual tax on such large corporations, according to the two people, who spoke on condition of anonymity to share details of private deliberations. Democrats might aim to increase the penalty over time for large companies that do not increase their wages, though that provision is also preliminary and could change, the people said.

The plan being discussed would overwhelmingly hit companies in the Fortune 1000, many of which have seen record profits during the pandemic. The penalty probably would start almost immediately after the passage of legislation.

Senate Finance Committee Chairman Ron Wyden, D-Ore., and Senate Budget Committee Chairman Bernie Sanders, I-Vt., called on Democrats to pursue these levies after the party was dealt a setback on its original plan to raise the minimum wage.

The Senate's parliamentarian said Thursday that the $15-an-hour minimum wage is inadmissible under the rules of the procedure that Democrats are using to pass President Joe Biden's $1.9 trillion stimulus bill with a narrow majority. The White House has ruled out overruling the parliamentarian, and centrist Democrats such as Sen. Joe Manchin III of West Virginia have said they would not change the rules of the filibuster in the Senate, imperiling the provision.

"It is cold comfort to know that majority support for raising the minimum wage could be meaningless because of arcane Senate rules," Wyden said in a statement last week. "We couldn't get in the front door or the back door, so we'll try to go through the window."

[Video not showing up above? Click here to watch » https://www.youtube.com/watch?v=6iVEz5VkYgM]

But the backup plan on the wage increase faces significant political and practical hurdles.

Economists say administering such a tax could prove complicated and create tax games in which corporations could avoid paying the penalties and raising worker pay. The vast majority of minimum-wage workers do not work at giant corporations. And it remained highly uncertain whether the rest of the congressional Democratic caucus would go along with the plan being discussed by Wyden and Sanders. The White House has not yet taken a position on the measure.

"We just got that today, and it's a complicated piece of work. We're going to have to look at that very carefully," Jared Bernstein, a member of the White House Council of Economic Advisers, told MSNBC on Friday.

The House included the $15-an-hour minimum wage in the $1.9 trillion stimulus package it passed in the early morning hours of Saturday.

The House voted 219-212 for the bill, a sharp break from previous aid packages that drew wide bipartisan support. No Republican in the House voted for it, including all four of Arkansas' representatives. Two House Democrats also voted against it.

"It's time to act," he said, adding that an "overwhelming" percentage of Americans support the legislation.

Treasury Secretary Janet Yellen said in a two-part tweet that the stimulus bill "ensures that people make it to the other side of this pandemic and are met there by a strong, growing economy."

For the bill to pass the Senate, Biden will need to woo Republican support or avoid losing a single Democratic vote.

Senate Republicans are not expected to vote for the bill. On Thursday, Sen. Tom Cotton, R-Ark., said Democrats "are exploiting a crisis to make us pay for their pet projects."

Rep. Devin Nunes, R-Calif., on Saturday called Biden's stimulus plan a "slush fund" for Democrats to use over the next four years.

Pelosi brushed off those sentiments, describing the plan in a letter to colleagues as "coronavirus-centric."

Senior Democrats, including White House officials, have vowed to find another vehicle for approving the minimum-wage increase during Biden's administration.

"We will seek a solution consistent with the Senate rules, and we will do so as soon as possible," Pelosi said. "Updates will be ongoing."

Senate Majority Leader Charles Schumer, D-N.Y., is also exploring the tax penalties idea but has not formally endorsed it. Biden on Saturday didn't address the minimum-wage issue or the initiative in the Senate to place a tax penalty on big companies that pay lower wages.

Wyden and Sanders prefer a federal $15-an-hour minimum but argued that the new plan is better than doing nothing for workers. But they do not have much time.

Democrats agree that Biden must sign the bill into law before mid-March to prevent millions of Americans from losing unemployment benefits. The Senate will also need time to debate and vote on the bill. That gives Wyden and Sanders only about one week at most to write the complicated new tax measure and sell it to the entire Democratic caucus.

Potential land mines abound. One major question is whether the franchises of large corporations would be subject to the penalty.

Wyden has said his plan would include "safeguards" to prevent companies from either outsourcing or using contractors to avoid paying the $15-an-hour wage, though details are sparse.

Mark Weisbrot, co-director of the Center for Economic and Policy Research, a left-leaning think tank, said it would be "impossible" to monitor firms sufficiently to ensure they do not skirt the rules with subcontractors or by other means.

"Anybody who wants to pay less than $15 under these alternatives will do it," Weisbrot said. "So it's not going to do the job."

He added, "Democrats should just overrule the Senate parliamentarian."

Congressional Republicans have vowed to oppose the measure, with House Minority Leader Kevin McCarthy, R-Calif., on Friday calling it "stupid." Rep. Kevin Brady of Texas, the ranking Republican on the House Ways and Means Committee, has said it would penalize firms for employing young and low-wage workers.

The pandemic has concentrated attention on large employers that have not passed on profit to their employees. The Brookings Institution, a center-left think tank, found in December that top retail companies' profits increased by $17 billion compared with last year, or by 40%. The report also found that "with few exceptions," retail workers saw only minimal gains as a result, with surveyed companies increasing wages by 10%.

The United States has never gone longer without increasing its federal minimum wage in the eight decades since the law was passed.

"At most of the biggest retail companies in America, the gap between the struggles and sacrifices of low-wage frontline workers and the wealth they create for their employers and shareholders is wider than ever," the report said.

Information for this article was contributed by Jeff Stein and Erica Werner of The Washington Post; and by Josh Wingrove, Erik Wasson and Tony Czuczka of Bloomberg (TNS). 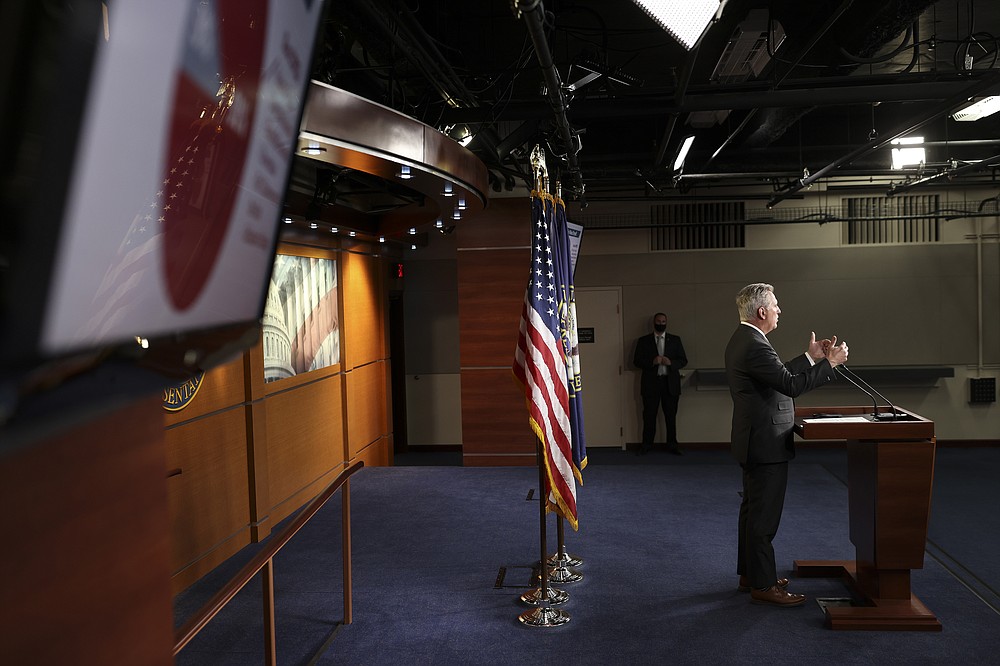