Dr. Omar Atiq’s generosity is beyond compare. Just ask his 200 cancer patients whose debts he canceled at Christmas. But Atiq remains a humble and empathetic oncologist. by Werner Trieschmann | February 28, 2021 at 2:37 a.m. 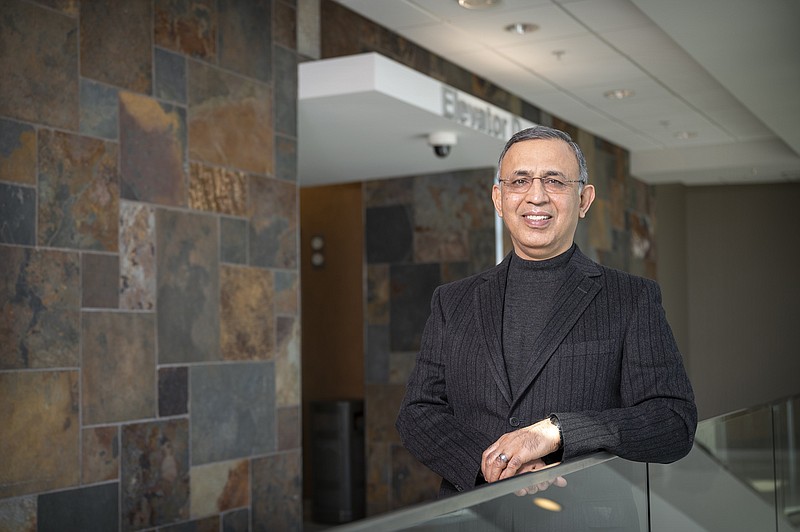 Make no mistake, the year 2020 was so spectacularly awful that it could use whatever good news that could be found.

Arkansas oncologist Dr. Omar Atiq provided a small remedy to the seemingly never-ending gloom with a singular notable gesture. In December Atiq's former Arkansas Cancer Clinic in Pine Bluff sent out Christmas cards to about 200 cancer patients. The cards said the balances owed by the patients -- which totaled roughly $650,000 -- were forgiven. Atiq and his clinic even coordinated their efforts with billing companies to make sure the patients' credit reports weren't dinged for overdue payments.

Atiq's gift did not go unnoticed or unappreciated. At a City Council meeting Pine Bluff Mayor Shirley Washington honored Atiq with a proclamation and said to the doctor, "The people of Pine Bluff are inspired by your generosity and are forever grateful for the lives you have saved and for the many lives you have touched."

The news wasn't limited to the city limits of Pine Bluff or even Arkansas. Atiq found himself the subject of an interview on "Good Morning America" and of stories from news organizations far and wide, including CNN. Proof that the world is indeed small and connected in incredible ways would be found as details of Atiq's generosity reached Pakistan, the country where the doctor was born.

"The reaction [to the story] was surprising," Atiq says. "My friends kept showing me stories. They showed me clips from Newsweek in Greek. My wife and I, when we decided to do this, we didn't think it was that big of a thing to do."

There's also no mistake Atiq's numerous accomplishments have deserved attention and notice well before his Christmas forgiveness of debts.

"He's phenomenal in every aspect," says Dr. Maurico Moreno, a head and neck surgeon who has worked with Atiq at the University of Arkansas for Medical Sciences for 10 years. "He's a leader in the field of medical oncology."

Moreno remains impressed with Atiq's "laser focus" on the patients under his care and how in meetings he knows the "minute details."

"For all his accomplishments both personal and professional," says Moreno of Atiq. "He is a very humble person. This comes across to his patients. He has a way of being frank [with the people he treats] as well as being empathetic."

Pakistan is a South Asian country which borders India to the east, Afghanistan to the west and Iran to the southwest. Today, the country has a population of 212 million, making it the fifth largest country by populace in the world.

Atiq was born in Peshawar, which is the capital and the largest city of the Pakistan province of Khyber Pakhtunkhwa.

"My father was a lawyer," Atiq says. "And my mother took care of us at home. I have one younger sister, who is also a physician."

As his father was posted to different cities in the province, the family had to move a few times when Atiq was young. Eventually they returned to Peshawar and Atiq attended St. Mary's, a missionary school. An early happy memory for Atiq is going back and forth to school on his own.

"I would play field hockey," Atiq recalls. "I could ride my bike home and have my lunch, do a little homework and go back to play field hockey. Yes, field hockey was what I really liked to do though I was never as good as I wanted to be."

Atiq felt safe and free in his neighborhood in the bustling city of Peshawar. He lived in a distinct section of the town.

"The British built cantonments or military garrisons for their troops and officers in major cities around the country," Atiq says. "Those areas had better civic amenities. After [the British] left, the local population bought homes in those areas. We lived in the Peshawar Cantonment."

Before his eighth grade year Atiq passed a competitive exam that meant he was eligible to attend boarding school. For the next four years Atiq was a student at Cadet College Hasanabdal.

"My father grew up in pretty challenging circumstances," Atiq says. "He is a self-made man. His mother died when he was 3. Three of his four siblings died. His life and his efforts have had a great impact on me. My parents believe that I should have the best education available. Being overwhelmed by school or schoolwork wasn't in the cards."

Cadet College Hasanabdal suited Atiq quite well. The bustling school had 500 students spread through the four grades. The rigorous schedule that put the young students through their paces -- "we had to make our own beds, polish our own shoes" -- made a lasting impression on Atiq.

"The entire institution was geared toward excellence," Atiq says. "Not only did [the school] help build the academic careers of young men but it molded personalities by teaching universal values of honesty and hard work."

Atiq was named a dorm commander in the ninth grade. He says the habits instilled by the boarding school have stayed with him to this day.

During his time at the boarding school was when Atiq made the decision to pursue a medical career. He doesn't attribute this decision to a singular, a-ha moment but instead to a conclusion reasoned out over time.

"What is it I want to do when I grew up," recalls Atiq. "How do I live my life? I knew I wanted to write my own paycheck. I didn't want to have a job where somebody else signed my paycheck. I had two options -- become a lawyer and become a doctor. I looked at both. The second thing I wanted to do was travel. Laws are particular to the country you are in. Medicine is universal. You can practice medicine almost anywhere. Also, when I was contemplating what to do, my mother said, 'One lawyer is enough in the house for now.'"

As a standout student at the Khyber Medical College in Peshawar, Atiq's decision about where he would go after graduating was getting attention. There was hope that Atiq would follow the same path as most of the graduates of the medical college -- go to Britain to finish medical training and then return to practice medicine in Pakistan. Atiq was letting it be known that he wanted to go to the United States.

"Actually the dean of our medical school and a number of professors had heard about what I wanted to do and tried to dissuade me. My father was also receiving some nice, friendly pressure to persuade me to stay there. Again, my parents supported me. My father said, 'It's your life and you do what you want with it.'"

The language barrier wasn't a problem as Atiq had been taught lessons in English since he was in pre-school. Atiq saw doctors from the United States as role models for the kind of medicine he hoped to practice.

"I saw physicians from U.S. -- those who were trained elsewhere -- approach their patients with humility. Their training was excellent. That was my perception."

A residency at Loyola University of Chicago led to a prestigious fellowship at the Memorial Sloan-Kettering Cancer Center in New York. Atiq says his time at Sloane-Kettering was a "tremendous three years of training" and that "almost every type of cancer you can think of you saw there."

At this point in Atiq's life he was married to his wife, Mehreen, and had a couple of pre-kindergarten age children. Atiq says he was about to sign on for a permanent position at Sloane-Kettering when he took a call from the Jefferson Regional Medical Center in Pine Bluff. Would he be interested in coming to Arkansas for a job at the Medical Center?

"I asked a cousin where Arkansas was and was told it was north of Texas," Atiq says.

What Atiq remembers most about the interview is that he had to change planes in St. Louis and is how friendly the people in Pine Bluff and the hospital were.

"[Pine Bluff] was totally different than Manhattan," Atiq says. "We had 3- and 4 year-old kids and we could buy a house with a yard they could play in. The decision wasn't that hard."

Atiq has accomplished much in his 30 years in Arkansas -- as a physician and as a doctor. In 2013, he became the first nonwhite president of the Arkansas Medical Society. He was on the Board of Trustees for Pulaski Academy. For eight years he was vice chairman for the Arkansas Tobacco Settlement Commission.

He is clearly proud of the Arkansas Cancer Center he opened in 1999 in Pine Bluff.

"We had the first comprehensive cancer center in the state," Atiq says. "Everything the patient needed was under one roof. We never refused to see a patient."

The open door policy of Atiq's Cancer Center along with his forgiving the debts the patients accrued is all of a piece with the doctor's view of his profession.

"Frankly I despise the word 'provider,'" Atiq says. "That denotes a transactional relationship between the patient and the physician. It's an insurance industry word. I would like to think that all the physicians and nurses look at the person and manage the illness they have in the most appropriate way. If you take out that approach, then you need technicians to take care of people and not physicians."

In rare moments when he is not working Atiq tries to satisfy his itch to travel. His family -- three sons and one daughter, all either working physicians or on their way-- have made several trips to Pakistan. The doctor is always happy to return to Arkansas.

"You don't look back at life, you always look forward," says Atiq with great certitude. "All four of our children were raised here in Arkansas. This is home."