FDA signs off on third shot to fight virus 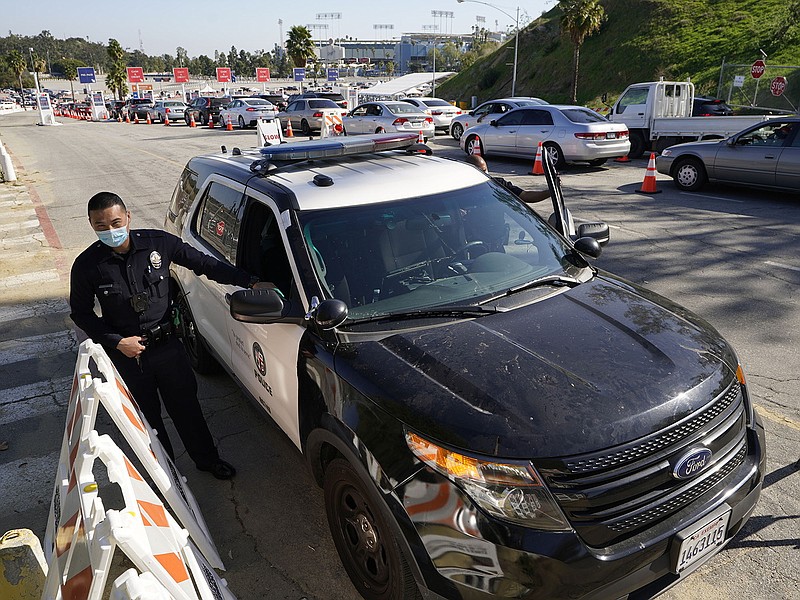 Los Angeles Police officers guard the main entrance to the vaccination center at Dodger Stadium as thousands of motorists wait in line for their vaccine without disruptions in Los Angeles Saturday, Feb. 27, 2021. A small group of anti-COVID-19 vaccine protestors demonstrated at a designated area in Elysian Park, outside the Dodger Stadium vaccination mass center. (AP Photo/Damian Dovarganes)

WASHINGTON -- The U.S. is getting a third vaccine to protect against the coronavirus, as the Food and Drug Administration on Saturday cleared a Johnson & Johnson shot that works with just one dose instead of two.

Health experts are eagerly awaiting a one-and-done option to help speed vaccinations, as they race against a virus that already has killed more than 510,000 people in the U.S. and is mutating in increasingly worrisome ways.

"This is exciting news for all Americans, and an encouraging development in our efforts to bring an end to the crisis," President Joe Biden said in a statement. "But I want to be clear: this fight is far from over," he added, encouraging people to stick with masks and other public health measures.

The FDA said the vaccine offers strong protection against what matters most: serious illness, hospitalizations and death. One dose was 85% protective against the most severe covid-19 illness, in a study that spanned three continents -- protection that remained strong even in countries such as South Africa, where the variants of most concern are spreading.

"This is really good news," Dr. Francis Collins, director of the National Institutes of Health, said Saturday. "The most important thing we can do right now is to get as many shots in as many arms as we can."

Shipments of a few million doses to be divided among states could begin as early as Monday. By the end of March, the company has said that it expects to deliver 20 million doses to the U.S., and 100 million by summer.

A U.S. advisory committee will meet today to recommend how to prioritize use of the single-dose vaccine. And one big challenge is what the public wants to know: Which kind of vaccine is better?

Collins said the evidence of effectiveness shows no reason to favor one vaccine over another.

Data is mixed on how well all the vaccines being used around the world work, prompting reports in some countries of people refusing one to wait for another.

[Video not showing up above? Click here to watch » https://www.youtube.com/watch?v=CFc7dLDjb_Y]

In the U.S., the two-dose Pfizer and Moderna shots were 95% protective against symptomatic infection. Johnson & Johnson's one-dose effectiveness of 85% against severe illness dropped to 66% when moderate cases were rolled in. But there's no apples-to-apples comparison because of differences in when and where each company conducted its studies, with the Pfizer and Moderna research finished before concerning variants began spreading.

"What people I think are mostly interested in is, is it going to keep me from getting really sick?" said Collins. "Will it keep me from dying from this terrible disease? The good news is all of these say yes to that."

Also, Johnson & Johnson is testing two doses of its vaccine in a separate large study. Collins said if a second dose eventually is deemed better, people who got one earlier would be offered another.

There are clear advantages aside from the convenience of one shot. Health officials are looking to use the Johnson & Johnson option in mobile vaccination clinics, and homeless shelters -- places where it's hard to be sure people will return in three to four weeks for a second vaccination.

The vaccine also is easier to handle, lasting three months in the refrigerator compared with the Pfizer and Moderna options, which must be frozen.

The FDA said studies detected no serious side effects. Like other covid-19 vaccines, the main side effects of the Johnson & Johnson shot are pain at the injection site and flu-like fever, fatigue and headache. The FDA said there is "a remote chance" that people may experience a severe allergic reaction to the shot, a rare risk seen with the Pfizer and Moderna vaccines.

The vaccine has been authorized for emergency use in adults 18 and older for now.

All covid-19 vaccines train the body to recognize the new coronavirus, usually by spotting the spikey protein that coats it. But they're made in very different ways.

Johnson & Johnson's shot uses a cold virus like a Trojan horse to carry the spike gene into the body, where cells make harmless copies of the protein to prime the immune system in case the real virus comes along. It's the same technology the company used in making an Ebola vaccine, and similar to covid-19 vaccines made by AstraZeneca and China's CanSino Biologics.

The Pfizer and Moderna vaccines are made with a different technology, a piece of genetic code called messenger RNA that spurs cells to make those harmless spike copies.

The AstraZeneca vaccine, already used in Britain and numerous other countries, is finishing a large U.S. study needed for FDA clearance. Also in the pipeline, Novavax uses a still different technology, made with lab-grown copies of the spike protein, and has reported preliminary findings from a British study suggesting strong protection.

As more vaccines are slowly becoming available, communities across the U.S. are seeing plummeting demand in covid-19 testing.

Just five weeks ago, Los Angeles County was conducting more than 350,000 weekly coronavirus tests, including at a drive-thru site at Dodger Stadium, as health workers raced to contain the worst covid-19 hot spot in the U.S.

Now, county officials say testing has nearly collapsed. More than 180 government-supported sites are operating at only a third of their capacity.

The drop in screening is occurring at a significant moment in the outbreak: Experts are cautiously optimistic that covid-19 is receding but concerned that emerging variants could prolong the epidemic.

"Everyone is hopeful for rapid, widespread vaccinations, but I don't think we're at a point where we can drop our guard just yet," said Dr. Clemens Hong, who leads the Los Angeles County's testing operation. "We just don't have enough people who are immune to rule out another surge."

U.S. testing hit a peak on Jan. 15, when the country was averaging more than 2 million tests per day. Since then, the average number of daily tests has fallen more than 28%. The drop mirrors declines across all major virus measures since January, including new cases, hospitalizations and deaths.

Officials say those encouraging trends, together with harsh winter weather, the end of the holiday travel season, pandemic fatigue and a growing focus on vaccinations are sapping interest in testing.

But testing remains important for tracking and containing the outbreak.

Biden has promised to revamp the nation's testing system by investing billions more in supplies and government coordination. But with demand falling fast, the country may soon have a glut of unused supplies.

The U.S. will be able to conduct nearly 1 billion monthly tests by June, according to projections from researchers at Arizona State University. That's more than 25 times the country's current rate of about 40 million tests reported per month.

Still, U.S. test manufacturers continue ramping up production, with another 110 million rapid and home tests expected to hit the market next month.

With more than 150 million new vaccine doses due for delivery by late March, testing is likely to fall further as local governments shift personnel and resources to giving shots.

"You have to pick your battles here," said Dr. Jeffrey Engel of the Council of State and Territorial Epidemiologists. "Everyone would agree that if you have one public health nurse, you're going to use that person for vaccination, not testing."

While testing is declining, the nation's coronavirus vaccine supply is expected to swell over the next few months, states and cities are rushing to open mass vaccination sites capable of injecting thousands of shots a day into the arms of Americans, an approach the Biden administration has seized on as crucial for reaching herd immunity in a nation of 330 million.

The Federal Emergency Management Agency has joined in, too: It helped open seven mega-sites in California, New York and Texas, relying on active-duty troops to staff them and planning many more. Some mass sites aim to inject at least 12,000 people a day once supply ramps up.

The drive-thru mass vaccination site on a defunct airstrip in East Hartford, outside Connecticut's capital, shows the promise and the drawbacks of the approach.

Run by a nonprofit health clinic, the site has become one of the state's largest distributors of shots since it opened six weeks ago, and its efficiency has helped Connecticut become a success story.

Most of the people running mass sites are learning on the fly. Traffic can get snarled on the busy road leading to the site, and bad weather can shut it down, requiring hundreds of appointments to be rescheduled on short notice. Finding enough vaccinators, already challenging for some sites, could become a broader problem as they multiply.

Health care providers or faith-based groups rooted in communities likely will be more effective at reaching people who are wary of the shots. And many of the huge sites don't work for people who lack cars or easy access to public transportation.

To address problems of access and equity, FEMA is opening many of its new mass sites in low-income, heavily Black and Hispanic neighborhoods where fear of the vaccine is higher, vaccination rates have been lower and many people lack cars.

In addition to its mass sites, Community Health Center, which opened the East Hartford site, is planning to send small mobile teams into neighborhoods to extend its vaccination reach.

Mobile vaccination clinics will reach some of the vaccine-hesitant. But Marcus Plescia, the chief medical officer for the Association of State and Territorial Health Officials, said people who are uncertain and fearful would be best served by doctors offices or community health centers where they can talk it through with health care providers they know.

"They're not there to counsel you," he said of mass sites. "You go to get the shot, end of story."

Friday in Houston, Biden described the federal government's mass inoculation drive as "the most difficult operational challenge this nation has ever faced logistically." He said he expected challenges in reaching people in remote areas and in persuading others who are "hesitant to take the shots."

With only about 9% of adults fully vaccinated to date, the kind of scale mass sites provide may be essential as more and more people become eligible for the vaccines and as more infectious variants of the virus proliferate in the United States.

Information for this article was contributed by Lauran Neergaard, Matthew Perrone, Ricardo Alonso-Zaldivar, Marion Renault, Brian Melley and Nicky Forster of The Associated Press; and by Mike Ives, Carl Zimmer, Noah Weiland and Sharon LaFraniere and Abby Goodnough of The New York Times.