Paraprofessional takes training to a higher level to help kids 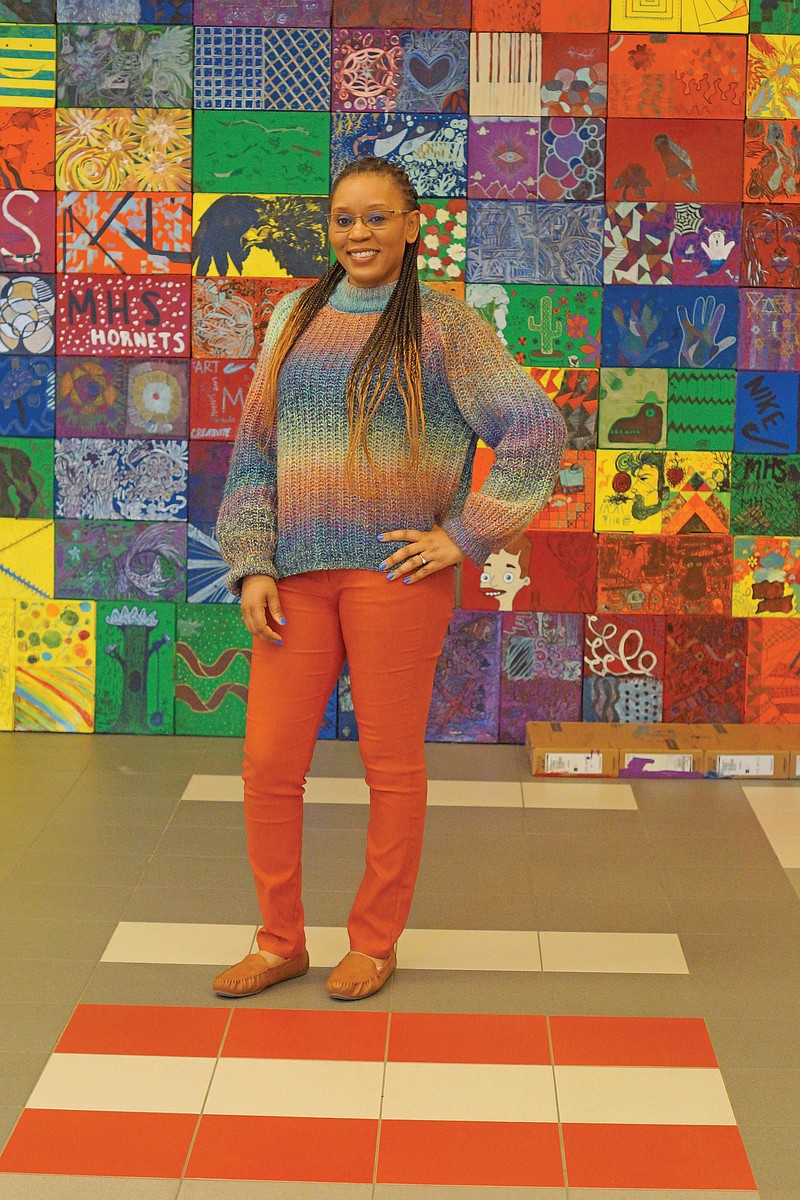 Nakia Morris stands in front of artwork made by Maumelle High School students from boxes their Chromebooks were in. Morris, who goes by Nikki, is the first paraprofessional in Arkansas to become a certified intervener with training in deaf-blindness. She had eye cancer as a toddler and has had a prosthetic eye since she was about 3 years old.

Nakia Morris, blindfolded and wearing ear plugs, had to make a peanut-butter-and-jelly sandwich in her own kitchen.

It was harder than she expected.

The exercise was part of her journey to become a certified intervener — the first in Arkansas to achieve that status — through the Paraprofessional Resource and Research Center.

Interveners have specialized training in deaf-blindness and the process of intervention. It took Morris, who goes by Nikki, more than a year to complete the requirements, from taking online classes to building a portfolio.

“Oh, my goodness, we learned so much more going into the deaf-blind world,” Morris said.

It’s a world the Pulaski County Special School District paraprofessional is familiar with, having worked one-on-one with special-needs student Riley McClanahan from when he was in Crystal Hills Elementary School until he graduated in 2020 from Maumelle High School.

Morris, 46, can empathize with those who have vision challenges. She had her right eye removed when she was 3 years old after being diagnosed with retinablastoma, eye cancer, at age 2.

“I had chemotherapy, and I lost all my hair,” she said. “I don’t remember any of it.”

She has had a prosthetic eye since her surgery at St. Jude Children’s Research Hospital in Memphis.

“As long as I can remember, I had one (a prosthetic). I never knew any difference; that’s all I knew. I only started wearing glasses when I turned 40; I had perfect vision,” she said.

She said most people don’t notice the difference in her right eye: “Some people think I have a lazy eye.”

Morris, who grew up in the small community of Palestine, said she was self-conscious and often “would keep my hair down over my right eye. When I got older, I thought, you know, I just thank you, Lord, for leaving me with vision.”

She said side effects from her disease include numbness in her fingertips. Morris makes accommodations for her vision. For example, she makes sure to get a seat in a movie theater or a room where she can look straight ahead and doesn’t have to look to the right.

“I will get a headache if I look to the right too long. It’s a strain. If I have those problems, imagine what problems the deaf-blind have, and they can’t even always communicate those problems to you,” she said.

Morris said she can’t remember a time when she didn’t want to work with special-needs children.

“I just always loved kids, being around kids, especially kids with special needs or who had disabilities or problems,” she said.

After she graduated from the Palestine-Wheatley School District, she took community college courses, then moved to Little Rock and became a certified nursing assistant through the Red Cross.

She worked as a teaching assistant for the Easter Seals preschool program in Little Rock from 2000 to January 2006, and Riley, a son of Michelle and Robert McClanahan of Maumelle, was in her class.

Morris became a paraprofessional for the Pulaski County School District in February 2006, serving as an aide for about two years for another student who also had been in the Easter Seals program; then she was matched with Riley and was with him for about 12 years.

“They have a precious, precious bond,” Michelle McClanahan said. She refers to Morris as “Mama Nikki.”

McClanahan said Riley, 22, was born healthy and to term, but he had a brain bleed at 2 weeks old.

“We knew the minute it happened, basically,” McClanahan said, adding that she was a nurse at the time. He is one of four children.

She said Riley is paralyzed on one side, is visually and hearing impaired and has a seizure disorder. He also has “life-threatening food allergies,” she said.

McClanahan said she has trained Morris on Riley’s medical issues, adding that Morris is in tune with his needs.

“You have to know what to look for and what to do. Some days he would just be off, and Nikki would know,” McClanahan said. She also said Riley is “outgoing, happy and funny, for the most part, and we’re blessed with that.”

She said Morris challenged Riley and would work hard to adapt his schoolwork in ways he could understand and complete it.

Although his speech is difficult to understand, Morris said, she has him repeat words slowly, after her, so that others may understand him.

Morris said she would start each day going over the calendar so Riley would know what to expect for the day. She enlarged the words on the calendar with a magnifying device so he could see them. For a previous vision-impaired student, Morris said, she would tape a spoon on the calendar and let the student feel it to represent breakfast.

Morris said Jennifer Walkup, educational consultant with the Arkansas Department of Education Division of Elementary and Secondary Education, asked her if she’d be interested in obtaining the special certification. Morris’ participation was approved by Stephanie Cole, the school district’s director of special education, and the district paid for it.

“I’ll said, ‘I’ll do it. … I won’t have to talk in front of people, will I, because I get so nervous,” Morris said, laughing. She had to video herself teaching Riley, however.

Morris said the certification experience caused her to change her approach to helping Riley.

“I learned that with Riley, I was being the Good Fairy,” Morris said.

For example, when she took him to art class, she would park his wheelchair and go gather all his supplies for him.

“I was helping him so much, I was handicapping him,” she said.

After what she learned, she started taking him with her to gather his supplies. Morris also had Riley ask for what he wanted instead of anticipating all his needs, “and he started doing that — ‘May I have juice? May I have this?’”

She also asked for his help in unbuckling himself from his wheelchair instead of just doing it for him.

“I was doing everything for him. I was just trying to make his life so much simpler, but you’re trying to prepare [the students] for doing without you. ‘Do with and not for’ is the motto of the deaf-blind intervener.”

The challenge to make a peanut-butter-and-jelly sandwich, blindfolded and wearing ear plugs, gave her insight into the deaf-blind world, she said.

“I see why they walk so slowly. I was scared I was going to bump into something, and I already know where everything is in my kitchen. Deaf-blind people have to move around in a world they really know nothing about,” Morris said.

McClanahan said it was invaluable to have Morris follow her son throughout his schooling and be another advocate for him.

“As a parent, you feel you are the advocate, you are the pusher, always the one out in front. That Nikki was part of that team is great,” McClanahan said. “We just wanted Riley to learn and be his best. We love Nikki, and she will always be a part of our family.”

Morris echoed the sentiment and said the McClanahans feel like family to her. Morris, who has four children, said, “[Riley] was like a son to me. He’s my little buddy; I miss him.”

McClanahan said going the extra mile for the certification shows Morris’ dedication, “for her (Morris) to say, ‘Oh, this program came up, and I can help him better.’ I love that you love my child, and I love that you’re willing to do whatever it takes to help him learn.”

Walkup said the certification is just another strength that Morris brings to her job.

“She was already a great paraprofessional, but this intense training puts her at the top of the most desired paraprofessionals (now an intervener) for students with dual sensory impairments,” Walkup said.

Morris said she has served in a small life-skills class at Maumelle High School since Riley graduated, and many of the skills she learned as an intervener can transfer to any student.

Although she doesn’t know if she’ll be placed with another deaf-blind student next year, Morris said, she wants to learn Braille and expand her knowledge of sign language.

“Anything to do with deaf-blindness is definitely on my list,” she said.