Rollout of shots in state at a snail's pace in places 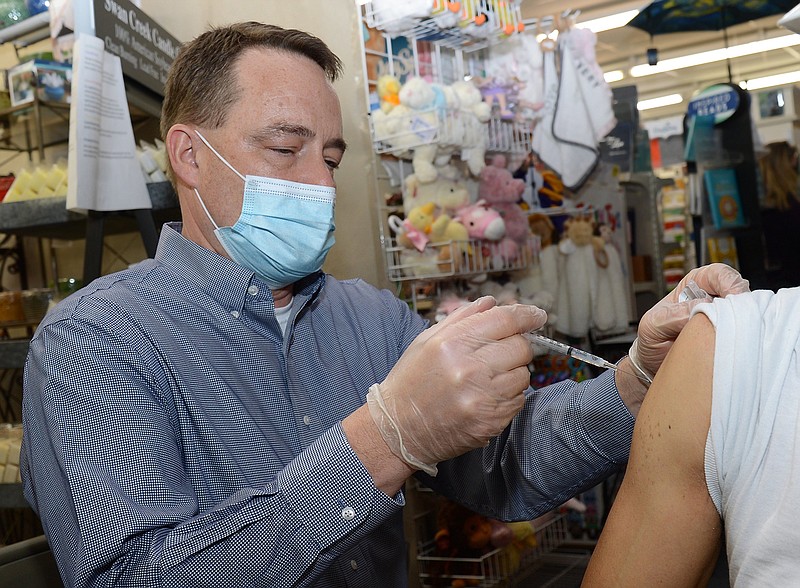 Robert Woolsey, pharmacist and owner at Medi-Quik Pharmacy and Gifts in Ozark, administers a dose of the Moderna Covid-19 vaccine on Thursday, Feb. 25, 2021. (Special to NWA Democrat Gazette/Brian Sanderford)

In the race for scarce vaccinations against the covid-19 disease, where Arkansans live -- their county of residence -- matters.

According to Arkansas Department of Health reports and interviews, success doesn't always split predictably between urban and rural counties, wealthy and poor.

In some places, quickly getting a potentially life-preserving vaccination can depend on arithmetic: How many phone lines exist to take calls, how many pharmacists' hands are available to hold syringes, how large is a drugstore's waiting space.

Both are midsize by state standards, with poverty rates between 18% and 21%. They are home to regional hospitals. Both border more populous areas.

In Franklin County, (county seats Ozark and Charleston), 19.8% of residents have gotten first doses. That's one of the state's highest percentages. Franklin County, with about 4,000 fewer residents than Hempstead County, has four pharmacies offering covid-19 shots.

Arkansas overall reported 16.2% of residents receiving first vaccinations against covid-19 as of Friday, according to the Health Department. A New York Times tracking effort set the state's average of first doses at 13%, just below a 14% U.S. average.

"We've struggled in southwest Arkansas," said Col. Robert Ator, who is coordinating Arkansas' vaccination effort. On average in counties surrounding the Hope and Texarkana areas, "we've only vaccinated about 6% of the population. As much vaccine as we keep sending down there, I'm not seeing a measurable jump.

"It's frustrating," Ator said in an interview last week.

Debbie Malek, 70, of Hope said she and her husband, Michael, struggled to sign up for shots, were promised return emails to set up appointments but didn't receive them.

She knew that the city's only pharmacy handling vaccinations for the public was overwhelmed with calls. So they watched social media, listened to friends, even called a state legislator for help.

Then a friend phoned to say appointments were available at a local Walgreens, which wasn't on the state's list of drugstores vaccinating the public. The couple got their first shots there Jan. 27.

"It's not a good, organized system," Malek said.

Carolyn Harrison of Charleston is happier about her experience.

She began "hounding" the staff at her pharmacy weeks ago. In her mid-60s, she wasn't eligible for the shots under state guidelines until last week.

Owner and pharmacist Robert Woolsey at Medi-Quik Pharmacy in Ozark phoned her to go in the first day she was eligible, she said. After she drove 13 miles to his store, she asked to get vaccinated in her car. Woolsey obliged.

Harrison, who worked in nursing before health problems struck, lost a sister and a brother in Arkansas to covid-19 in the past year. She wanted her shots as soon as possible.

"I'm concerned about my health and have heard about too many elderly people passing away from this virus," she said.

Arkansas began Dec. 14 distributing Pfizer-BioNTech and Moderna vaccines for two-dose shot regimens against the disease caused by the coronavirus.

The state has principally enlisted pharmacies -- including independent and small-chain operations and large chains like Walgreens and Walmart -- to handle the freezing-temperature vaccines, the waiting lists and appointments, and the shots distribution.

Among those eligible for inoculations now are health care workers, long-term-care residents, some first responders, people ages 70 and over, educators, child care workers and -- as of last week -- people ages 65 and older. Some other groups are expected to be eligible as soon as April.

Many among the eligible have received shots through their workplaces or long-term-care facilities where they live. Elderly people still at home are the main group scrambling to arrange their own shots.

Researchers and doctors say the vaccines offer the best chance to tame a global pandemic that in the past year has killed more than 511,000 Americans, including more than 5,400 in Arkansas, according to federal and state health agencies.

"The United States is racing against time to vaccinate a majority of our population, while also dealing with supply- and demand-related barriers that can jeopardize any phase of the vaccine rollout," according to Dr. Sema Sgaier, CEO of Surgo Ventures. The privately funded nonprofit based in Washington, D.C., studies health issues, including county-by-county covid-19 vaccine distribution.

Miller County has Arkansas' lowest percentage of vaccinated residents at 3.8%, but state health officials suspect that many residents in the Texarkana area drive across town to get vaccinated in Texas, and those numbers aren't reported precisely in Arkansas' county-by-county information.

Others with lower-than-average rates include Crittenden and St. Francis counties in eastern Arkansas, 8.8% and 9.8%, respectively, and Madison County in Northwest Arkansas, 9.1%.

With high poverty and minority group populations, east Arkansas has relatively fewer health care workers and elderly people who are eligible, Ator said. The state has held some mass vaccination events and is working through centers of faith and community groups to overcome any hesitancy to get the shots, he said.

More vaccine distributors are needed in Madison County, which had two pharmacies on the state's list as of Friday, he said.

Like Franklin County, two more of the state's smaller counties have some of the best percentages of populations receiving first doses: Clay, 18.5%, and Cleveland, 19.8%.

Some of Arkansas' largest counties, as might be expected, are linked to better-than-average percentages for distributing first doses of the covid-19 vaccine. Among them are Pulaski, 17.7%, Faulkner, 17.3% and Craighead, 18%. But other populous counties lag behind the state's 16.2% average: Benton, 10.8%, Washington, 13.3% and Sebastian, 11.5%.

It's notable that while the Department of Health's county-by-county percentages are tracked by health officials and others, they are not exact.

More than 1 in 10 of total vaccine doses administered in Arkansas, according to the latest Health Department report, list the county name as "missing."

The biggest limiting factor for putting more shots in arms is the amount of vaccine arriving from the federal government, according to state and local health officials.

Still, Ator is pleased at the recent trend: "Altogether in the last three weeks, the state has seen an increase of 106% in vaccine that has come in," he said. Arkansas now receives about 63,330 first doses per week. It expects another 9,100 regularly.

With a predictable supply, state and local providers can "know what vaccine is coming. It allows them to make plans into the future. It may be three weeks in the future, but we can make the appointment," he said.

Ator said he also "can now plan large [vaccination] events without disrupting that."

How many pharmacies and pharmacists are available to give the shots has an impact.

"As a general rule, in every county we like to provide at least two or three" pharmacies or other distributors of covid-19 vaccinations, Ator said.

Franklin County's Medi-Quick Pharmacy owner Woolsey says he's grateful to have four pharmacists working at his store and believes it's unusual to have that many in a small-town drugstore.

"I have done almost nothing but give vaccine," Woolsey said. "My other pharmacists have stepped up and allowed me to give vaccine 10 or 11 hours a day. That's not common at all." He estimates that his store has provided more than 2,000 vaccinations.

In Hempstead County, the state started its vaccination effort with just Express Rx in Hope giving most shots, according to the chain's director of clinical services, Eric Crumbaugh. Walmart came on board in the county about two weeks ago.

Crumbaugh says the Hope store at first received about 100 doses per week from the state. It's now up to 200. He estimates the pharmacy has given about 1,000 covid-19 inoculations. The store is partnering with a local high school and residents to offer a mass vaccination clinic Friday.

The logistics of carrying out large numbers of vaccinations inside a typical drugstore can be difficult, he said. "We can't have 100 people come in to our pharmacy in a few hours. We don't have the space to keep them socially distanced. ... We have to operate a pharmacy in a community where it's very much needed."

Ator said Friday that the Health Department has added another pharmacy to provide covid-19 shots in Hempstead County -- Super 1 Foods pharmacy in Hope. He also plans a mass vaccination event for the county.

"Each county has different challenges and when we see or learn of them, we work to better resource them. That is the case in Hempstead," Ator said. 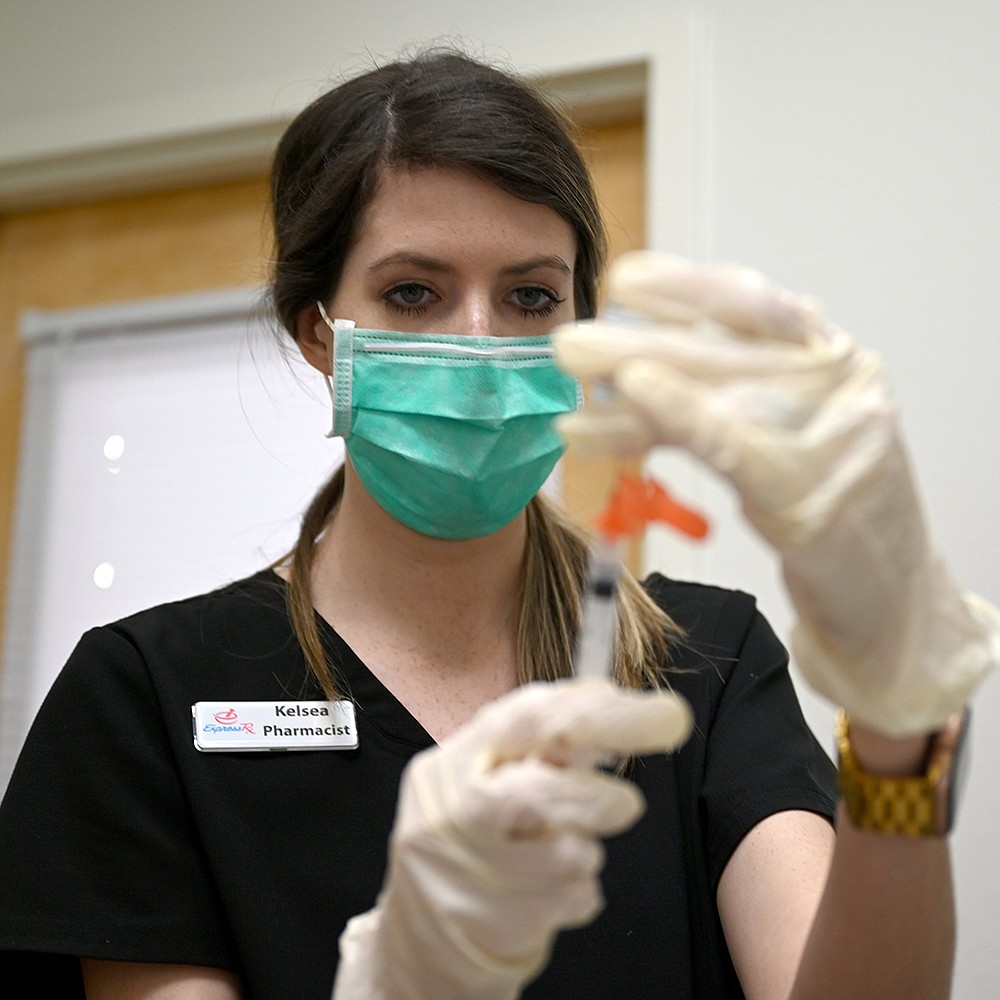 Kelsea Lee, a Pharmacist at Express RX Pharmacy in Hope, draws a dose of the COVID-19 vaccine to prepare for a patient on Friday, Feb. 26, 2021. Hope has one of the lowest percentages of initial doses of the COVID vaccine. See more photos at arkansasonline.com/228hope/..(Arkansas Democrat-Gazette/Stephen Swofford)
ADVERTISEMENT