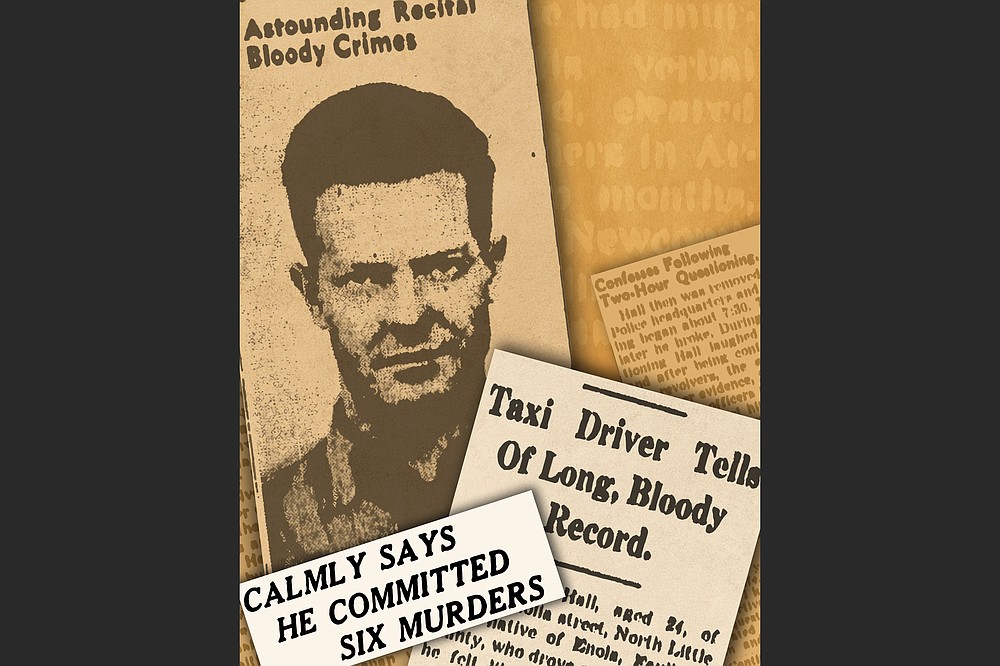 CONWAY — James “Red” Hall was a killer. On a humid night in September 1944, he beat his second wife, Fayrene Clemmons Hall, to death near the Riverside Golf Course in Little Rock and left her body by the Arkansas River.

After his arrest in March 1945, Hall, a part-time cab driver, confessed to a string of killings — perhaps 24 in all dating to 1938, including the unlucky motorists who made the fatal mistake of stopping for the friendly Hall as he thumbed for rides across Arkansas and the United States.

Jones first wrote about Hall in 2011, in a two-part article for AY magazine.

“My friend, Wanda McNinch, kept telling me about Red Hall,” Jones says. “He was the boogeyman. Parents would scare their kids and say, ‘Red Hall is gonna getcha!’ But when I looked online … there was nothing there about him at all.”

Jones, 69, tracked down Patterson Smith, a New Jersey collector of vintage detective magazines, articles and ephemera. Smith found five articles about Hall, and Jones used information from them in her original 2011 piece.

Around 2012, she was casting about for a book idea. Her husband, Wyatt, with whom she co-wrote “Arkansas Curiosities: Quirky Characters, Roadside Oddities & Other Offbeat Stuff” and “Hiking Arkansas,” suggested she write about Hall.

“Nobody had written about him before,” Jones says. “There was a comic book back in 1947, but aside from that, there was nothing about Red.”

Chad Rhoad is the senior acquisitions editor at The History Press.

“We love stories that make the history central to the story,” he says of “The Arkansas Hitchhike Killer.” “Not only is it a true-crime story, but it is one that makes the place such a big part of the story. It recaptures a poignant, and in this case tragic, moment in time.”

Jones went through old newspaper articles, including those written by legendary Arkansas Gazette police reporter Joe Wirges, who becomes an important secondary character in the story.

“Without Joe Wirges, I don’t think I would have had enough,” Jones says. “Joe was on the case, and he was with Red a lot.”

Indeed, Wirges accompanied police when they drove Hall to the locations of the hitchhike killings and was there when Hall took police to where he’d left Fayrene’s body. The reporter actually testified against Hall at trial and later interviewed him on death row.

Along with newspaper reports, Jones relies on transcripts from Hall’s trial and recollections of people who knew him.

“As time passes with these stories, legend and myth grow,” Rhoad says. “It’s good to have a story set in the historical record.” 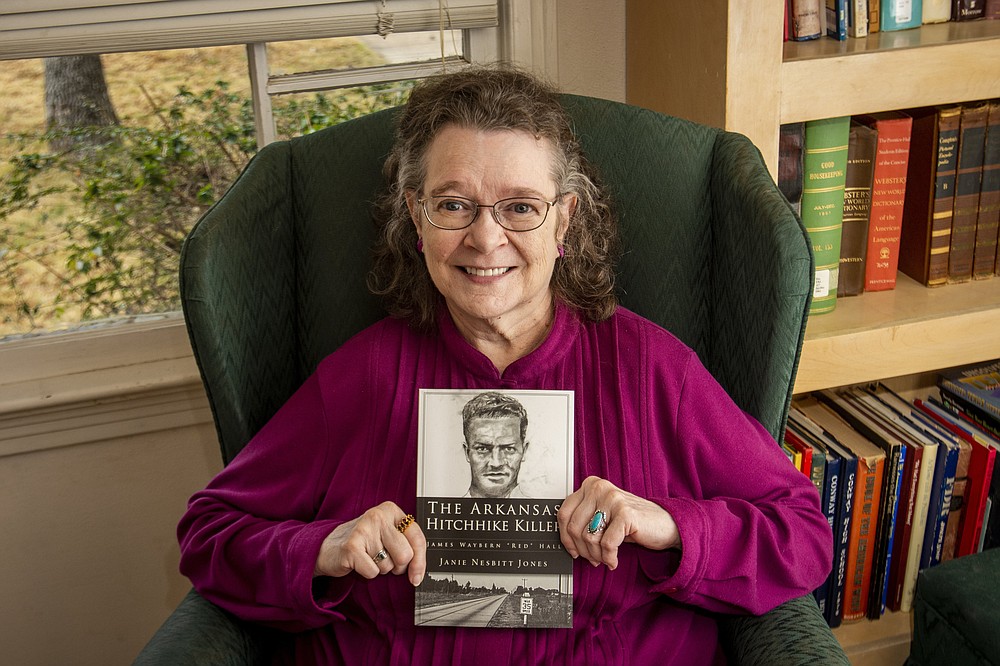 Jones chronicles Hall’s early years in Happy Valley near Enola. Hall, nicknamed “Red” for his shock of red hair, was a big, strapping boy who suffered the wrath of his father, Samuel Jerome Hall, a stern minister who did not believe in sparing the rod.

“He had a troubled childhood,” she says. “His father was verbally and physically abusive.”

Jones cites in her book a 2005 study, by psychologists Heather Mitchell and Michael G. Aamodt, that found that 36% of serial killers were mistreated physically as children and 50% suffered psychological abuse.

Hall was also narcissistic, another common thread he shares with many serial killers.

And then there was this.

“When he was about 12 years old, he had a severe head injury,” Jones says. “It affected him for weeks afterward. He wasn’t himself. I wonder how Red would have turned out had he not suffered that injury, because it was like he had no control. He would lose control. That sounds like someone who has had frontal lobe damage.”

At an early age, Hall would sneak off into the woods to escape his father and was soon wandering around the county. He was promoted from the eighth grade, but dropped out of school in 1937 before beginning ninth grade and was hitchhiking around the country, ending up in Detroit at one point and later, Kansas.

The next year, Jones says, was noteworthy for Hall. He met his first wife, Walcie, and according to him, he committed his first 11 murders.

The first person he killed, he told police, was a Black woman in Salina, Kansas. He also claimed to have killed 10 Mexican migrant workers at an Arizona farm where he worked.

“He said he would take them out, one at a time, and either hit them over the head or shoot them,” Jones says.

If Hall is to be believed, he was Arkansas’ deadliest killer, ahead of mass murderer Ronald Gene Simmons Jr., who killed 16 people, including 14 of his relatives, near Dover in late December 1987.

Jones theorizes that after killing Fayrene in 1944, Hall, who was not without his charms and was described by a former landlady as a “nice, clean boy,” went on a bloody rampage.

Among Hall’s suspected victims were Carl Hamilton, a Black barber and bootlegger who had been shot twice with a .45-caliber pistol and whose body was found slumped against a tree near Camden; E.C. Adams, a husband and father from Humboldt, Kan., who was on his way to start a new job at a naval ordnance plant in Camden; and 30-year-old Doyle Mulherin, a driver for Western Meat Co. in Little Rock, whose body was found a week after the Adams murder near the Bayou Meto Bridge outside Stuttgart. Adams and Mulher- in were killed with the same .38-caliber pistol.

Another suspected Hall victim was J.D. Newcomb Jr., chief boiler inspector for the state Labor Department, who was traveling to Clarksville from Little Rock. His charred body was found in his partially burned car in Cleburne County.

Evidence corroborated Hall’s confessions in the Arkansas cases, Jones writes, and she looks into his other claims — that, among others, he killed a doctor and a soldier in Kansas, a Texas Bible salesman, and an Oklahoma man, all in 1944; and another Oklahoma man in 1940 — in the chapter “One in a Long Line of Monsters.”

The killer, says Jones, was a puzzle.

“One thing that’s hard to understand about Red is, what did he get out of this? Robbing them? It was so little money. At most he probably made $126 in one robbery. Also, he made good money driving a cab. He gets no sexual pleasure from it. He’s different. He just killed them.” 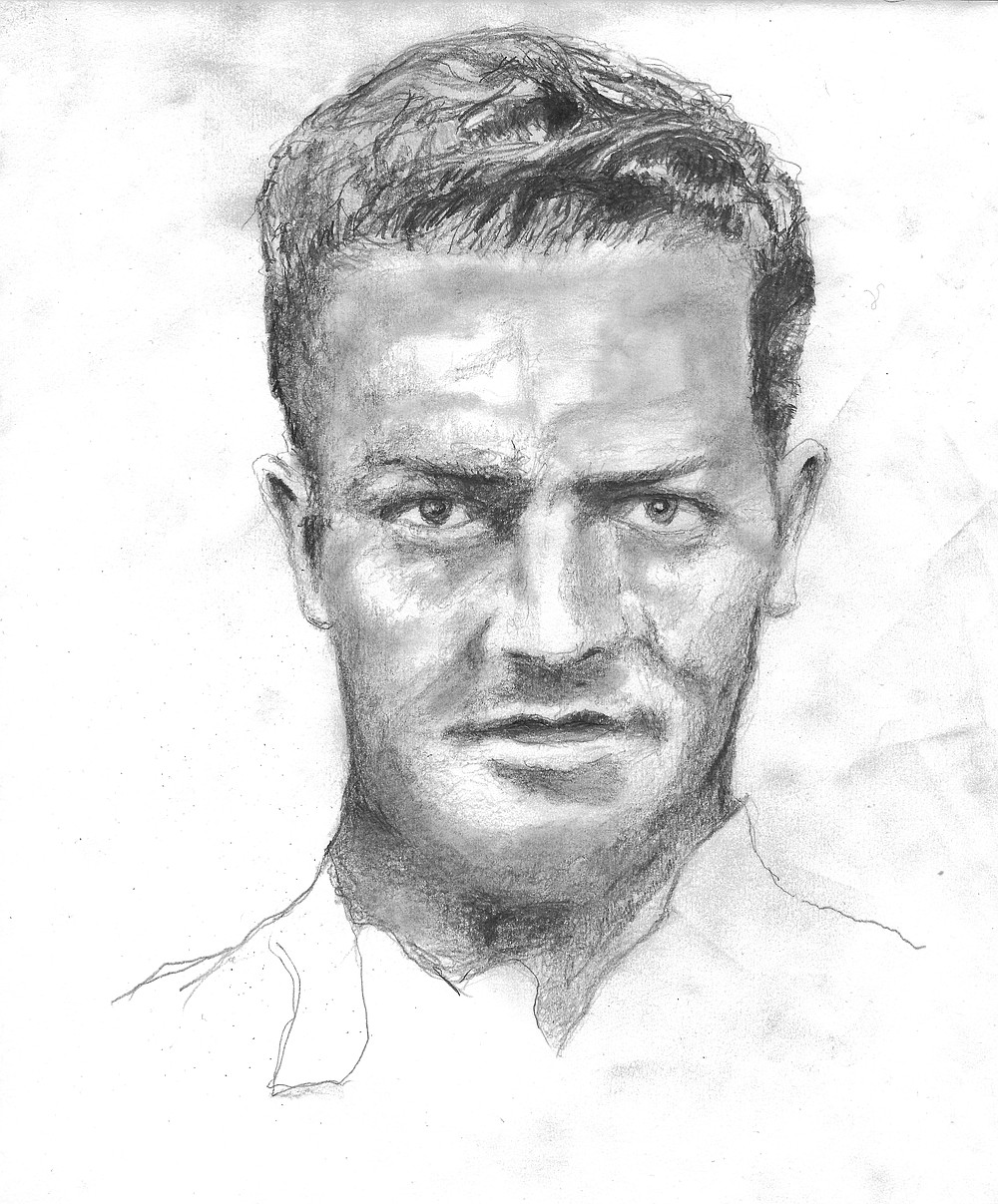 Jones was about 50 when she began writing features for the River Valley & Ozark Edition of the Democrat-Gazette.

In 2006, she wrote “Who Killed Chester Hooker,” about a 1997 murder at the Broadway Hotel in Prescott, for AY magazine. Since then she has written more than 80 true-crime articles for the magazine.

“It’s never too late” to start something new, Jones says. “I think of Burt Mustin, who was a great character actor. He was 67 years old when he started acting and kept at it until he was 90-something. I’ve toyed with the idea of writing a book about all these people who didn’t find their niche until they were 50 or older.”

Jones, who grew up in Conway, is cheerful and quick to smile, but admits with a chuckle that she may have been a “morbid little girl.” She traces her interest in true-crime stories to when she was 11, watching the “CBS Evening News with Walter Cronkite.”

“There was this grainy film footage of a body on a gurney being wheeled out of an apartment house. It was covered in a sheet and Walter Cronkite said that the Boston Strangler had struck again. That hooked me.”

She began reading things like “Cell 2455, Death Row: A Condemned Man’s Own Story,” by Caryl Chessman, the convicted robber, rapist and kidnapper who was executed in 1960. She also learned about Isidore Zimmerman, who served 25 years in prison for a 1937 murder he didn’t commit.

“Oddly enough, I find myself writing about people who did commit crimes, but I’m very aware of the people who have been imprisoned and even executed who were innocent.”

True-crime stories have grown in popularity, especially on streaming services, where documentary series like “Night Stalker,” “The Staircase” and “I’ll Be Gone in the Dark” can be binged, and on podcasts like “Serial.”

“True-crime is partly entertainment,” Jones says. “Women like to go at it from a psychological standpoint. They’re interested in what makes that guy tick, and I do like to present a little bit about the psychological aspects of it. But it’s entertaining and cathartic. It makes you feel, in a way, more alive.

“And then, too, you may learn something. Like, don’t get into the car with that guy.”