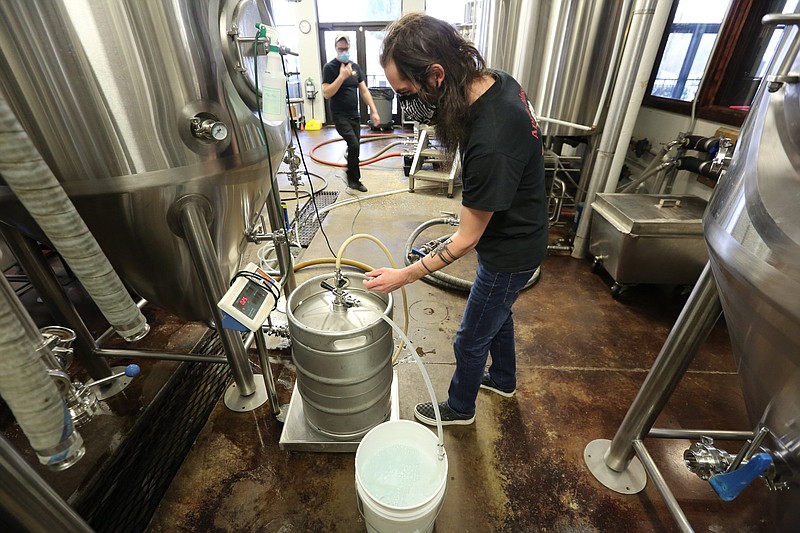 Chris Tritt, brewer at Apple Blossom Brewing Company, harvest Wednesday, February 24, 2021, yeast from a 10 barrel fermenter inside the brewing room at the brewery and restaurant in Fayetteville. Apple Blossom Brewing Company has reopened under new ownership. Check out nwaonline.com/210228Daily/ and nwadg.com/photos for a photo gallery..(NWA Democrat-Gazette/David Gottschalk)

The operation closed its doors in June after establishing itself in 2013 as one of Northwest Arkansas’ first brew pubs. In a video at the time, co-owner Evan McDonald said pressures from the covid-19 pandemic forced the brew pub’s closure and he thanked the Apple Blossom staff and encouraged folks to continue to do business with Arkansas craft-brewers and restaurants.

Tony Trammell, one of the new owners, said Apple Blossom will be the fourth restaurant his family has owned and operated, the most recent one being a seaside restaurant in St. Thomas, the Virgin Islands, which they sold at the end of January 2020. He said the family is from Texas but they decided to come to Northwest Arkansas when they saw the opportunity with Apple Blossom.

Trammell will run Apple Blossom alongside his wife, Christina, and his son Austin, who will act as the executive chef. Austin Trammel graduated from The Culinary Institute of America in Hyde Park, N.Y. Tony Trammel worked for more than five years with Anheuser-Busch Brewing Company where he worked closely with craft brewers.

Trammell said Apple Blossom, with its ability to seat 300 patrons (under normal, pre-covid-19 conditions) including an outside patio area, is the family’s largest restaurant to date. The brew house and restaurant total about 8,500 square feet. Trammell said Apple Blossom will serve a full menu and feature a full-bar complete with 18 beer taps with six featuring the brewery’s offerings and another six dedicated to other area craft brewers.

He said reopening the brew pub with the country still reeling from the covid-19 outbreak was risky.

“This is about as big an all-in gamble as there is,” Trammell said.

Apple Blossom has a 15 barrel brew house capable of producing about 100,000 gallons of beer a year, Trammell said. The operation currently offers five varieties of beer brewed in-house and expects to add a sixth soon. The brewery doesn’t offer growlers yet but does have take-out options on its food menu.

The brewery operation will be run by Brewmaster Alton Huebner, while former employees Chris Tritt and Brandon Evans have been rehired as part of the brew team.

Sylvia Blain, executive director of the Arkansas Brewers Guild, said the state’s brewers are adapting as best they can in the face of the covid-19 pandemic. She said Arkansas has 39 breweries in operation, which include 10 with restaurant combos and 3 more with brewery/ food truck or permanent kitchen contracts.

In Arkansas, beer-makers brewed 16% more in 2019 than in the year before, according to information provided by the Alcoholic Beverage Control Division of the Arkansas Department of Finance and Administration. Arkansas brewers produced 40,818 barrels of beer in 2019, up from 35,193 barrels in 2018. A barrel of beer contains 31 gallons.

According to data gathered by Bart Watson, chief economist for the Brewer’s Association, sales in 2021 at breweries are expected to be up about 7% when compared with 2020 but are expected to remain far below 2019. The industry isn’t expected to recover fully until 2022.

Watson said while the industry as a whole has been hit hard by covid-19, some of the impact to sales of beer at taprooms and to restaurants can be offset by increased retail demand, curbside pickup, and delivery options if breweries are in a position to capitalize on that demand.

He said because of this, brew-pubs that rely heavily on food service and on-site consumption, have been hard hit.

For operations like Apple Blossom, he said, knowing the challenges of covid-19 brings some advantages rather than having to adjust a business model on the fly.

“They’re entering the situation knowing what they’re going to have to deal with,” Watson said.