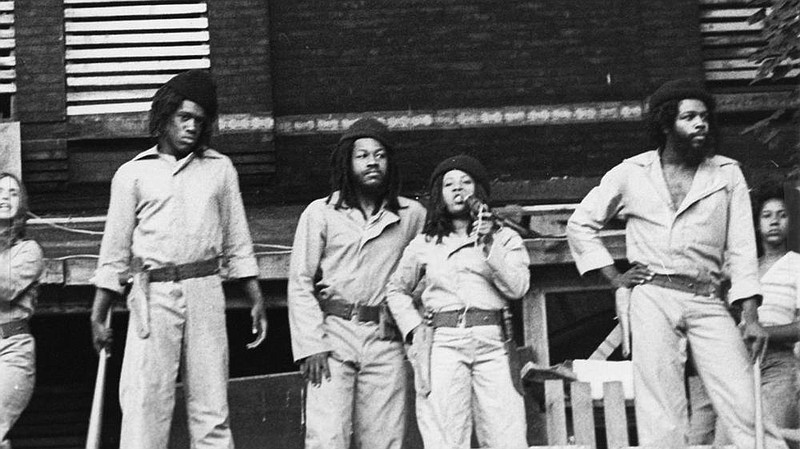 An archival photo of members of Philadelphia’s MOVE group, a communal “family” who all adopted the surname “Africa” and irritated the establishment in Philadelphia in the ’70s and ’80s.

Until the #BLM protests earlier this spring which finally led it to be painted over, up on a large, flat building wall just a couple of blocks from my apartment, in the heart of Philadelphia's Italian Market -- that famed Philly neighborhood in which a young, sweatsuited Rocky Balboa ran, cheered on by early-rising vendors, burning boxes in trash bins -- there was an enormous portrait of Frank Rizzo, the controversial former police commissioner and mayor of the city, during a(nother) tumultuous era in Philadelphia's racial history.

Rizzo, who famously once said he would "make Attila the Hun look like a [derogatory term for gay men]," was named Philly's Police Commissioner in 1967, and segued that into a mayorship four years later, serving until 1979, when he attempted to change the city's charter in order to run for a third term, but was denied.

A hero to a base of white, working-class denizens down in South Philly, and the notoriously conservative base up in the northeast section of the city, Rizzo was himself an unapologetic bigot, who encouraged citizens to "vote white" for one of his campaigns. A former cop, he was also deeply aligned with the police department, whose corruption and overt racism was encouraged by a commissioner and mayor who would stand behind the FOP under any circumstances.

To round out his resume, he was also a tremendously vain-glorious and thin-skinned bully, the type whose ego would never let them publicly lose face (stop me if this sounds at all familiar). Thus it was, when a ragtag cadre of mostly Black and Latinx young people banded together to form MOVE (not an acronym), under the curious teachings of a man named John Africa, who preached a return to a natural way of living, and respect for all forms of life, while denouncing the brutal, unjust methods of the government, and Philly's police department, they became squarely in the (literal) crosshairs of Rizzo, and the den of cops under his authority.

In August 1978, Rizzo had finally had enough and put an enormous blue army to bear -- including dozens of police, S.W.A.T. units, bulldozers, and municipal tanks -- in order to facilitate MOVE's forceful eviction. The result of this assault, which used tear gas, fire hoses, and, eventually, an enormous number of firearms, left one policeman, James Ramp, dead, several others injured, and nine MOVE members arrested, including one, Delbert Africa, publicly beaten on by a trio of cops, who kicked him into unconsciousness while caught on camera.

After a mess of a trial, with scant evidence (Rizzo had ordered the complete destruction and razing of the MOVE house later that same night), and the defendants screaming back and forth with the judge, the entire group was convicted of third-degree murder, the judge heaping on all of them the maximum penalty of 30-100 years in prison. As far as the City was concerned, the matter was closed. For the MOVE 9, as they had been dubbed, the rest of their lives were put on hold.

Tommy Oliver's documentary, '40 Years a Prisoner,' which follows the case and its aftermath, uses as a sort of through-line the singular plight of Michael Africa Jr., who was actually born to his mother, Debbie Sims Africa, while both of his parents were incarcerated in the wake of the verdict. As a grown man, he has spent almost the entirety of his life attempting to get his parents' freedom, either by challenging the results of the court case, or doing whatever possible to help them earn parole (an option denied every member of the MOVE 9 almost automatically for the better part of a decade). He's a vibrant, interesting cat, somehow still hopeful, after not spending time with his parents outside of their respective prisons for nearly four decades.

Through his charisma, and the vigilance of he and the MOVE legal team, the film earns a satisfyingly simple dramatic climax, but it feels as if it leaves far too much of the story on the table. As one example, the trio of officers initially arrested for the ruthless beating of Delbert, go through an almost comically unconscionable trial, in which the judge literally didn't allow the defense to make its closing argument, and instead disavowed the jury altogether, while declaring all three white cops not-guilty. While Oliver touches on the trial -- one of the more outrageous aspects of this entire hideous series of events -- he just as quickly drops it, and resumes the main storyline he has selected. Similarly, the faux investigation as to the cause of Officer Ramp's death, in which eyewitnesses claim that the bullet that killed him came from behind the wall of cops firing wildly into the basement, and subsequent possible cover-up, are only given scant attention.

Admittedly, the MOVE affair is a complex weave of politics, brutality, endemic racism, and outrage, but Oliver's film feels too much like the veritable visible part of the iceberg. Keep in mind, this entire bit of horror wasn't actually even the worst and most savage attack the City made against the organization -- a scant seven years after this bloody confrontation, Philadelphia's City leaders saw fit to drop an actual firebomb on another MOVE household, causing the death of 11 members, including John Africa, and five young children, along with the burning down of an entire city block in the process -- a further brutalization Oliver doesn't even touch on here. Buckle up for the sequel, because this terrible story still has a long way to go.