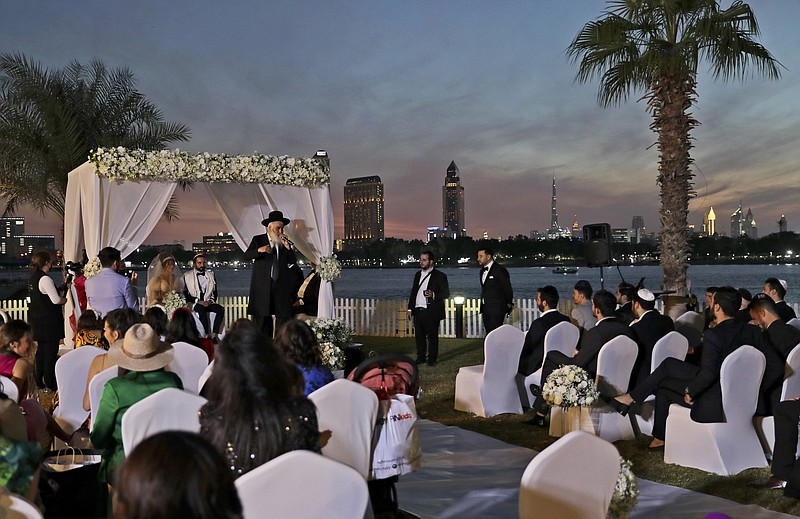 A rabbi officiates under a traditional Jewish wedding canopy during marriage ceremony of the Israeli couple Noemie Azerad, left sited under the canopy, and Simon David Benhamou, at a hotel in Dubai, United Arab Emirates, Thursday, Dec. 17, 2020. For the past month, Israelis long accustomed to traveling incognito, if at all, to Arab countries, have made themselves at home in the UAE’s commercial hub.(AP Photo/Kamran Jebreili)

DUBAI, United Arab Emirates -- Noemie Azerad and Simon David Benhamou didn't just throw a somewhat normal wedding bash in the middle of a pandemic that has shut down their country and ravaged the world. They were reveling in Dubai in the United Arab Emirates, which -- like most of the Arab world -- had been off-limits to Israeli passport holders for decades.

The pair was among tens of thousands of Israelis who had flocked to the UAE in December after the two countries normalized ties in a breakthrough U.S.-brokered deal.

The lure of Dubai, the UAE's skyscraper-studded commercial hub with sandy beaches and marbled malls, has already proved powerful. Scores of Israeli tourists, seeking revelry and relief from monthslong virus restrictions and undeterred by their government's warnings about possible Iranian attacks in the region, have celebrated weddings, bar mitzvahs and the eight-day Jewish festival of Hanukkah with large gatherings banned back home.

"I expected to feel really uncomfortable here," said 25-year-old Azerad, the Israeli bride, from the hotel ballroom, bathed in the glow of Dubai's glittering skyline. But all of her preferred wedding destinations announced tough restrictions on gatherings to check the spread of the virus. Dubai caps parties at 200.

Unwilling to delay the wedding, the choice was obvious.

"I feel like it's Tel Aviv," Azerad said of Dubai. "I hear Hebrew everywhere."

Her French father, Igal Azerad, said he always hides his skullcap in his pocket for fear of assault on the streets of Paris. But in Dubai, the sight of his kippah prompts "Emiratis to come up and tell me 'Shalom,'" he said.

Despite the countries' long-secret ties, the UAE had considered Israel a political pariah over the decades-old Israeli-Palestinian conflict. The modest expat Jewish community in the federation of seven sheikhdoms kept a low profile and prayed in an unmarked villa.

But the arrival of 70,000 Israeli tourists, according to travel agents' estimates, on 15 nonstop daily flights in December changed everything. A 12-foot Hanukkah candelabra appeared under the Burj Khalifa, the world's tallest tower.

The Jewish community's furtive Friday night Shabbat meal has transformed into celebrations at two cavernous banquet halls with spillover seating for Israeli visitors. "Made in Israel" signs have popped up in Dubai's chain grocery and liquor stores, which now sell wine from the Israeli-annexed Golan Heights. Wine, honey and tahini from Israeli settlements in the occupied West Bank will hit the shelves in the coming weeks and be labeled products of Israel, according to a Dubai commodities company.

On social media, a trip to the UAE has become a status symbol for Israelis who display photos of themselves in Dubai. A dozen hotels across the city say they've booked thousands of Israeli travelers and hosted a range of Israeli business conferences, holiday parties and days-long weddings. Israeli singers have planned concerts for spring. Kosher catering companies from the United Kingdom and elsewhere have set up shop in the UAE. Plans are underway to break ground on the country's first Jewish cemetery and ritual bath known as a mikvah, according to Rabbi Mendel Duchman, who helps run the country's Jewish Community Center.

For weeks in December, the only other countries where Israelis could land without a 14-day home quarantine upon return were Rwanda and the Seychelles. Dubai has remained open for business and tourism, with few restrictions beyond social distancing indoors and masks outside. Guests at weddings and other gatherings often do not wear masks.

Even as Israelis gush about the warm embrace of their hosts, very little has been heard about the UAE's 180-degree shift from its 1 million citizens, who are granted free housing, education and health care and tend to seclude themselves from their country's vast expatriate population. The sheikhdom's hereditary rulers suppress dissent. Even dramatic political decisions are met with acquiescence.

Ahmed al-Mansoori, a museum director who has welcomed dozens of Israeli visitors to his collection of ancient maps and manuscripts, including a fourth-century Torah scroll, acknowledged "some cultural misunderstandings among populations that haven't really dealt with each other before."

"Each Emirati has their own psychology about this," he said when asked about the policy reversal that Palestinians view as a betrayal of their quest for a state on lands occupied by Israel.

But he noted that Dubai, a city powered by millions of workers from Africa, Asia and the Middle East, easily absorbs waves of expats, including from countries locked in bitter struggles with one another. 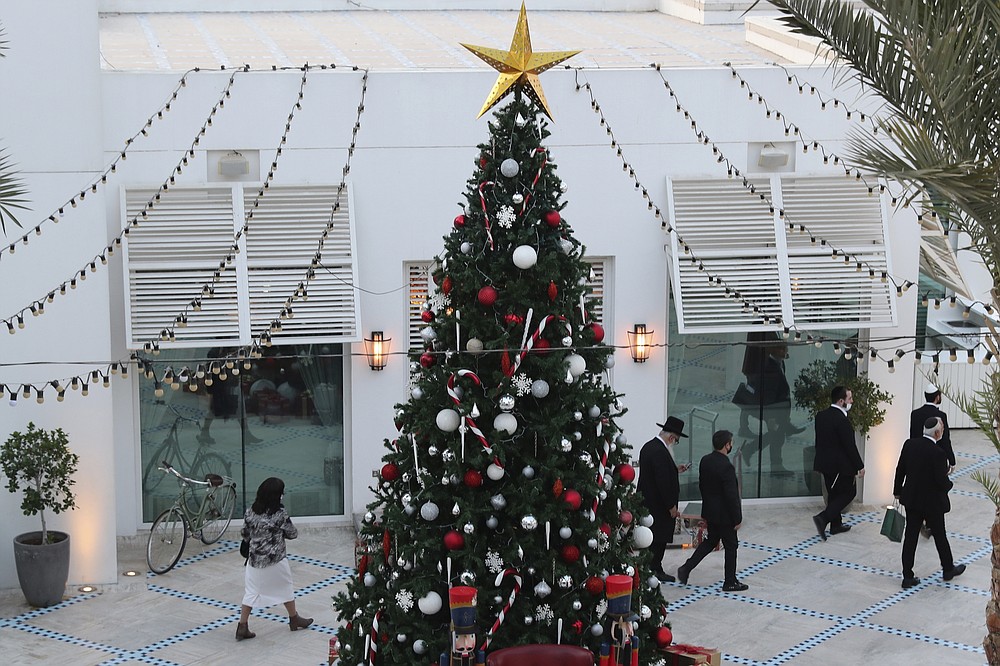 A rabbi and other guests pass a Christmas tree to take part in an Israeli wedding ceremoney in Dubai, United Arab Emirates, Thursday, Dec. 17, 2020. For the past month, Israelis long accustomed to traveling incognito, if at all, to Arab countries, have made themselves at home in the UAE’s commercial hub. (AP Photo/Kamran Jebreili) 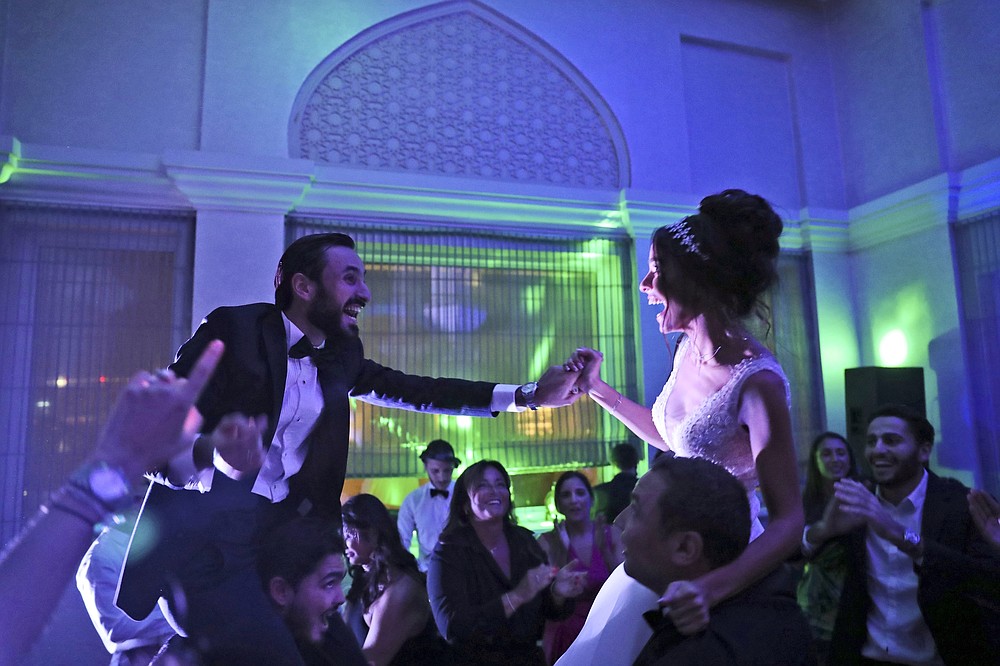 Israeli couple Noemie Azerad, right, and her husband Simon David Benhamou grasp each others hands on the shoulders of skullcap-wearing groomsmen during their wedding party at a hotel in Dubai, United Arab Emirates, Thursday, Dec. 17, 2020. For the past month, Israelis long accustomed to traveling incognito, if at all, to Arab countries, have made themselves at home in the UAE’s commercial hub.(AP Photo/Kamran Jebreili) 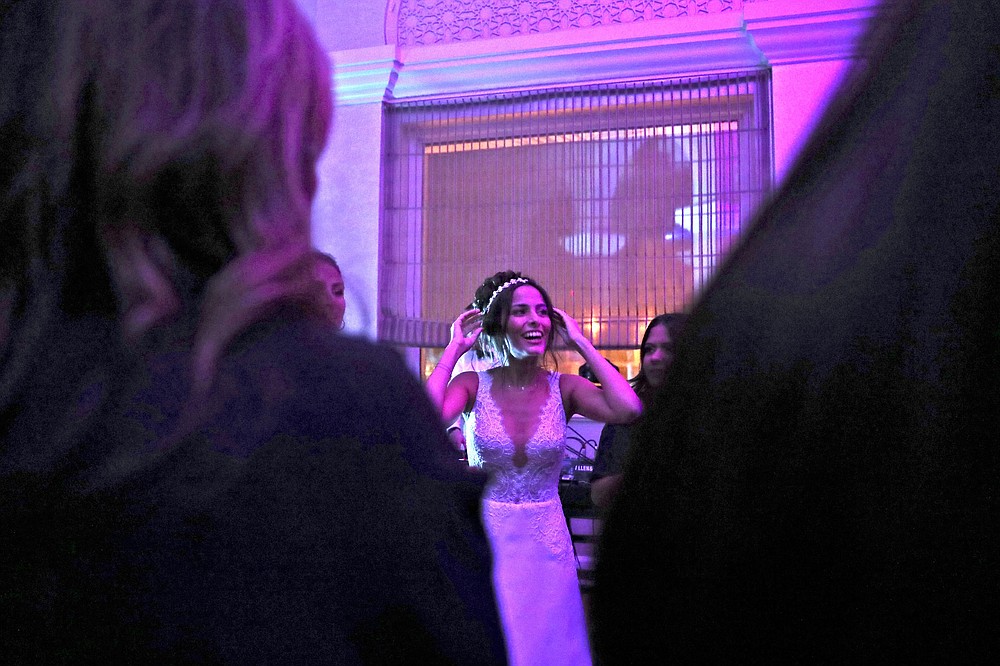 Israeli bride Noemie Azerad, reacts in her wedding party at a hotel in Dubai, United Arab Emirates, Thursday, Dec. 17, 2020. For the past month, Israelis long accustomed to traveling incognito, if at all, to Arab countries, have made themselves at home in the UAE’s commercial hub. (AP Photo/Kamran Jebreili)
ADVERTISEMENT