Building joy: Everyone gather round the squirrel table — chipmunks too 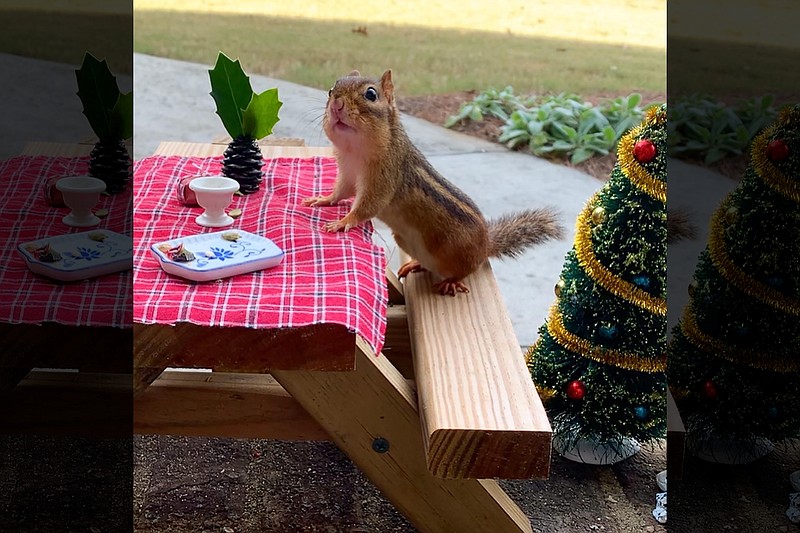 A photo provided by Angela Hansberger shows a chipmunk at a small table with holiday decorations. Enticing wildlife to the backyard, with tiny furniture and elaborate meals, has consoled some Americans in quarantine. (Angela Hansberger via The New York Times)

Thelonious Munk sits down for an alfresco meal at a wooden table. He eagerly picks up a taco prepared with a walnut flour tortilla, which he sniffs before taking a few nibbles. He lingers for a bit after his meal before leaving. He scampers into a bush and through a tunnel — because he isn't checking out the latest vegan restaurant, but is instead a wild chipmunk.

He lives in writer Angela Hansberger's yard outside Atlanta where, like many backyard critters around the country, he has been eating like a king at a squirrel table every day since April.

Squirrel tables have emerged as one of the quirkiest trends of the pandemic. Resembling miniature picnic tables, they're typically made from cedar or pine, and measure about 8 by 5 inches. People affix them to fences or trees, or sometimes arrange them on the ground. Although called "squirrel tables," people lay out a selection of nuts and seeds for any backyard creature, be it squirrel, chipmunk or groundhog.

The trend seems to have started in March, when Rick Kalinowski, an unemployed plumber in Bryn Mawr, Pa. posted a series of pictures of a squirrel feeder in the Facebook group "All About Squirrels." In one widely shared picture, a squirrel sits at the table attached to a fence and grasps peanuts with its little hands.

The sight of the animal doing something so humanlike and peculiar captured the hearts of thousands. People who suddenly had more time on their hands were delighted with the prospect of having their own squirrel tables. There are hundreds for sale on Etsy, priced from $20 to $85.

Among the squirrel table enthusiasts is Steph Moore, 40, a self-described maker in Walton, Ky. She and her three children had become fascinated with the squirrels that run along their fence. Inspired by videos online, she made a table using a laser cutter and attached it to a tree. 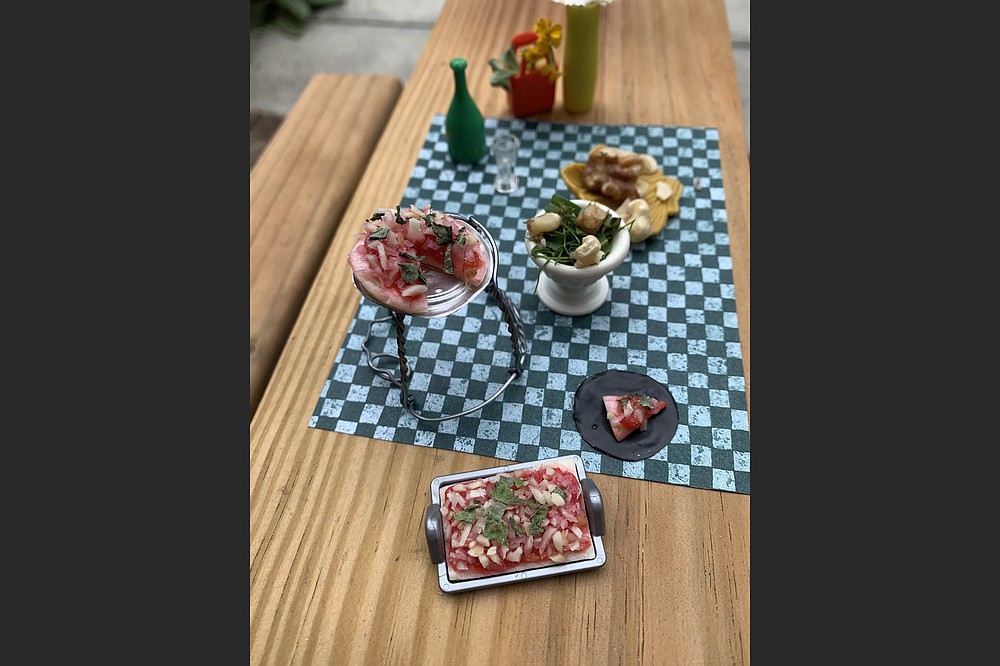 Now, the family leaves snacks for the two squirrels that visit most often. "They're very picky. They know they're getting food, but they really only like it when we put out the good nuts," she said, namely walnuts.

This new hobby has surprised Moore. "I don't find them cute ... at least I didn't," she said, "I grew up terrified of rodents, and now I find these adorable."

Squirrels were once nearly eradicated from cities because they were thought of as crop pests or game, Etienne Benson, an associate professor in history and the sociology of science at the University of Pennsylvania, wrote in a 2013 paper published in the Journal of American History.

But in the mid-1800s, cities like Philadelphia and Boston began reintroducing squirrels to public squares to "beautify and enliven the urban landscape at a time when American cities were growing in geographic extent, population density, and cultural diversity," he wrote. 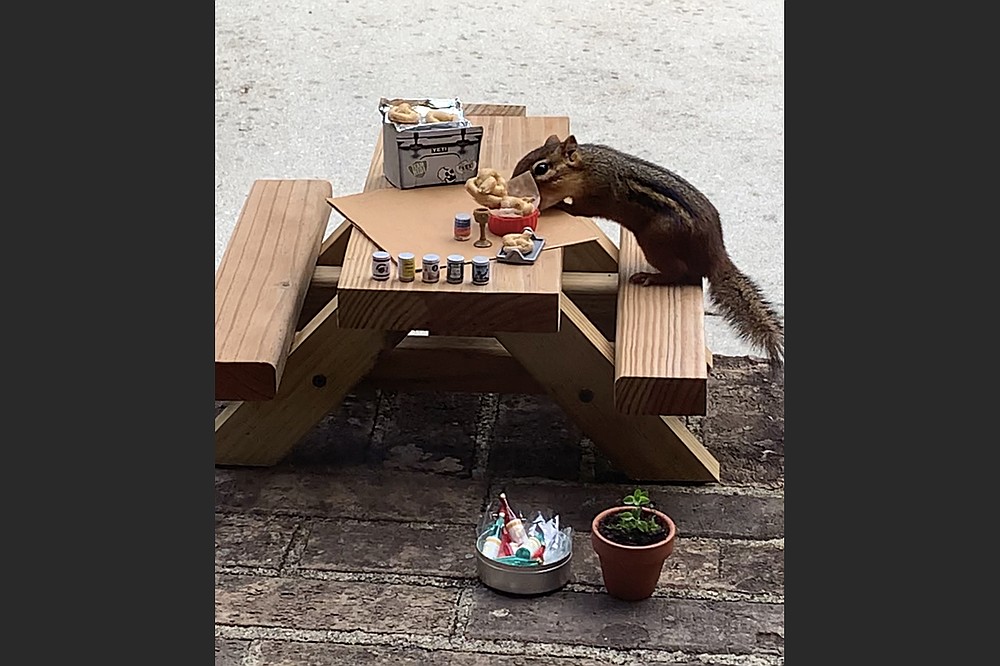 It wasn't until Frederick Law Olmsted designed urban parks with trees that squirrels successfully found homes in such cities and eventually in suburbs. Because they are fairly clean and perceived as cute, they appealed to naturalists who felt that they "contributed to a bucolic atmosphere," Benson wrote.

These days, squirrels are now part of the landscape, mostly going unnoticed as they scamper through their day. They tend to avoid the "vermin" moniker as long as they stay out of people's attics.

And since the pandemic confined people to their homes and backyards, squirrels' status has gone up. Hansberger, 50, is a food and spirits writer who spent most of her days around town before the shutdown in mid-March. While she lives with her husband and two sons, the initial days of quarantine were especially isolating. "I don't do the regular things anymore. I'm here every day in my house all day, except to do a grocery run or something like that," Hansberger said. "I got to a pretty dark, pretty sad place." 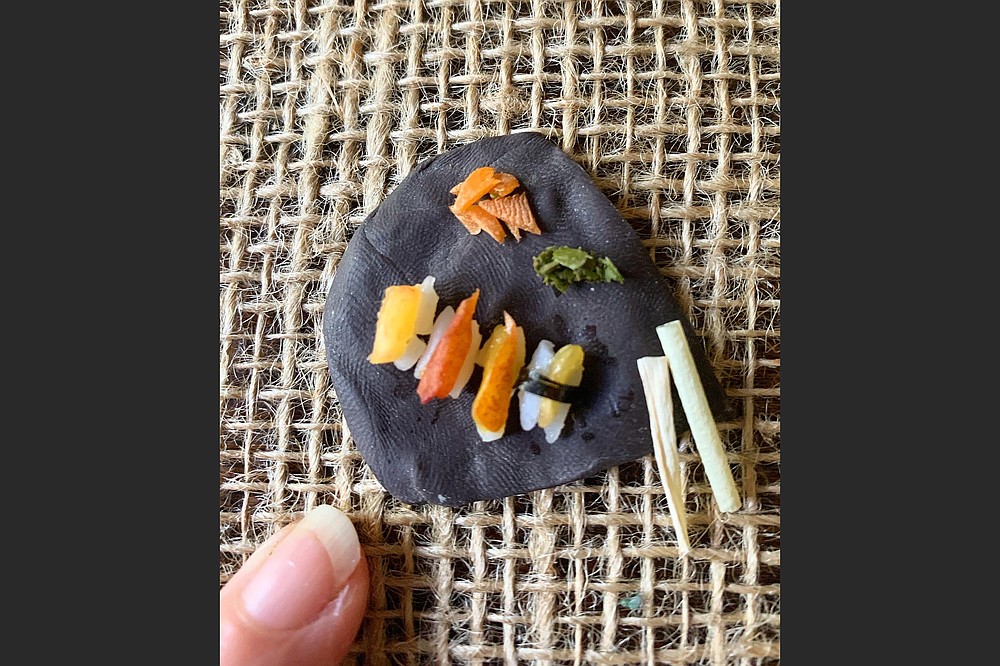 That changed when a squirrel table, the gift of a handy uncle, arrived at her home in April. She placed it on a step in her yard and a chipmunk was immediately drawn to it. She started feeding him. ("He'll do anything for a hazelnut.") Before long Thelonious Munk, as she called him, became as much of a fixture in the yard as the table itself.

She researched what chipmunks can and can't eat, and began preparing tiny meals for him. Photos of Thelonious dining amid ever-changing décor have replaced the ones Hansberger used to post of restaurants on her Instagram feed. Thelonious now has his own Instagram feed @thelonious_munk.

One day there might be a box on the table filled with chipmunk-safe "doughnuts" next to a miniature coffee cup. Another day, Thelonious might sit at a ramen bar made out of Popsicle sticks by Hansberger's husband and slurp down a bowl of mushroom broth made in Hansberger's kitchen.

No detail is spared: The bar is even topped with spirits-filled scrapbooking bottles and the bar stools are covered in scrap leather. "I lost a great deal of work when covid hit, and the tinkering and making of the food is kind of meditative to me because of that quiet process of doing something small," Hansberger said. 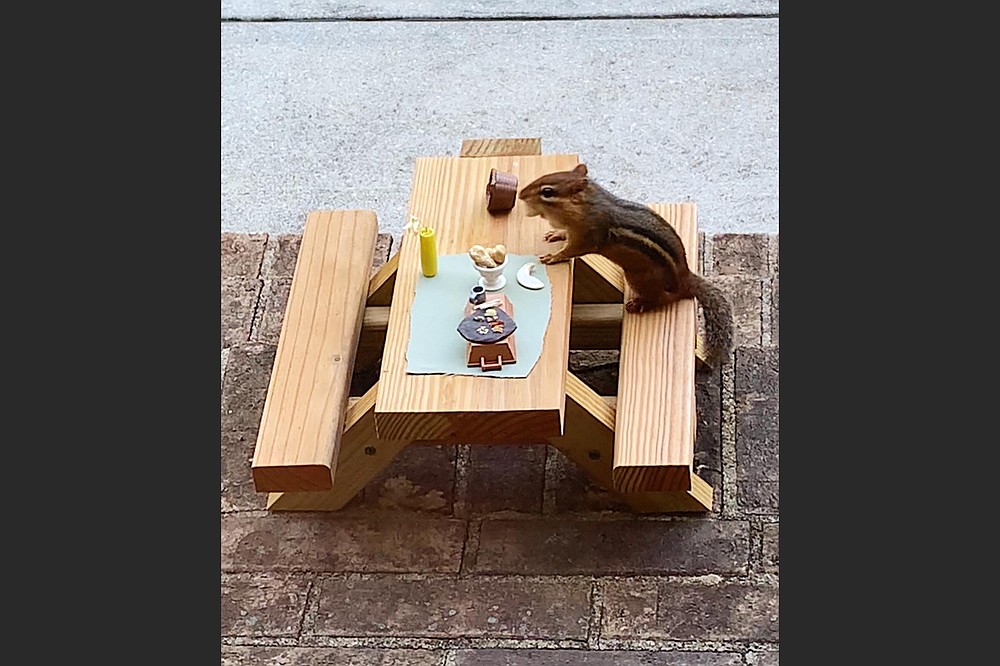 One viral tweet from her son later, the two began building a squirrel table business whose success baffles her.

"It's just funny to me to see a squirrel sitting at a picnic table, eating," Trezza said. "And I think people were locked in the house, nothing to do, and it just kind of made them laugh."

At a time of human social isolation, it also has helped that most of her customers drive from all over to pick up their tables from her patio and stay to chat. "It makes me happy to see these people excited," Trezza said.

Other table makers are more invested in the craft. Justin LaRose, 41, in Long Beach, Calif., is a skateboarder and furniture maker who puts particular thought into his squirrel tables.

"I really wanted to put realistic details into it that was like, if you blew it up, it would be a table," LaRose said. "It wasn't hard to make, especially because I was laughing the whole time." The result is a table that is striking despite its size, with multicolored streaks from several repurposed maple wood skateboards.

Some enthusiasts are venturing out of their yards and into nature. Christopher Svee, 38, who works in hospitality, and his girlfriend, Jena Garfield, 33, place rainbow-hued tables that pop against the greenery in parks around St. Paul, Minn., hoping to make squirrels and people happy. 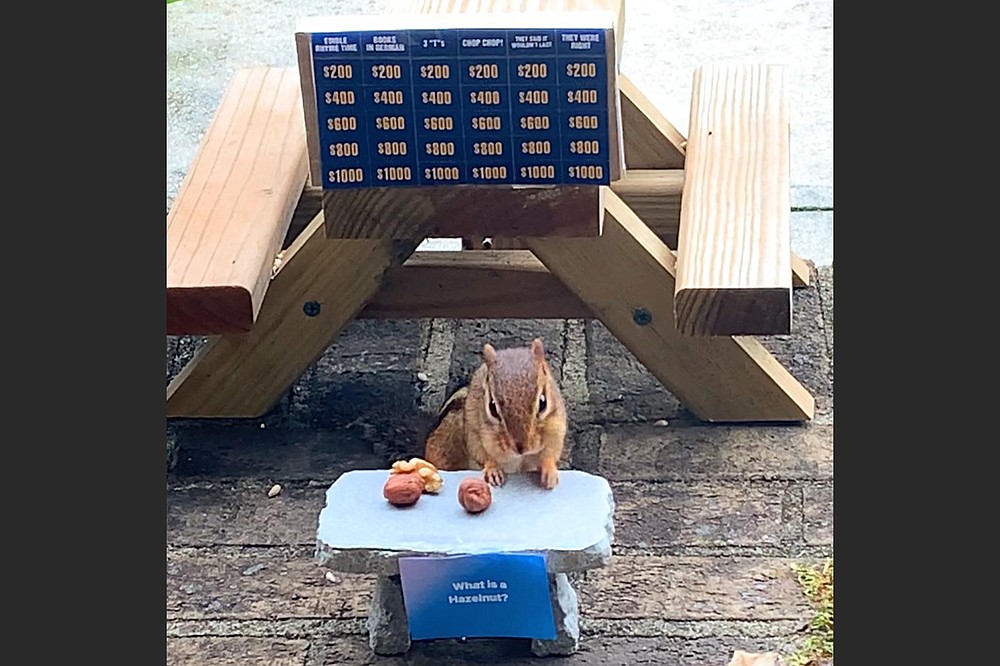 Angela Hansberger says the chipmunk she feeds would do anything for a hazelnut. She created a Jeopardy-inspired scene featuring his favorite nut. (Photo courtesy Angela Hansberger)

'A RANDOM ACT OF ART'

"It's kind of our spin on random acts of kindness, like a random act of art," Garfield said. "It's just something that is out in a public area, and it kind of brings joy to people during this crazy time that we're all in." After driving to replenish the squirrel feeders, she'll often find that someone else has already refilled them. "It's like a social experiment in a way."

Alas, it can have unintended consequences. Feeding wild animals can cause the spread of disease among them and lead to species infighting, according to Alison Hermance, the director of communications for the animal rescue nonprofit WildCare.

"Anytime you have a food source out, you put out a buffet and you can't really decide who comes," she said. "So you often have issues with people having bird feeders out and suddenly having rats showing up in the yard, because the seed falls to the ground." Hermance said proper cleaning of the tables and picking up fallen food can prevent such problems.

And for Hansberger, the solace found making Thelonious an almond flour pizza with crushed raspberry sauce is worth the risk.

"I get these messages every day from strangers that tell me all the things they've been going through all these months," she said. "Watching this little chipmunk makes them smile or brings them some comfort, or something to look forward to. That's enough."