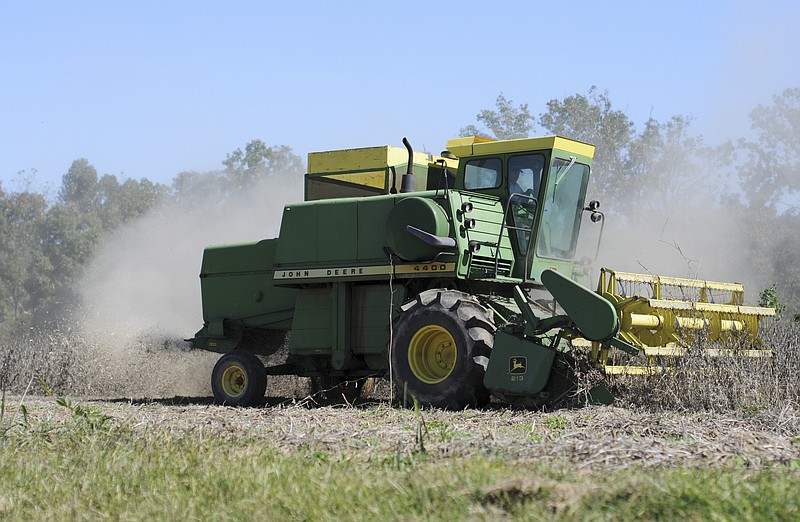 If there's one thing Arkansas soybean growers can say when no one else can, it might be this: 2020 was a pretty good year.

Despite an overly wet spring, delayed planting, and a slow-rolling harvest, the crop saw subtle increases in both acreage and average yield, bringing the state's total production up from about 127.9 million bushels in 2019 to about 139 million in 2020.

Jeremy Ross, extension soybean agronomist for the University of Arkansas System Division of Agriculture, said that as early as December 2019, soybeans appeared to be on a strong track for 2020.

"From the early conversations with soybean producers last winter, I had no doubt that the planted soybean acreage would increase compared to the 2019 planted acreage," Ross said.

While he was hoping growers would put the crop's planted acreage above 3 million acres in Arkansas, suppressed market prices kept the state's acreage to about 2.8 million acres.

"Since the first of the year, the soybean price has increased throughout the season, and the current market price is a $1 more than early in the year," Ross said. "If you looked at production budgets last winter, one or two other commodities looked more profitable than soybean. If some producers had known that soybean prices would increase by a dollar, we would have had more soybean planted this past spring."

The late winter and spring months were suffused with heavy rainfall, of course -- but soybean planting efforts have faced those sorts of conditions for several years running.

"Just like the past few years, the weather played some havoc with the 2020 planting progress," Ross said. "Planting progress was slightly behind the five-year average for most of the planting window, but much improved over 2019."

Further contributing factors to a healthy price bounce for soybeans included increased buying from China, coinciding with a reduced overall U.S. soybean supply stemming from a derecho storm event in August. The storm caused more than $7.5 billion in damage along a path from Iowa to Indiana, destroying millions of acres of corn and soybeans in the process.

Ultimately, weather conditions -- especially the multiple storm systems that passed through the Gulf of Mexico and into the Mid-South region throughout the summer months -- had the strongest impact on Arkansas soybeans of any external factor.

"Despite some rainy periods during the early season, the state experienced rather mild conditions during the first few months of the season," Ross said.

Growers did experience some hot, dry conditions during the summer months as well, with some growers reporting the effects of drought stress on their crops. Ross said some growers also reported scattered lodging in the wake of some of the larger weather systems, including Tropical Storm Laura.

"Some producers were disappointed with their final yields, and I think these late season weather events contributed to those lower-than-expected yields," he said.

"I didn't have many calls about failed plant stands like I did in 2019," he said.

In the end, the markets rewarded soybean growers, rallying increases from $1-$1.50 a bushel after harvest.

Ross said he hopes to see Arkansas soybean growers plant upwards of 3 million acres in 2021, a turn of events that higher commodity prices may support.

"Now is the time when producers need to be making variety selections, and develop a game plan for their herbicide program," he said. "Producers now have six different herbicide packages and conventional soybean varieties to look at for selecting varieties for next year.

"The best advice I have is to study as much information about available varieties producers can find and select a herbicide platform that will effectively control what weed issues you have in your fields," he said.

The University of Arkansas System Division of Agriculture offers all its Extension and Research programs to all eligible persons without discrimination.