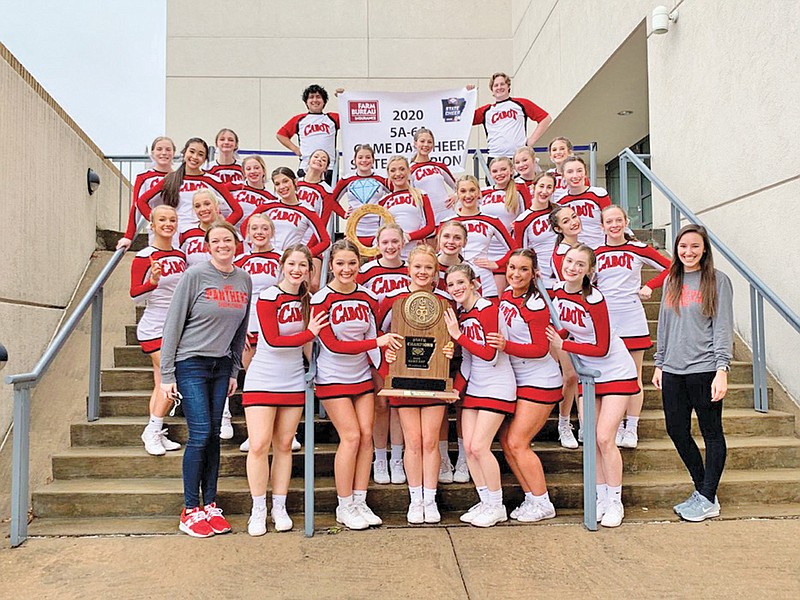 CABOT — Prior to this season, members of the Cabot Cheer squad made a plan to win the state championship.

“From the very beginning, all of us seniors set the goal that we were going to win,” said Marissa Brown, one of the senior captains for the team. “There was no other option. We wanted to win the whole season.”

On Dec. 19, Cabot won its first 5A-6A Game Day state championship at the Hot Springs Convention Center. This is only the third year for the Cabot Cheer squad to compete, finishing fourth two years ago and fifth place a year ago.

“It has been a long road, and we have practiced nonstop,” said Ashley Cooper, one of the coaches for the squad. “To win a state championship is pretty surreal. I’m not sure we have woken up from it.”

Cooper and Kristen Sumler have been coaching together for three years. They said there were 11 teams competing, with three different sections, including a cheer, a fight song and a band chant. Cooper said the judges’ scores are totaled from each section, and the top three teams then compete in the final performance. Alma High School finished as runner-up.

“On behalf of our athletic department, I want to say, ‘Congratulations to the athletes, coaches and to Cabot Cheer!’”

Cabot Cheer has nine seniors, eight of whom have been in the program since they were sophomores. Sumler said the seniors were determined to win state before they graduated and “truly bought into our program.” Those seniors include Brown, KoryLynn Jennings, Ava Schulz, Macey Jasmin, Riley Campbell, Katie Cason, Heidi Mathews, Hewitt Helton and Elizabeth Kreimeyer.

“Everyone was on board,” Sumler said. “The parents jumped in headfirst, and even the community support has been outstanding. We have put in a lot of hours.”

Helton, who also plays football for the Panthers, was the only senior who was new to the program. He had previously attended the team’s competitions because his girlfriend was one of the captains, and the coaches said Helton had worked as the squad’s mascot in years past.

“It made a big difference to have a strong person helping us,” Cooper said.

Brown said she couldn’t imagine ending her senior season any other way than winning the state championship.

“Since I was 4 or 5 years old, I’ve always wanted to be a cheerleader,” said Brown, who plans to try out for the cheer team at Arkansas State University in Jonesboro. “It has always been my escape — I love going to the gym. It is my second home.

“I don’t think I could be a person without cheer.”

“I coached the team a couple of years before Kristen came into it,” Cooper said, “but [once she came on board], that’s when it started being fun, and things started working well for us. … I don’t think it would feel the same to win it anywhere else.”

“We are so proud of our state-champion cheer team,” said Tony Thurman, superintendent for the Cabot Public Schools. “Not only are they the best performance squad in the state; they represent our school and community in an exemplary way in everything they do.

“Congratulations to the student-athletes and coaching staff for this outstanding accomplishment.”

Jennings, another of the senior captains, said that to finally earn the trophy and the state rings means everything to her.

“Honestly, we have worked so hard that it goes beyond those things. It meant we worked hard as a team to achieve something together,” Jennings said. “Honestly, it was such a surreal moment; I don’t think anything was going through my head [when we won].

“I had happy tears. The first thing I thought of was how proud of the team I was. I instantly started hugging people and crying. It is definitely a memory that I will remember for the rest of my life.”

Cooper said the team was really motivated to stay healthy and make it to the finals, and by the time of the state competition, all 27 kids were performing. She said not all of the teams could say the same thing.

“It’s not like football; we can’t sub somebody in or replace anybody. Everyone has an important role to play,” Jennings said. “We stayed 6 feet away in classrooms so that if anyone tested positive [for COVID-19], we couldn’t be quarantined.

“As it got closer to the competition, we all went virtual to avoid the risk. We had all worked hard, and we didn’t want to take the state experience away from anyone. Somebody missing was not an option for us.”

Jennings’ title-winning weekend was capped off with another milestone moment, as right after the win, she was recruited to cheer at Southern Arkansas University in Magnolia. She said that even though she had been talking to SAU representatives for a while, it was at the competition that she was told she wouldn’t have to try out and would be a part of the team once she enrolls at SAU next fall.

“Cabot has been such an amazing experience. I loved doing it so much,” she said. “Cheer helps you have a family — not just a team, but a sense of community.

“I would not be the person I am today without it.”

Schulz, also a senior captain, has been on the team for about five years.

“Everybody wanted a ring for so long, especially us seniors,” Schulz said. “We really changed this year. What we focused on in years past was getting our motions and placements right, which caused us to stress too much.

“This year was already stressful as it was, with everything going on, so we said, ‘There is nothing we can do about that, but we can change our attitude and have as much fun as we can.’

“[When we won], I remember jumping around. It was such a great moment. I was so ecstatic and thrilled.”