For UAPB hoops, 2 games are layups 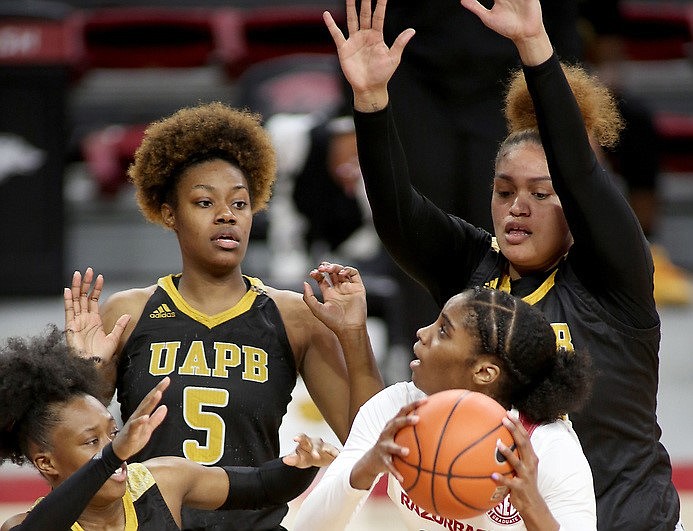 Both the men's and women's UAPB basketball teams won convincingly on Saturday against Mississippi Valley State in each team's first SWAC conference game.

The Golden Lions team was dominant in routing Mississippi Valley 92-52 in a home game played at the H.O. Clemmons Arena.

UAPB's defense held Mississippi Valley State to only 23.8% shooting from beyond the arc and 29.5% from the field.

After jumping out to a 15-10 advantage, UAPB went on a 12-0 run with 12:47 left in the first half, culminating in a bucket from Morris, to increase its lead to 27-10. The Golden Lions then added six points to that lead by the end of the period and entered halftime with a 49-26 advantage.

After intermission, UAPB kept widening that lead, expanding it to 72-47 before going on a 14-0 run, finished off by Alvin Stredic Jr.'s jumper, to grow the lead to 86-47 with 5:51 to go in the contest. The Golden Lions kept expanding the margin and coasted the rest of the way.

The Golden Lions return to action next Saturday in a 5 p.m. game against Alabama State. Limited seating is available at uapblionsroar.com/tickets.

The University of Arkansas at Pine Bluff women's basketball team jumped out to a 29-16 first-quarter lead and did not trail from there on the way to an 85-70 victory over the Mississippi Valley State Delta Devilettes at home Saturday.

The Lady Lions (2-5, 1-0 SWAC) had four players score in double figures, led by Joyce Kennerson, who had a season-high 21 points, eight assists and two steals. Trasity Totten added 17 points, including a career-high five made three-pointers, and two steals. Maya Peat posted her first career double-double off the bench with 12 points and 11 rebounds, and Khadijah Brown had her third career double-double with 11 points and 12 rebounds.

The UAPB defense held Mississippi Valley State shooters to only 35.8% from the field. The Lady Lions also kept Zakiya Mahoney to 3-of-15 shooting in the game.

After taking a 4-2 advantage to start the game, UAPB went on an 8-0 run with 7:33 left in the first quarter, culminating in a three from Totten, to increase its lead to 12-2. The Lady Lions then added three points to that lead by the end of the period and entered the quarter break with a 29-16 advantage.

UAPB went on an 11-0 run starting at the 7:06 mark in the second period, highlighted by a bucket from Ashlynn Green, to increase its lead to 42-20. The Lady Lions proceeded to tack on one point to that lead and enjoyed a 56-33 advantage heading into halftime.

After intermission, UAPB held on to its advantage and owned a 72-49 lead heading into the fourth quarter.

The Lady Lions return to action next Saturday in a 2 p.m. game hosting Alabama State in the H.O. Clemmons Arena. Limited seating is available at uapblionsroar.com/tickets.