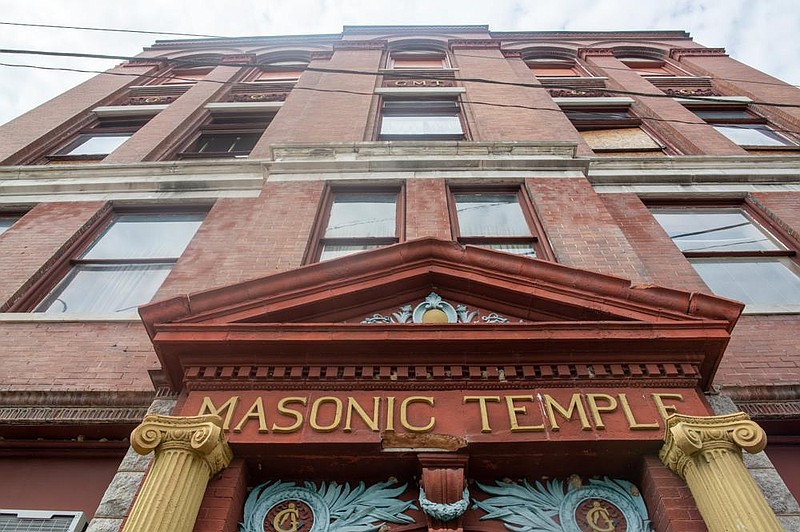 Although now it is abandoned, the Grand Masonic Temple in Pine Bluff has had a storied history.

The idea for the temple was conceived by Grand Master Moses A. Clark in 1902. The cornerstone was laid the same year, but it would take another decade to complete the structure.

The first meeting was held in the building in 1909. The building was damaged by fire in May 1954. Remodeling began in the fall of 1954 and was completed in 1955. It served as the meeting place for the Masons and Order of the Eastern Star and other Masonic houses until 2005.

The organization of the Grand Lodge was established on March 31, 1873, and William Henry Gray, a free-born native of Washington, D.C., was elected the first grand master. Black Masonry thus began a period of rapid growth, and by the 1880s, a movement began to construct a Grand Lodge building.

A group headed by Wiley Jones initiated efforts to persuade the Grand Lodge to be located in Pine Bluff. Jones bought two lots on East Second Avenue and presented them to the lodge. Edwin Cook, a local architect, drew plans for a building. When the Grand Lodge met in Pine Bluff in August 1891, after a "stormy session," the organization gave approval to locate the temple in Pine Bluff.

However, the proposed building was never started because the financing of the structure proved to be an insurmountable problem. But the approval of Pine Bluff as the location of the temple by the Grand Lodge in 1891 at least decided the question as to where the lodge would be built.

By 1902, the Grand Lodge had accumulated enough money to buy a lot and start the building. On March 24, 1902, the Grand Lodge bought Lot 3, Block 40 of Old Town Pine Bluff for $7,000. Gibbs and Sanders, Little Rock architects, were employed to design the building, and on July 7, 1902, W.S. Helton, a Pine Bluff builder, was given a contract to construct a four-story brick and stone structure.

As part of a Grand Lodge meeting, the cornerstone of the building was laid on August 14, 1902, with elaborate ceremonies that involved local dignitaries as well as officials of the Grand Lodge and the Order of the Eastern Star. Reports of the day said that "Fully 900 Masons" marched up Main Street from Jones Park, located at Harding and Main Streets, to the site of the new building for the services.

Funds available for construction were exhausted by the time the lot was bought and foundation was laid. For more than a year, work was suspended on the structure. Through the efforts of J.N. Donohoo and J.C. Corbin, who were Grand Lodge trustees, a loan of $25,000 was obtained from the Peoples Savings Bank of Pine Bluff to complete the building.

Pat Powers of Little Rock was given a contract to finish the structure on the foundation built by Helton. Enough had been completed on the temple to permit the Grand Lodge to hold its annual meeting there beginning on August 8, 1904. Stairways were improvised, and the sessions were held in the lodge hall on the third floor.

In opening the first session, Clark said, "I now sound the gavel for the first time ever in a building of this kind, built and owned by African Americans."

When the Grand Lodge met in August 1912, the last payment was made on the temple's mortgage. At a special ceremony held at exactly the same date, Aug. 14, that the cornerstone was laid 10 years previously, the payment was made and the temple dedicated. In the early morning hours of May 25, 1954, fire struck the building and burned out the third and fourth floors. The structure was covered by insurance, and the building was restored except for a dormer on the roof.

As part of the remodeling, a self-service elevator was installed to make it easier to reach the upper floors of the temple. The work was completed in 1955, and a second cornerstone was installed on the northeast corner of the building above the original stone.

In the day, the first floor of the building contained stores and shops, and the second floor -- in addition to the Grand Lodge's offices -- had several offices that were rented to doctors and dentists. The state now has 184 lodges with 6,000 to 7,000 members and the Grand Lodge continues to hold its annual communications in Pine Bluff each year.

Today the Masonic Temple of Pine Bluff sits vacant. Doors are shuttered and windows boarded. We are hopeful that, like many other historic buildings in Pine Bluff, it will be restored.

See over 200 photos of the Masonic Temple in Pine Bluff by visiting www.AbandonedAR.com . Special thanks to Cromwell Architects and Engineers and the owners for giving us special access. This location is not open to the public.

Michael Schwarz is the vice president of the Abandoned Atlas Foundation. The group's website is https://AbandonedAR.com, and its email. address is the.abandoned.atlas@gmail.com