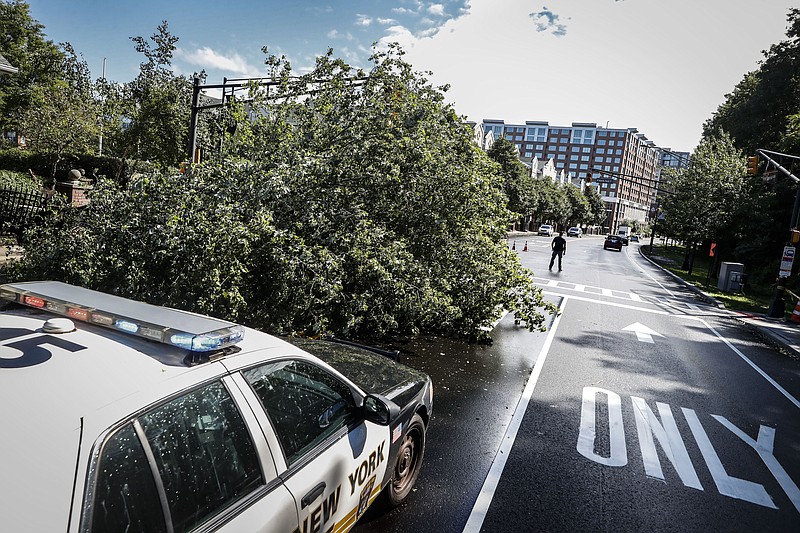 Police officers direct traffic around a fallen tree brought down by heavy rains and wind, Tuesday, Aug. 4, 2020, in West New York, N.J. Tropical Storm Isaias spawned tornadoes and dumped rain during an inland march up the U.S. East Coast, including New Jersey, on Tuesday after making landfall as a hurricane along the North Carolina coast. (AP Photo/John Minchillo)

The Federal Emergency Management Agency has calculated the risk for every county in America for 18 types of natural disasters, such as earthquakes, hurricanes, tornadoes, floods, volcanoes and even tsunamis. And of the more than 3,000 counties, Los Angeles County, Calif., has the highest ranking in the National Risk Index.

The way FEMA calculates the index spotlights places long known as danger spots, like Los Angeles, but some other places highlighted run counter to what most people would think. For instance, eastern cities such as New York and Philadelphia rank far higher on the risk for tornadoes than tornado alley stalwarts Oklahoma and Kansas.

And the county with the biggest coastal flood risk is one in Washington state that's not on the ocean, although its river is tidal.

Those seeming oddities occur because FEMA's index scores how often disasters strike, how many people and how much property are in harm's way, how vulnerable the population is socially and how well the area is able to bounce back. And that results in a high risk assessment for big cities with lots of poor people and expensive property that are ill-prepared to be hit by once-in-a-generation disasters.

While the rankings may seem "counterintuitive," the degree of risk isn't just how often a type of natural disaster strikes a place, but how bad the toll would be, according to FEMA's Mike Grimm.

"They [the top five] are a low frequency, potentially high-consequence event because there's a lot of property exposure in that area," said University of South Carolina Hazards & Vulnerability Research Institute Director Susan Cutter, whose work much of the FEMA calculations are based on. "Therefore, a small tornado can create a large dollar loss."

In New York, people are far less aware of the risk and less prepared -- and that's a problem, Grimm said. The day before he said that, New York had a tornado watch. Days later, the National Weather Service tweeted that in 2020 several cities, mostly along the East Coast, had more tornadoes than Wichita.

In general, Oklahoma is twice as likely to get tornadoes as New York City, but the damage potential is much higher in New York because there are 20 times the people and nearly 20 times the property value at risk, FEMA officials said.

Disaster experts say people have to think about the big disaster that happens only a few times a lifetime at most, but is devastating when it hits -- hurricanes Katrina and Sandy, the 2011 super outbreak of tornadoes, the 1906 San Francisco earthquake or a pandemic.

This new tool, based on calculations by 80 experts over six years, is about "educating homeowners and renters and communities to be more resilient," FEMA's Grimm said, adding that people shouldn't move into or out of a county because of the risk rating. 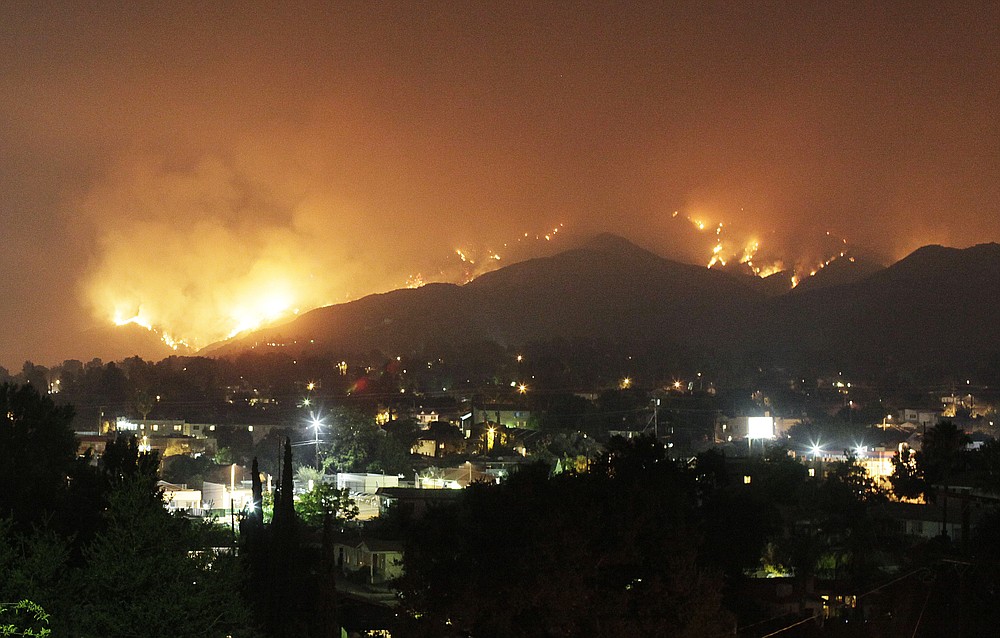 FILE - In this Monday, Aug. 31, 2009 file photo, wildfires rage on the hillsides of the Tujunga area of Los Angeles in the Station fire. (AP Photo/John Lazar) 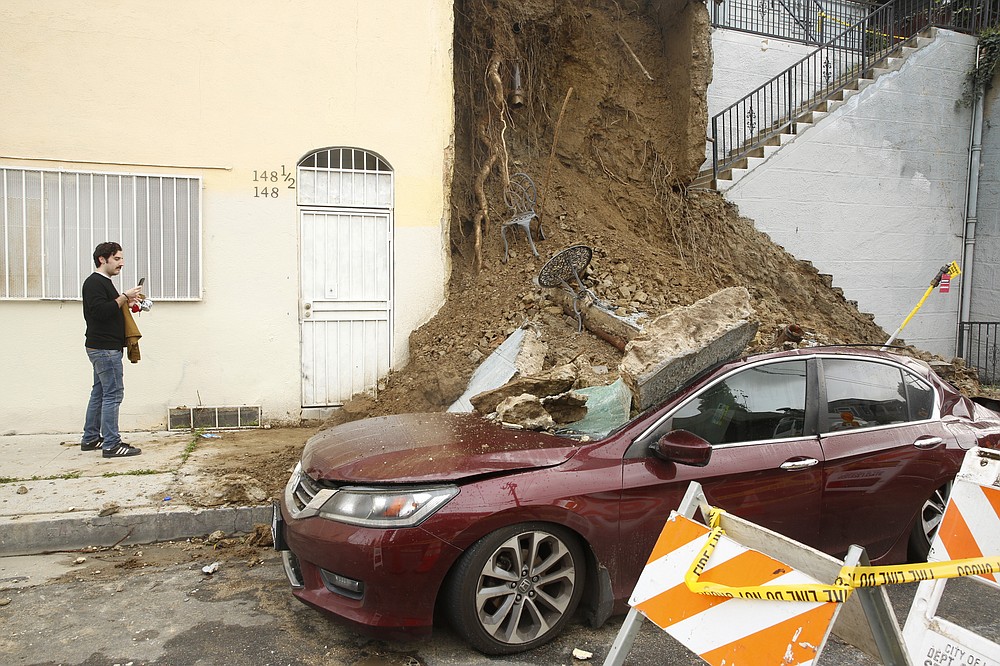 FILE - In this Friday, Jan. 18, 2019 file photo, Michael Osborne, a film director, documents the damage after being able to open the door to his home, left, after a mudslide early morning from beneath a house next to his home in Los Angeles. No one was hurt. Three days of rain put a dent in California's drought. (AP Photo/Damian Dovarganes) 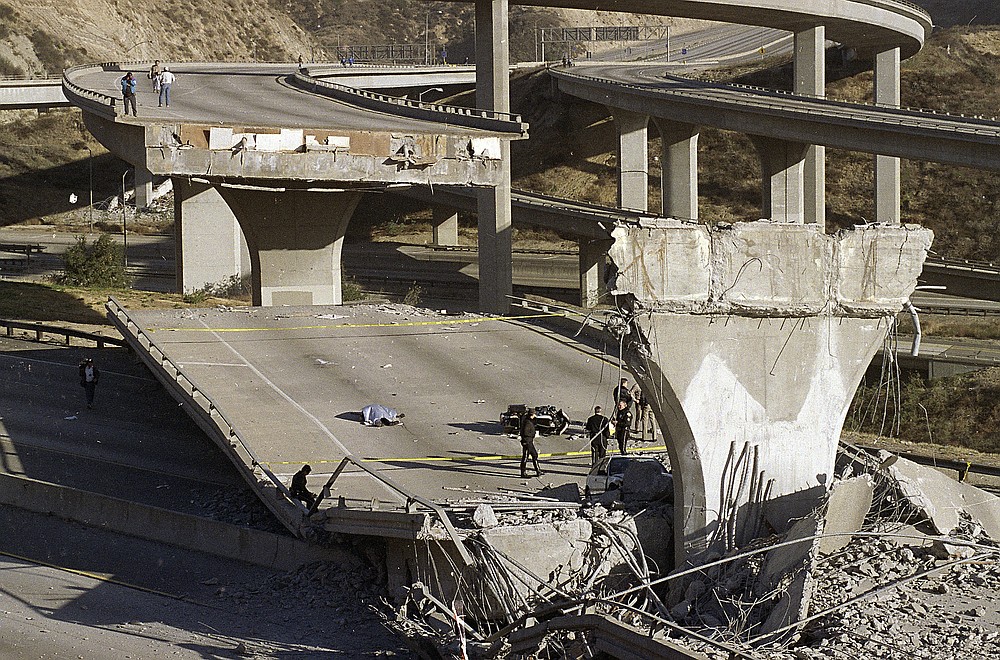 FILE - In this Jan. 17, 1994, file photo, the covered body of Los Angeles Police Officer Clarence Wayne Dean lies near his motorcycle which plunged off the State Highway 14 overpass that collapsed onto Interstate 5, after a magnitude-6.7 Northridge earthquake in Los Angeles. (AP Photo/Doug Pizac, File) 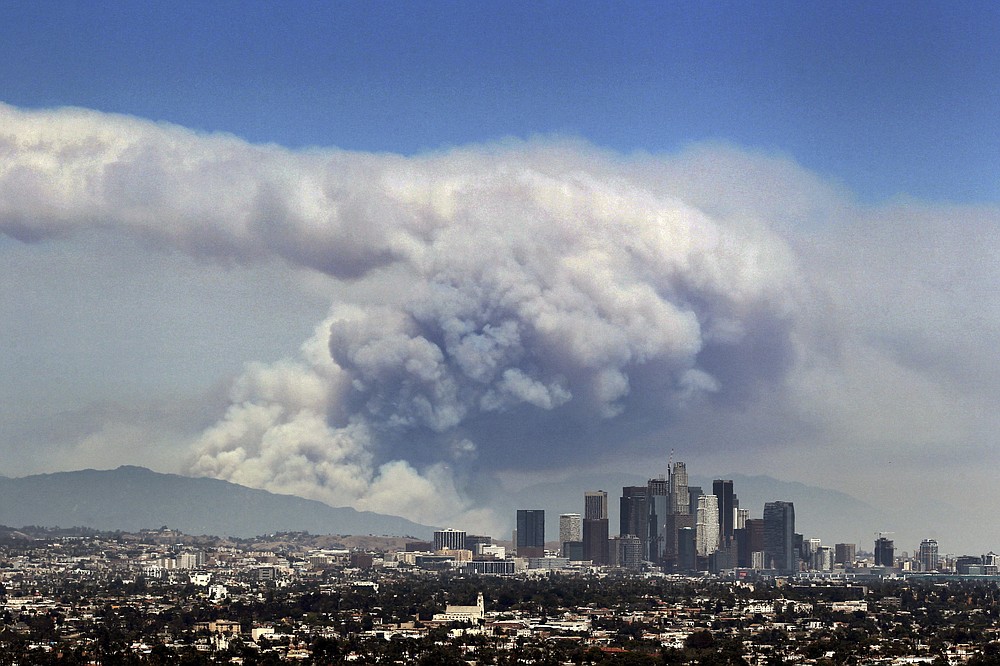 FILE - In this Monday, June 20, 2016 file photo, smoke from wildfires burning in Angeles National Forest fills the sky behind the Los Angeles skyline. The Federal Emergency Management Agency has calculated the risk for every county in America for 18 types of natural disasters, such as earthquakes, hurricanes, tornadoes, floods, volcanos and even tsunamis. And of the more than 3,000 counties,  Los Angeles County has the highest ranking in the National Risk Index. (AP Photo/Ringo H.W. Chiu) 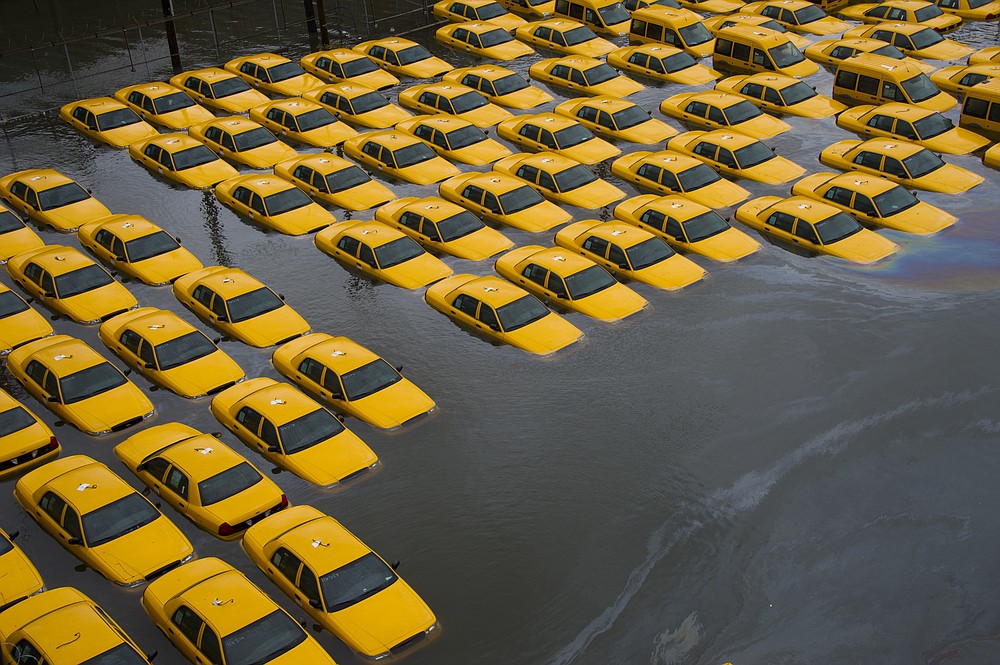 FILE - In this Tuesday, Oct. 30, 2012 file photo, a parking lot full of yellow cabs is flooded as a result of Superstorm Sandy in Hoboken, NJ. (AP Photo/Charles Sykes) 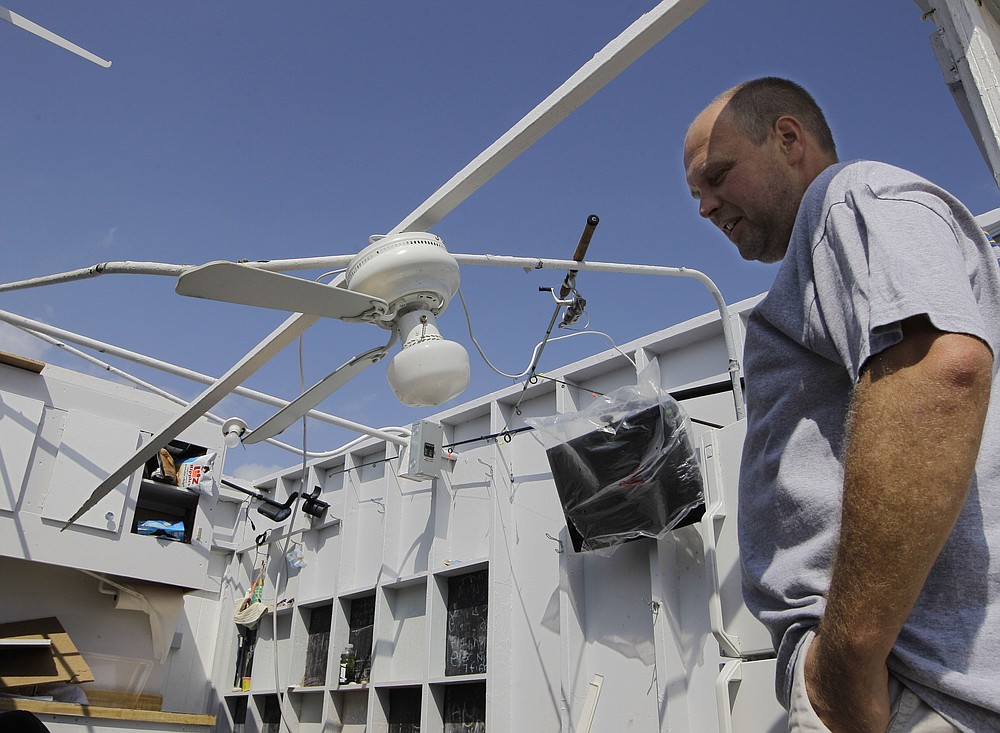 FILE - In this Saturday, Sept. 8, 2012 file photo, Denny Fallon pauses while cleaning up debris following a possible tornado that tore the roof off his family's cabana at the Breezy Point Surf Club in the Queens borough of New York. A tornado swept out of the sea and hit the beachfront neighborhood in New York City, hurling debris in the air, knocking out power and startling residents who once thought of twisters as a Midwestern phenomenon. (AP Photo/Kathy Willens) 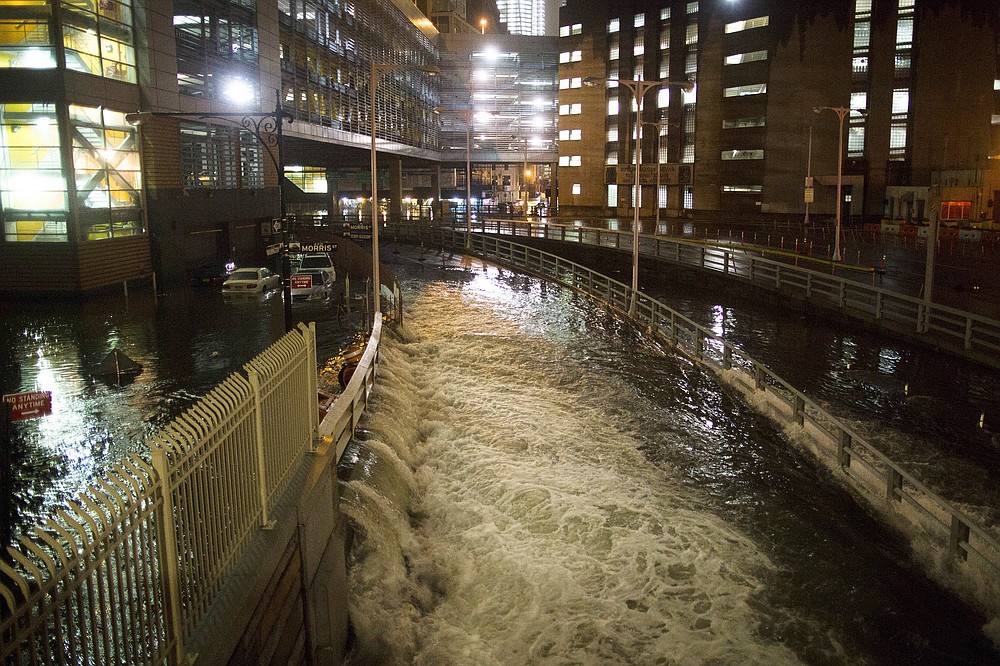 FILE - In this Oct. 29, 2012 file photo, seawater floods the entrance to the Brooklyn Battery Tunnel during Superstorm Sandy in New York. Disaster experts say people have to think about the big disaster that happens only a few times a lifetime at most, but is devastating when it hits — Hurricane Katrina, Superstorm Sandy, the 2011 super outbreak of tornadoes, the 1906 San Francisco earthquake or a horrible pandemic. (AP Photo/ John Minchillo, File) 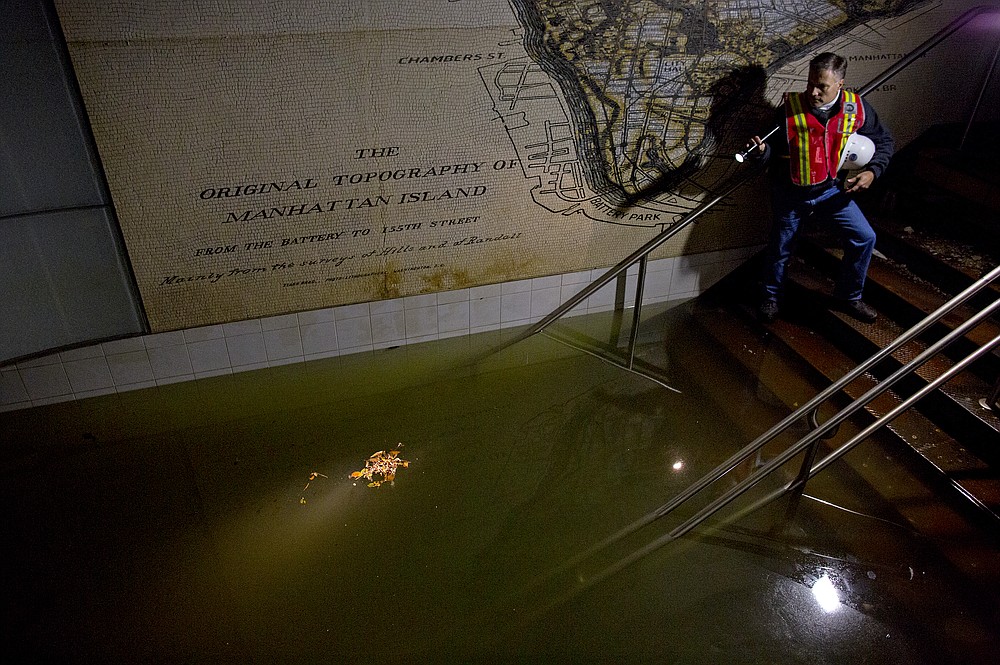 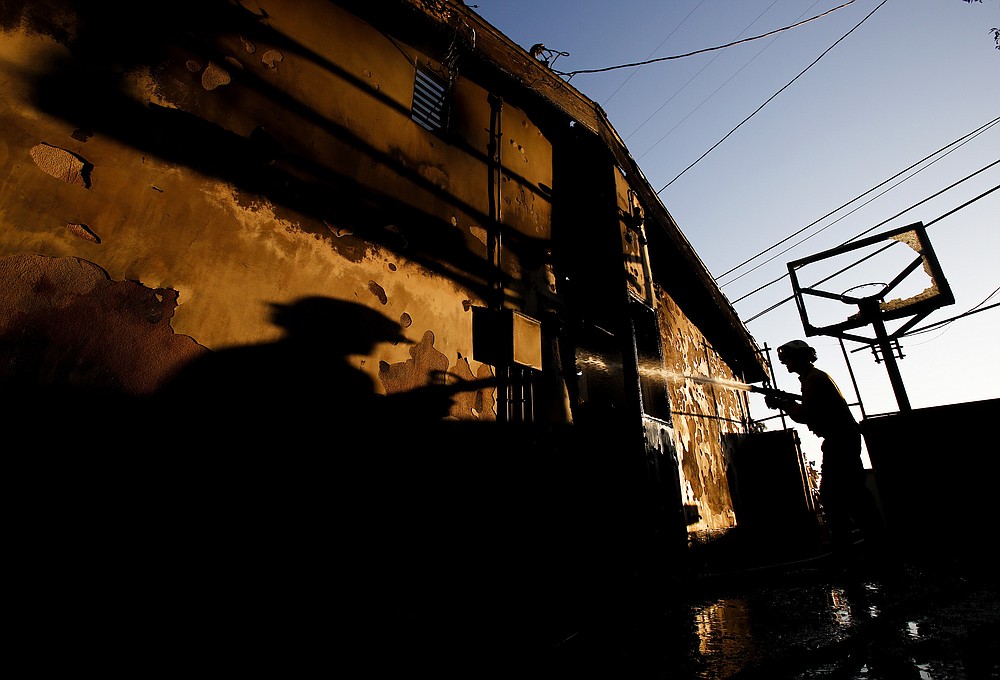 FILE - In this Monday, Oct. 28, 2019 file photo, a firefighter works on a house destroyed by the Getty fire in Los Angeles. (AP Photo/Ringo H.W. Chiu)
ADVERTISEMENT