Act likely to set up debate not seen since Civil War by Compiled by Democrat-Gazette Staff From Wire Reports | January 3, 2021 at 4:34 a.m. 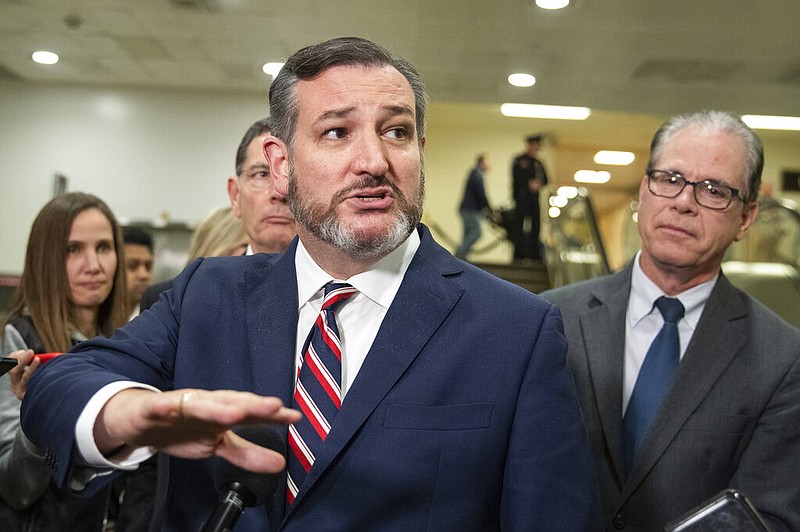 U.S. Sen. Ted Cruz, R-Texas, speaks to reporters at the Capitol in Washington in this Jan. 27, 2020, file photo as Sen. Mike Braun (right), R-Ind., looks on. Both Cruz and Braun have joined President Donald Trump’s effort to challenge the results of the 2020 presidential election.

WASHINGTON -- A growing number of Republican lawmakers are joining President Donald Trump's effort to overturn the election, pledging to reject the results when Congress meets this week to count the Electoral College votes and certify President-elect Joe Biden's win.

Sen. Ted Cruz, R-Texas, on Saturday announced a coalition of 11 senators and senators-elect who have been enlisted for Trump's effort to challenge the results of the election.

This follows the declaration from Sen. Josh Hawley, R-Mo., who was the first to buck Senate leadership by saying he would join with House Republicans in objecting to the state tallies during Wednesday's joint session of Congress.

Trump's refusal to accept defeat is forcing Republicans to make choices that will likely set the contours of the post-Trump era. Hawley and Cruz are both seen as among potential 2024 presidential contenders.

Senate Majority Leader Mitch McConnell, R-Ky., had urged his party not to try to overturn what nonpartisan election officials have concluded was a free and fair vote.

The lawmakers largely acknowledged Saturday that they will not succeed in preventing Biden from being inaugurated on Jan. 20 after he won the Electoral College 306-232. Their challenges, and those from House Republicans, represent the most sweeping effort to undo a presidential election outcome since the Civil War.

By law, if members from both the House and the Senate object to the Electoral College slates, then both chambers must debate and then vote on the contest.

Rep. Mo Brooks, R-Ala., has said he will object to certifying the results, and with Hawley's support, that challenge would hold weight, prompting senators and representatives to retreat to their chambers on opposite sides of the Capitol for a two-hour debate and then a vote on whether to disqualify a state's votes. Both the Democratic-controlled House and Republican-controlled Senate would have to agree to toss out a state's electoral votes -- something that has not happened since the 19th century and is not expected this time.

"We do not take this action lightly," Cruz and the other senators said in a joint statement.

They vowed to vote against certain state electors Wednesday unless Congress appoints an electoral commission to immediately conduct an audit of the election results. They are zeroing in on the states where Trump has raised claims of voter fraud.

In their statement, the Republicans cited poll results showing that most members of their party believe the election was "rigged," an assertion that Trump has made for months, and which has been repeated in the right-wing news media.

"A fair and credible audit -- conducted expeditiously and completed well before January 20 -- would dramatically improve Americans' faith in our electoral process and would significantly enhance the legitimacy of whoever becomes our next president," they wrote. "We are acting not to thwart the democratic process, but rather to protect it."

Trump, the first president to lose a reelection bid in almost 30 years, has attributed his defeat to widespread voter fraud, despite the consensus of nonpartisan election officials and even Trump's attorney general that there was none. Of the roughly 50 lawsuits the president and his allies have filed challenging election results, nearly all have been dismissed or dropped. Trump has also lost twice at the U.S. Supreme Court.

The days ahead are expected to do little to change the outcome of the election.

"Joe Biden will be inaugurated on January 20th, and no publicity stunt will change that," said Sen. Amy Klobuchar, D-Minn., the top Democrat on the panel overseeing the Electoral College count.

Klobuchar said the Republican effort to create a federal commission "to supersede state certifications" is wrong.

"It is undemocratic. It is un-American. And fortunately it will be unsuccessful. In the end, democracy will prevail," she said in a statement.

The convening of the joint session to count the Electoral College votes is usually routine. While objections have surfaced before -- in 2017, several House Democrats challenged Trump's win -- few have approached this level.

On the other side of the Republican divide, several senators spoke out Saturday against Cruz and Hawley's effort.

Sen. Lisa Murkowski, R-Alaska, said in a statement that she will vote to affirm the election and urged colleagues in both parties to join her in "maintaining confidence" in elections "so that we ensure we have the continued trust of the American people."

Sen. Pat Toomey, R-Pa., said a "fundamental, defining feature of a democratic republic is the right of the people to elect their own leaders." He said the effort by Hawley, Cruz and others "to overturn the results of the 2020 presidential election in swing states like Pennsylvania directly undermines this right."

Caught in the middle is Vice President Mike Pence, who faces growing pressure from Trump's allies over his ceremonial role in presiding over the session Wednesday. His chief of staff, Marc Short, said in a statement Saturday that Pence "welcomes the efforts of members of the House and Senate to use the authority they have under the law to raise objections."

Several Republicans have indicated they are under pressure from constituents back home to show they are fighting for Trump.

Sen. John Thune, R-S.D., the second-ranking Republican in the Senate, told reporters at the Capitol that leadership was allowing senators to "vote their conscience."

Thune's remarks as the GOP whip in charge of rounding up votes show that Republican leadership is not putting its muscle behind Trump's demands, but allowing senators to choose their course. He noted the gravity of questioning the election outcome.

"This is an issue that's incredibly consequential, incredibly rare historically and very precedent-setting," he said. "This is a big vote."

Pence will be carefully watched as he presides over what is typically a routine vote count in Congress but is now heading toward a prolonged showdown that could extend into Wednesday night, depending on how many challenges are mounted.

McConnell convened a conference call with Republican senators Thursday specifically to address the coming joint session and logistics of tallying the vote, according to several Republicans granted anonymity to discuss the private call.

The Republican leader pointedly called on Hawley to answer questions about his challenge to Biden's victory, according to two of the Republicans.

But there was no response because Hawley was a no-show, the Republicans said.

Hawley's office said he sent an email afterward to his colleagues explaining his views. In the email, Hawley said constituents back home are "angry and disillusioned" with the outcome of the election.

McConnell had previously warned GOP senators not to participate in raising objections, saying it would be a terrible vote for colleagues. In essence, lawmakers would be forced to choose between the will of the outgoing president and that of the voters.

Additionally, a judge in Texas dismissed a lawsuit from Rep. Louie Gohmert, R-Texas, and a group of Arizona electors seeking to force Pence to step outside mere ceremony and shape the outcome of the vote.

U.S. District Judge Jeremy Kernodle, a Trump appointee from Gohmert's hometown of Tyler, Texas, threw out the lawsuit late Friday, ruling that he and other plaintiffs -- including the GOP chairwoman in Arizona and that state's defeated slate of Republican electors -- lack standing.

Late Friday on Newsmax, Gohmert said he had sought redress in court "so that you didn't have to have riots and violence in the street."

"Bottom line is, the court is saying, 'We're not going to touch this, you have no remedy,'" Gohmert said. "Basically, in effect, the ruling would be that you've got to go to the streets and be as violent as antifa and BLM."

On Saturday afternoon, Gohmert insisted that "violence is not the answer" and that he was not advocating otherwise.

"I have not encouraged and unequivocally do not advocate for violence," he said in a written statement that maintained he was only "recognizing what lies ahead when the institutions created by a self-governing people to peacefully resolve disputes hide from their responsibility."

Gohmert and his fellow plaintiffs wanted the court to let Pence toss out Biden's victories in a handful of states, nullifying tens of millions of ballots.

Kernodle ruled that Gohmert's lawsuit hinged on a series of hypothetical allegations "far too uncertain to support standing."

The judge also found that as a lone congressman, Gohmert cannot sue on the basis of alleged harm to the House as a whole, even if he could prove such harm.

Pence sided against Gohmert in court, asking Kernodle to throw out the lawsuit. A 14-page filing by the Justice Department argued that the lawsuit should be aimed at Congress, not Pence: "It is the role prescribed for the Senate and the House of Representatives in the Electoral Count Act to which plaintiffs object, not any actions that Vice President Pence has taken."

Information for this article was contributed by Lisa Mascaro and Mary Clare Jalonick of The Associated Press; by Luke Broadwater of The New York Times; by Colby Itkowitz, Mike DeBonis and Seung Min Kim of The Washington Post; and by Elizabeth Thompson of The Dallas Morning News. 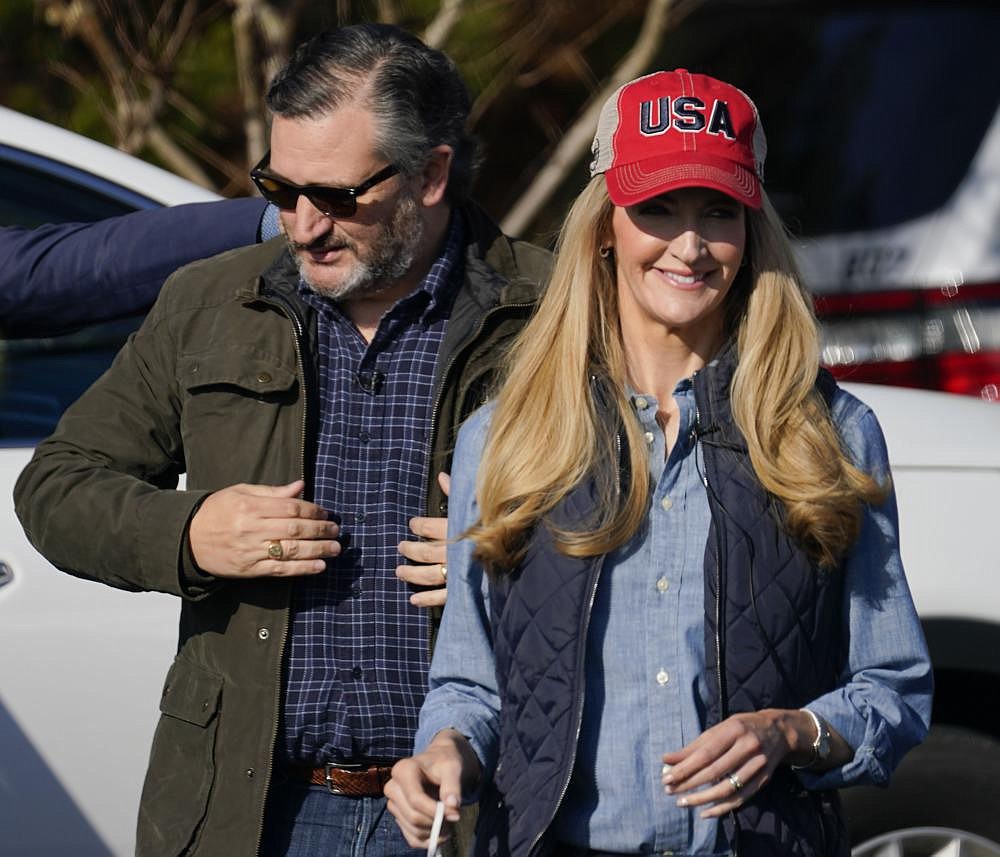 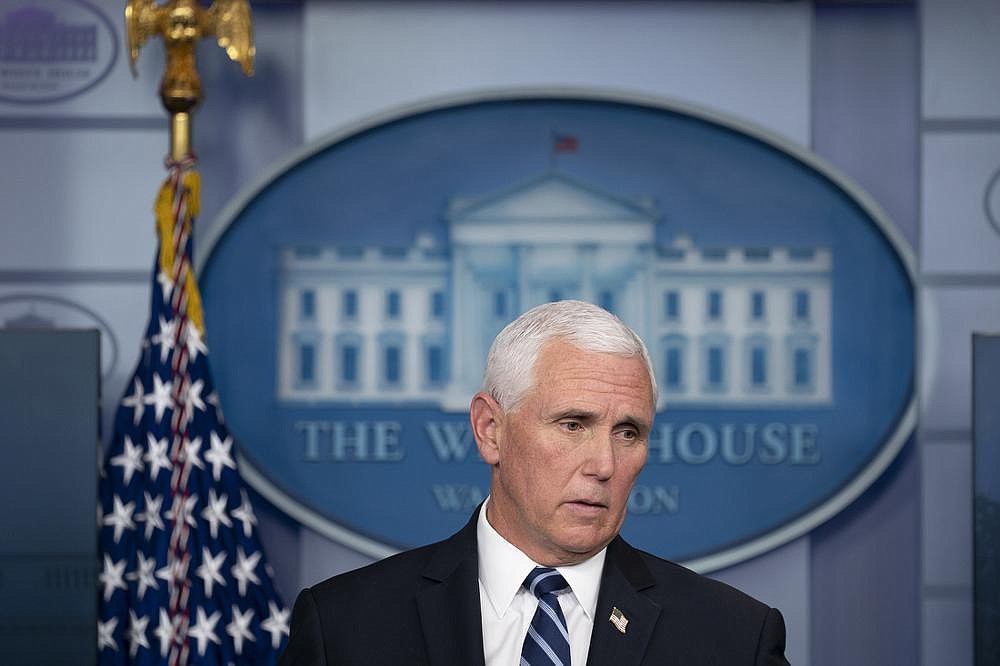 Vice President Mike Pence, who faces growing pressure over his ceremonial role in certifying President-elect Joe Biden’s election, “welcomes the efforts of members of the House and Senate to use the authority they have under the law to raise objections,” an aide said in a statement Saturday. (The New York Times/Stefani Reynolds) 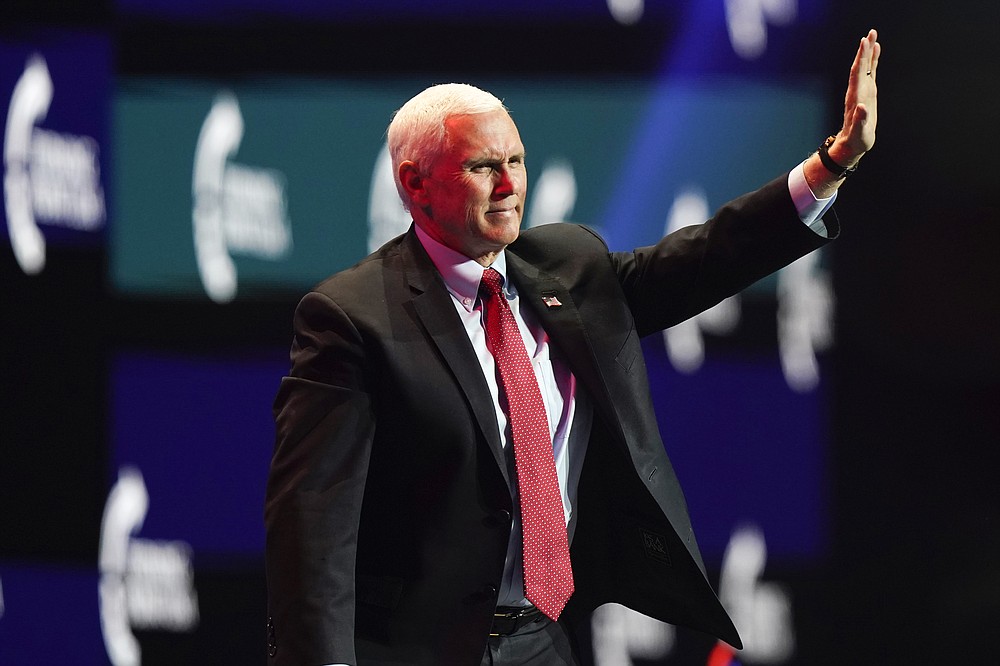 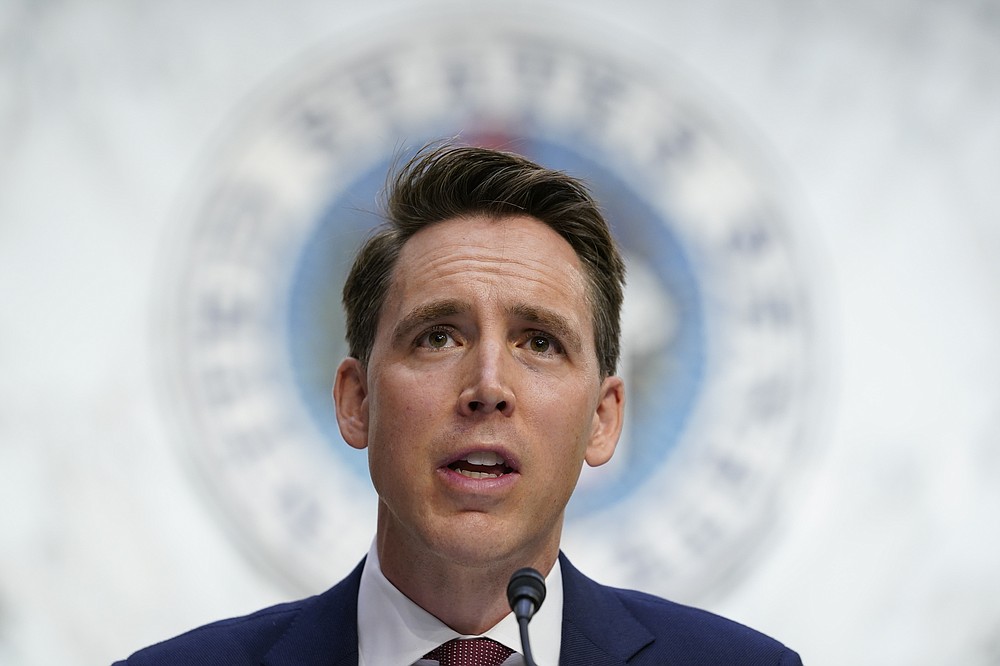 FILE - In this Oct. 12, 2020, file photo Sen. Josh Hawley, R-Mo., speaks during a confirmation hearing for Supreme Court nominee Amy Coney Barrett before the Senate Judiciary Committee on Capitol Hill in Washington. Hawley, says he will raise objections when the Congress meets to affirm President-elect Joe Biden’s victory in the election, forcing House and Senate votes that are likely to delay — but in no way alter — the final certification of Biden's win. (AP Photo/Susan Walsh, Pool, File) 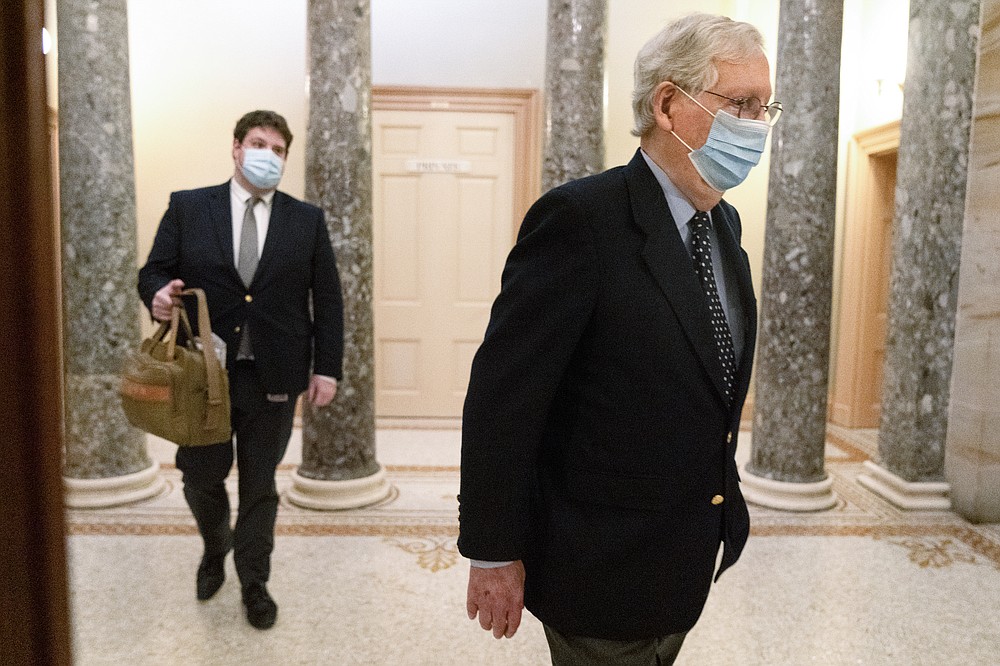 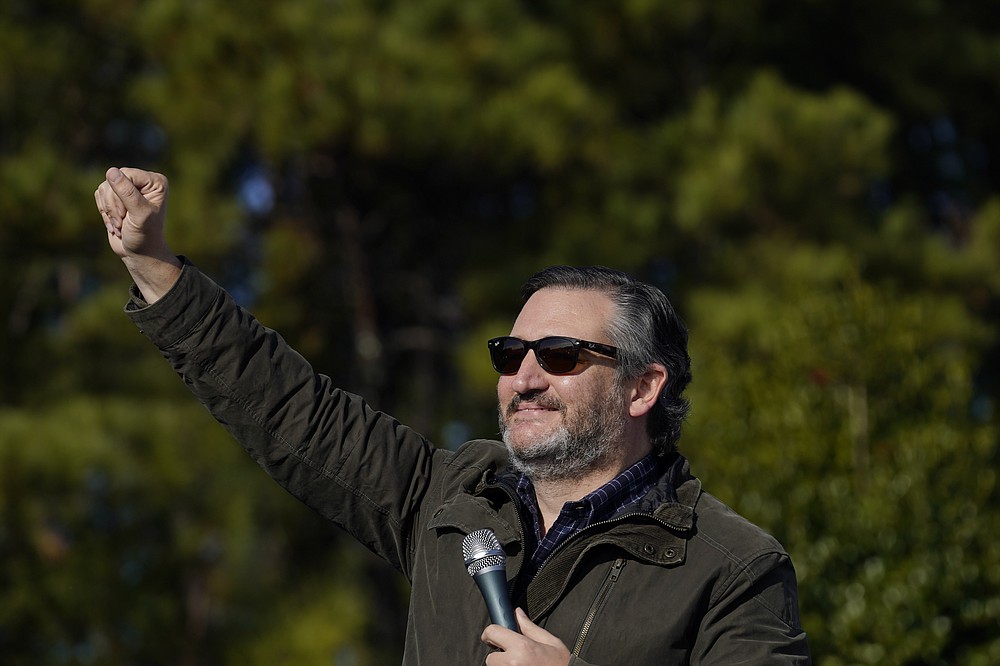 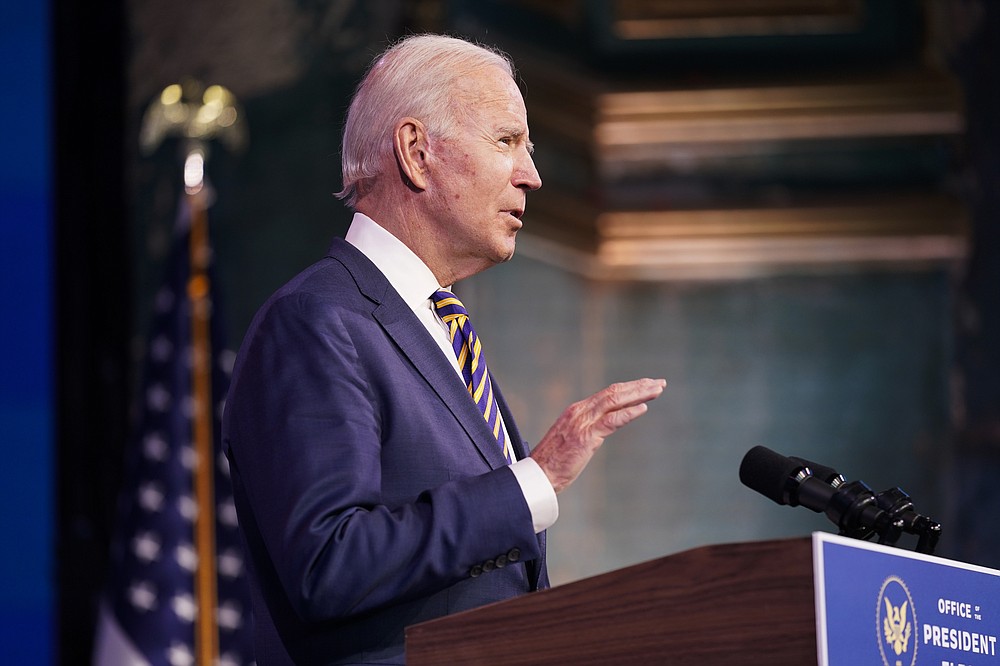