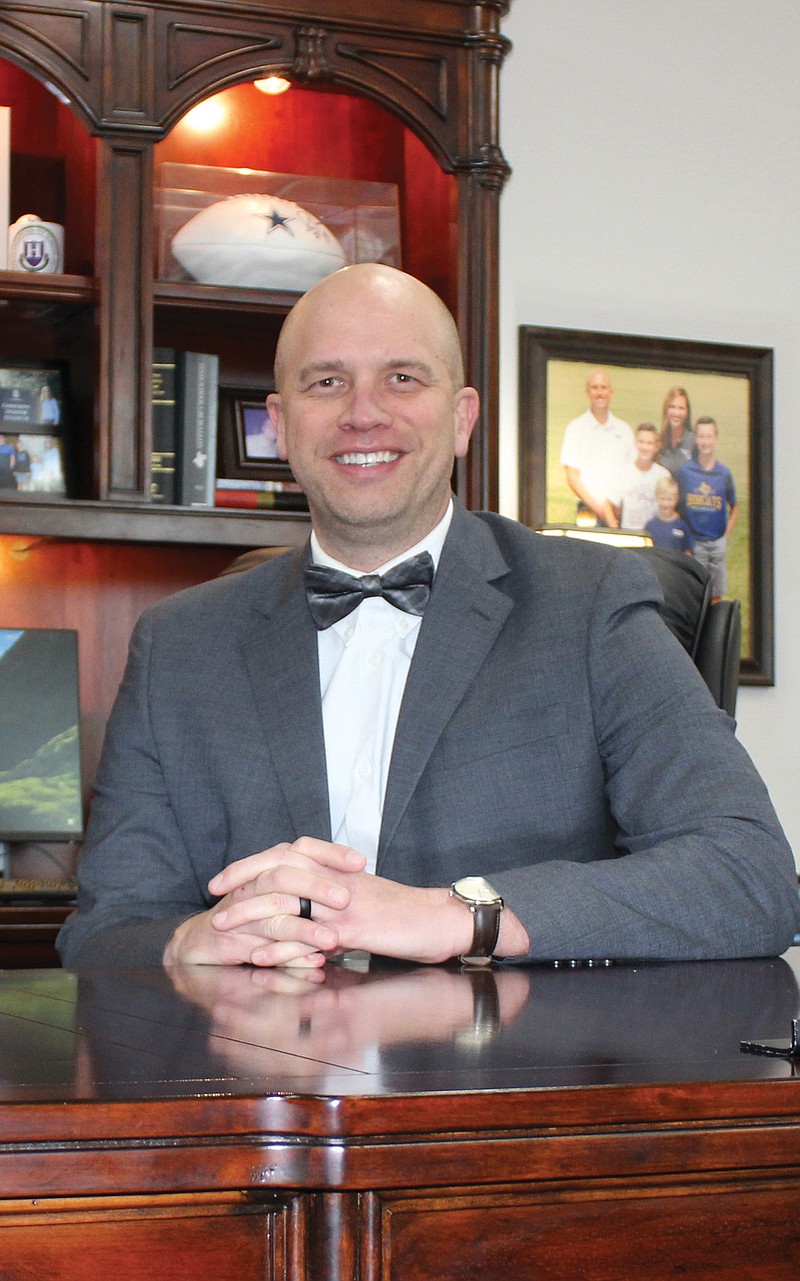 When Jeff Collum left his position at the Benton School District in 2016, he moved to Texas to help take care of his father-in-law, Walter Causey, who had become very ill. Within a month of Collum moving, Causey died.

“Our goal was to help my mother-in-law in transition and take care of her,” said Collum, who was recently named the new superintendent for the Conway School District. “When this opportunity came to me, we spent a lot of time praying about it.

“When a job like Conway comes open, you absolutely have to stop and think about it.”

Collum’s mother-in-law, Patrica Causey, will be making the move to Conway with Collum and his family.

“I wasn’t looking to leave [Hallsville], but this was an entire family decision and something we prayed about a whole lot,” Collum said. “After we had peace about that decision, we began to walk through the process and sought God’s direction.

“We are glad we can bring [my mother-in-law] with us.”

Collum, who has spent the past five years serving as superintendent of the Hallsville Independent School District in Texas, replaces former Superintendent Greg Murry, who announced his retirement in June. Collum will officially start in his position in Conway on June 1.

In a Dec. 9 article in the Arkansas Democrat-Gazette, school board president Trip Leach said, “We are excited to work with him to set goals for the future of the Conway Public Schools together.

“His commitment to education and dedication to hard work, financial stewardship, data-driven decisions and the value of all stakeholders gives us full confidence moving forward in the days to come.”

Collum worked for Eddie Dunn as a teacher and administrator in Texas at Troup High School, which is about a 30-minute drive south of Tyler. Dunn is now retired after almost 50 years in education.

“I have been fortunate to have mentored a handful of excellent educators who are now serving in Texas,” Dunn said. “Jeff was an excellent mentoree — he soaked it up. He really has the desire to be excellent, not just average.

“He has demonstrated over the past decade how his promise and potential are coming to fruition.”

Dunn said the Conway School District is very fortunate to get a man of such high integrity.

Collum said a number of things drew him to the Conway job, including rekindling the friendships and people that he and his family have stayed in touch with since they left Arkansas almost five years ago.

“When you look at the district and the job itself, it is a very appealing job,” he said. “At Hallsville, we have about 5,000 students at our brick-and-mortar location, but we also have about 11,000 students virtually across the state of Texas.

“They are both high-performing school systems, and both jobs are highly sought after, and both have excellent communities to raise families. … All of that played into it and helped bring that decision to light for us.”

Collum said he and his staff at Hallsville have done a lot of great things, and it is a hard place to leave.

“We were able to pass a $55 million bond last year in November, which allowed us to expand our facilities and build a brand new elementary school, and we are currently adding a high school auditorium,” he said. “We were able to upgrade our bus fleet and purchase 300 Chromebooks as part of our 1-to-1 initiative, which has proved valuable in the midst of the [COVID-19] pandemic.

“We purchased new band uniforms and upgraded our agriculture facilities. We tried to touch every campus and every department — I’m very proud of that.”

Collum said that when he first arrived in Texas, the teachers had not received a raise in a number of years, and last year, the district was able to provide an 8- to 10-percent raise for teachers.

“We also implemented our Texas Virtual Academy, which, when it began, had only about 21 students enrolled, and now we have more than 11,000 students,” Collum said. “It was a huge step forward for the district. It was a unique partnership and unique revenue.

“We have gotten a lot done in a short period of time.”

Collum said that because of COVID-19, this year has been one of the most challenging years of his career.

“We are dealing with the unknown and trying to stay ahead of things,” he said. “As superintendent, you would like to plan, but some of these factors were just unknown.

Randy Reid worked with Collum for about four years when Reid was the superintendent for the Tyler Independent School District. The two have remained close, with Reid serving as a mentor to Collum at times.

“Probably his greatest attribute is the fact that he is a tremendous people person and is able to work with anybody,” Reid said of Collum. “Rarely have I seen people who have the capacity to communicate well with so many different people, … and I think that is the mark of a really good leader.”

Reid, who retired from the Keller Independent School District in Texas about three years ago, said there was one particular situation when a teacher died unexpectedly at one of the high schools, and Collum was the primary person to amend the situation and help return some normalcy in the building.

“He is a strong superintendent candidate who is not afraid to reach out and ask the questions needed,” Reid said. “Jeff realizes and knows where his strengths and knowledge base are.

“I think he is going to do a fantastic job at Conway. He knows how to work with different types of communities, and he will be fine wherever he chooses to go. … He will do great in Conway and will quickly became a favorite of the community.”

Collum said he doesn’t have any preconceived ideas for what he wants to accomplish in Conway. His first goals are to learn the community, study the landscape and understand the things that are already in place.

“We will set the vision together,” he said. “I know there is a tremendous amount of potential with the universities in town and the technology available.

“The sky is the limit with what we can do. We just have to collaborate to figure out what Conway needs to do next.”