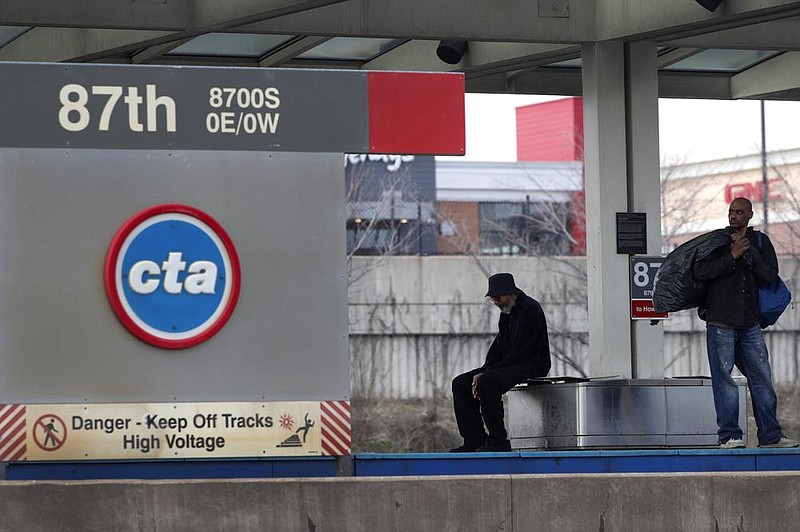 Men wait for a Chicago Transit Authority Red Line train on Chi- cago’s South Side in this April file photo. Bedford Park, a hub for manufacturing employers just outside the Chicago city limits, has started a pilot program to help employees commute to work. (AP)

CHICAGO -- Home Chef is in the midst of a hiring spree at its Bedford Park, Ill., plant, where employees prep, package and ship meal kits that have soared in popularity during the pandemic.

But filling those jobs can be a challenge, and not only because it requires toiling in 40-degree temperatures.

Bedford Park, a hub for manufacturing employers just outside the Chicago city limits, can be difficult to get to for those who don't drive. Without a car, the commute to the plant requires multiple buses and trains and a long walk through an industrial park, often at odd hours when public transit schedules are thin.

Bedford Park heard from so many employers about transit challenges that the village spearheaded a pilot program that offers employees a way to plan and book their commutes, including free shuttles and partially subsidized Uber rides to complete the last mile to the job.

Transit experts hope the pilot offers lessons that could be applied across the region as the rise of e-commerce spurs job growth in industrial areas that are often not close to public transportation. Employers hope addressing transit needs attracts a wider pool of candidates and helps workers arrive on time.

"The largest barrier is that people are showing up to work late because of public transit," said Mallory Rademacher, plant manager at Home Chef's facility, which has moved some start times to accommodate employees with difficult commutes. "With [covid-19], that has increased in difficulty because there are fewer buses and trains running."

Limited transportation has long been a hurdle to employment, hindering growth at some companies and preventing people who need work from accessing available jobs.

In the Chicago area, residents of "economically disconnected areas," where there is a high concentration of low-income, minority or limited-English residents, often don't have job opportunities nearby and can't efficiently get to where the jobs are, according to the Chicago Metropolitan Agency for Planning. Residents living in predominantly Black communities endure the longest commutes, the agency said.

Brian Williams, 36, lives in the Roseland neighborhood on Chicago's Far South Side and works through a temp agency at a warehouse in Bolingbrook, earning $12.50 an hour packaging cellphones. He rises at 4 a.m. to take a bus to an "L" train to a meeting spot, where he and other workers climb into a shared van for the 45-minute drive to northwest suburbs, where many industrial jobs are located.

Williams, who owns a pickup but prefers not to use it for the long drive to work because of the wear and tear, is grateful for the job and the shared van, which costs him $12 daily, but said the commute leaves him exhausted.

"It's a big hassle to deal with just to survive because you're not making a lot of money," he said.

The coronavirus pandemic has hurt many industries but it also has fueled growth in the Chicago area in distribution and logistics, a sector often located near expressways but not public transit.

"The rebound is in manufacturing, transportation, warehousing, utilities," said Karin Norington-Reaves, chief executive officer of the Chicago Cook Workforce Partnership. "A lot of that is from e-commerce."

The rise of online shopping has meant a boom in industrial real estate, particularly along the Interstate 80 and Interstate 55 corridors. Will County grew its warehouse footprint by 50% during the past decade and accounted for some of the biggest job growth in the region outside of Chicago's Loop. Since 2010, the seven-county Chicago area has added 367 warehouses and distribution facilities, with more than 100 million square feet of rentable space, according to CoStar data provided by CMAP.

Amazon is driving a lot of the growth. The Seattle-based e-commerce giant, which employs 23,000 people in Illinois, next year plans to open fulfillment centers in Markham and Matteson that each will employ 1,000 people.

Romeoville, a logistics and distribution hub on the I-55 subcorridor, has grown from about 7,000 jobs in 2004 to 24,500 jobs today, including more than 1,800 who work at the Amazon fulfillment center, its biggest employer.

Most employees drive to work from neighboring suburbs, but some companies provide van pools in partnership with Pace to shuttle employees around its three large industrial parks, said Josh Parker, Romeoville's director of community development.

The suburb continues to add 2 to 3 million square feet of business space per year and more employers, including a Crate and Barrel fulfillment center set to open next year with up to 200 jobs.

"Workforce is one of the top issues, just having enough people to fill the jobs," Parker said. "We're competing with the larger region and there is only so far the employee will travel to get to work."

A range of solutions has emerged to address the industrial workforce's transit issue. In Little Village, vans crawl through the mostly Mexican neighborhood before dawn picking up temp workers employed at suburban factories. Known as raiteros, a Spanglish term for those who give rides, the vans are sometimes paid for by the companies, but a lawsuit has alleged some illegally charge the workers. The case is pending.

Amazon says when it develops fulfillment centers in the Chicago area it works closely with suburban transit provider Pace on everything from the design of transit stops and pedestrian safety to providing bus service aligned to the site's shift schedule.

In some cases, local governments whose economies depend on a business-friendly environment are taking the initiative.

That is the case in Bedford Park, which has just 500 residents but 26,000 employees working in its industrial zones. The village partnered with the Regional Transit Authority and Cook County to fund the $600,000 pilot of a transit-planning app called Connect2Work.

The village, home to the nation's largest railway clearing yard, backs up to Midway Airport, where there is a CTA Orange Line, and is near plenty of bus lines on Cicero Avenue, but employers have asked for last-mile and late-night solutions.

"We've heard from several employers that they want to hire more people for late-night shifts but they have a hard time retaining them," said Joe Ronovsky, chief business officer with the village. "If they don't have access to a car there simply isn't transit at 1 a.m."

Employees who download the Connect2Work app to their phones can find the different routes available to get to and from work. Once in the Bedford Park area they can take a free shuttle operated by Via, which will adjust routes depending on demand, or a subsidized Uber (employees pay the first $3 of the ride and the rest, up to $10, is covered by the program).

The two-year pilot is a way of testing "mobility as a service," a concept trending in transportation planning circles that is intended to make carless commuting easier by providing a single digital channel where users can plan, book and pay for multiple types of transportation services, including public transit, scooters, bike-sharing and ride-hailing.

"It could be transformational to urban mobility," said Curtis Witek, senior project manager at Antero Group, a planning firm that was brought on to design the pilot.