No proposal necessary, many couples say 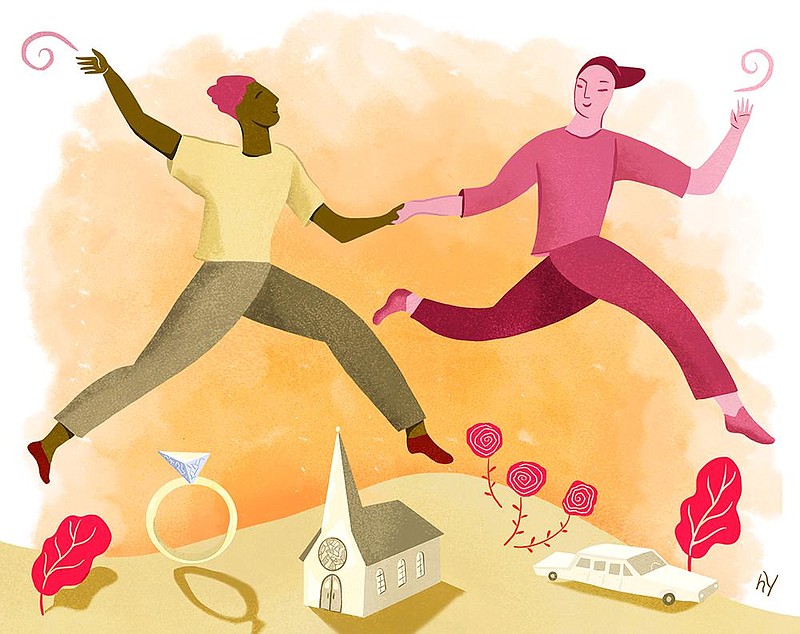 An orchestrated proposal is often deemed an essential step toward marriage but many couples, already living together and sharing bank accounts, consider it unnecessary. (The New York Times/Heidi Younger)

Hana LaRock, a 29-year-old freelance writer from Jersey City, N.J., and her husband had known since the early years of their relationship that they would eventually marry. They were cohabiting, sharing bank accounts and planning their lives together. But because he felt pressure to stage the perfect proposal, he kept putting it off. On their six-year anniversary, she told him, "Let's just do it," and they got engaged. No proposal was necessary.

The proposal is often deemed an essential step toward marriage, having been around since ancient Rome. But many couples today consider it obsolete or superfluous. Some could do without the engagement ring as well.

"I found the whole ring thing to be shallow and one-sided," said Margaret MacQuarrie, a 57-year-old marketing and communications professional in Nova Scotia, Canada. She decided to get married via mutual discussion with her husband, George Bauer, a retired marketing professional. She also found the notion of wearing a ring to signify that she was "taken" sexist and old-fashioned.

Traditional heterosexual proposals, where men usually do the asking and women respond, strike some as inegalitarian, said Ellen Lamont, an associate professor of sociology at Appalachian State University. Between 2010 and 2015 she interviewed 105 people ages 25-40 in the San Francisco Bay Area about their relationships for her recent book "The Mating Game: How Gender Still Shapes How We Date."

Lamont's research found that many people decided to get married during conversations with their partners, rather than through proposals. LGBTQ people in particular expressed a view of proposals as overly gendered and preferred instead to make marriage a joint decision. "People said, 'I don't want to remake heterosexual norms within my relationship -- those norms are contrived, they are gendered, and those are not things I want,'" she said.

That was how Alex Adams, a 38-year-old literary critic in Jarrow, England, felt when he decided to marry his partner, Hannah Burman, a clinical psychologist. "It was important to emphasize our queerness so that it wasn't swallowed up in the great straight institution," he said. "And quite aside from that, we simply aren't interested in the trappings and rituals of hetero romance. Aside from it feeling cheesy to us, all of the power implications in a lot of it feel gross."

Andy Bandyopadhyay, a 31-year-old executive for a nonprofit financial services consultancy in New York, who identifies as a bisexual transgender man and is married to a man, also eschewed a proposal and other wedding traditions. "I didn't see myself in the 'bride wears a long white wedding gown and is walked down the aisle of a church to get married' narrative," he said.

Other couples consider proposals overly performative, which may be especially true with showy social media proposals. Samantha Bellinger, a wedding planner based in North Hero, Vt., says she has seen fewer proposals since the coronavirus pandemic, and the ones she has observed on social media are smaller and more intimate.

Sometimes, it's for purely logistical reasons that marriage comes up in conversation before anyone even has the chance to propose. Amanda Kedaigle, a 30-year-old scientist in Boston who works at the Broad Institute of MIT and Harvard, began discussing marriage with her now-husband, Eric Kedaigle, a computer engineer, when she learned she needed expensive dental surgery that would be better covered by his insurance.

"We did the math and realized we would legitimately rather spend money on a wedding than a surgery that would be thousands of dollars cheaper after we were married," she said.

Similarly, Jedrzej Kostecki, a 42-year-old web developer in Warsaw, Poland, and his wife, Katarzyna Kostecka, a project manager at a translation agency, decided together to get married while she was pregnant with their daughter so they could raise her as a married couple.

Marriages without proposals are also common in older or previously married couples who may be more interested in realistic plans than romantic gestures. For them, said Marissa Nelson, a couples therapist based in Washington, "it's less about the proposal and more about the commitment and making sure someone wants to spend their life with you."

For Cassandra Phoenix, a 50-year-old customer service representative for a health care provider in Madison, Wis., the decision to get married for a second time was an ongoing discussion, as she and her husband were both ambivalent about it. At first he was reluctant, having been jaded from his first marriage, which she understood, but then he changed his mind, and she agreed.

Even when a proposal takes place, both parties often play a role in planning it. Karen Hopper Usher, a 36-year-old journalist in Cadillac, Mich., began talking to her partner about marriage early on because she was getting older and wanted to have children, and the idea of waiting for him to propose was too nerve-racking for her. So, they ordered a ring together, picked a date, and started planning the wedding before he formally proposed.

Stories such as Hopper Usher's appear to be more the norm rather than the exception. In a 2017 survey by the wedding site the Knot, only 35% of brides said their proposals were surprises. And Lamont said that the 22 proposals she had analyzed for her book were more often for show. Most married people she spoke with, she said, had discussed marriage with their partners before the engagement, sometimes even setting timetables and picking out rings. Only three of the 19 married or engaged women waited for their partners to propose without weighing in themselves, she said. Many put pressure on their partners, with eight of them giving ultimatums.

Despite the tradition of men initiating engagements, Nelson has also found that in heterosexual relationships, it's often women who will first bring up marriage, then their partners will plan proposals.

Bellinger agreed with that scenario. "The general trend is that the couple decides that they want to get married, and only then does one of the partners concoct a romantic proposal plan," she said. "It is rarely a surprise that the proposal is happening -- the date and timing might be a surprise, but it is usually expected."

With or without a proposal, Nelson believes joint conversations about marriage are important and she encourages starting them early on to ensure both partner's goals for the relationship match. She suggests couples discuss how they envision their marriage in terms of child-rearing, finances and division of household chores. "You've got to talk through it, and not just 'You want to get married? I want to get married too,' but 'What is our breaking point? What are the things we absolutely would not accept?'" she said.

If couples choose not to have a proposal, Nelson encourages them to find their own way to celebrate their choice to get married. "It doesn't have to be a proposal, but it's something symbolic to affirm their commitment to the next step and celebrate the love they have for each other," she said. "Whatever feels good to them so that they feel valued, they feel loved, and they feel cherished."