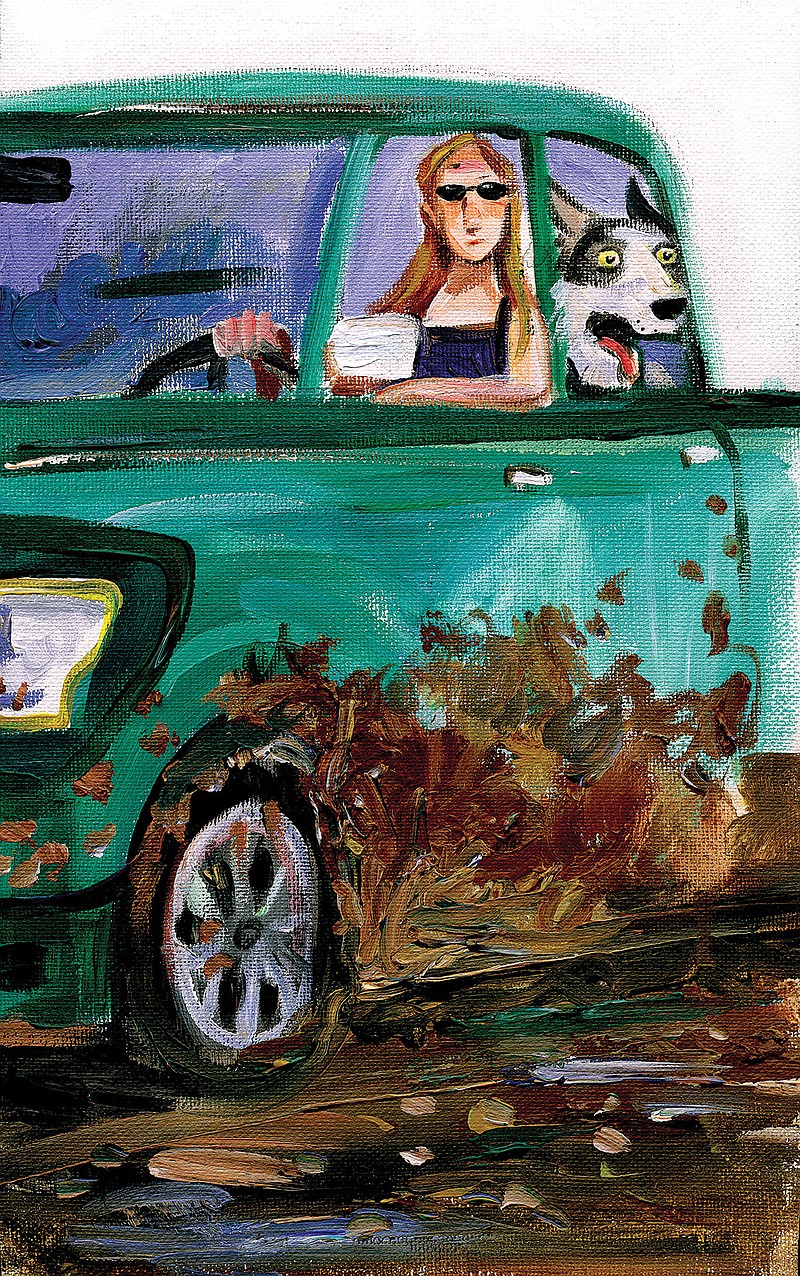 U.S. 67 enters the state near Corning in the north and heads southwest, crossing into Texas at Texarkana.

It's the old road that I'll take from Benton to Texarkana, remembering a time when I was growing up at Arkadelphia and Interstate 30 had yet to be completed.

The most common trips in those days were to visit my grandparents at their small house on Olive Street in Benton. But I also remember trips in the other direction to that exotic place called Texas, stopping at the boll weevil check station near the Red River at Fulton so the man could ask: "Got any cotton? Got any sweet potatoes?"

This highway passes through 13 Arkansas counties, following the course of the Southwest Trail.

"U.S. 67 extends 1,560 miles, beginning in Presidio, Texas, at the border with Mexico, and ending near Sabula, Iowa," writes Steve Teske of the Butler Center for Arkansas Studies. "The Arkansas portion of the highway is roughly 280 miles."

The highway separates the Ouachita and Ozark mountains to the north and west from the Delta and the Gulf Coastal Plain to the south and east.

"This boundary is such a natural path of travel that even spring and summer thunderstorms frequently move along the same route," Teske writes. "Undoubtedly, Native Americans traveled portions of this route. After the Louisiana Purchase in 1803, as the U.S. government began improving travel through the territory, a military road was constructed from Missouri through Little Rock and south to Fulton on the Red River. ... When the Cairo & Fulton Railroad began surveying a route to connect southern Illinois to the Red River across Missouri and Arkansas, the same route was used once again.

"The railroad became the Iron Mountain Railroad and was later acquired by the Missouri Pacific Railroad. The route is still used by the Union Pacific Railroad. Federal and state funding became available for highways early in the 1920s as automobile and truck traffic was beginning to take the place of railroad traffic.

"The roads that would become U.S. 67 were first designated part of the original Arkansas State Highway System in 1923. A joint commission of the U.S. Bureau of Public Roads and the American Association of State Highway Officials created the first national system of highways with nine federal highways established in Arkansas."

U.S. 67 was among those federal highways. Much of the pavement was laid from 1928-31, though work was slowed once the Great Depression began in 1929. The highway was 18 feet wide.

In the 1930s, the Works Progress Administration and other Depression-era agencies made improvements to the highway. Travel patterns began changing with construction of the interstates.

"Until the 1950s, highways existed to connect cities and towns to one another," Teske writes. "The beginning of the interstate highway system caused drivers to begin traveling directly between large cities, bypassing the smaller towns. Interstate 30, from Little Rock south to Texarkana and then into Texas, was one of the original interstate highways planned for Arkansas. The new interstate highway made travel to Texas easier but took business away from many of the communities that had relied on travelers' income to support stores, restaurants and gas stations.

"Meanwhile, many segments of Highway 67 were widened or replaced with wider pavement between 1952-58. Highway 67 has continued to be used by Arkansans traveling shorter distances in the southwestern quarter of the state."

On this trip to Texarkana, I pass parts of the old road that have been placed on the National Register of Historic Places. There's a bridge and rest area in Clark County built by the National Youth Adminstration in 1936. There's also a stretch of almost six miles in Miller County on the register.

I cross the Saline River at Benton and exit Interstate 30 to start the trip.

The first community I pass through is Haskell, which has grown from 239 residents in the 1970 census to an estimated 4,600 people today. White flight out of Pulaski County fueled growth in the Harmony Grove School District.

"The post office closed in 1973 with mail being sent to Benton," Teske writes. "However, by the end of the 20th century, the growing population of cities such as Benton and Bryant meant population growth for Haskell as well. Between 2000 and 2010, the population jumped from 2,645 to 3,990.

"Most of the population is white, although the 2010 census counted 263 African American and 114 Hispanic residents. The Harmony Grove School District serves more than 1,000 students in its elementary, junior high and high schools."

In 1929, 3,000 acres were purchased by the state along the highway to build what was later known as the Benton Unit of the Arkansas State Hospital. The hospital had been established in 1873 as the Arkansas Lunatic Asylum in Little Rock. By 1917-18, the daily population was an average of 1,970 with a certified capacity of 1,964. It was obvious expansion was needed.

Finally, in 1929, the Arkansas Legislature passed a law authorizing a bond issue to provide funds for the new unit in Saline County.

The first patients arrived in 1931. WPA workers completed additional buildings at the site in 1934-35. Those buildings were used as a filming site for the psychiatric hospital that was portrayed in the 1996 movie "Sling Blade," directed by and starring native Arkansan Billy Bob Thornton. The Benton Unit eventually became the Arkansas Health Center, the only state-operated nursing facility.

I leave Saline County and enter Hot Spring County, which was carved by the Arkansas Territorial Legislature out of part of Clark County in 1829. Hot Spring County was Arkansas' 18th county. The orginal county seat at Hot Springs was moved to Rockport on the Ouachita River and later to Malvern in October 1879.

The first community in Hot Spring County that I pass through on this trip is Glen Rose, where life has long been centered around the local school district. The district traces its roots back to 1927 when six small schools in the county were consolidated. A four-room school building opened in 1928. The district now has about 1,000 students and is known for its strong high school football teams.

As I approach Perla and Malvern, my thoughts turn to bricks. Yes, bricks.

There were dozens of brick plants in Arkansas during the early 1900s. Little Rock, Fort Smith, Clarksville, El Dorado, Hope, Jonesboro, Pine Bluff, Mansfield, Pocahontas and Wynne were among the cities with brick-making operations. By 2009, there were just four plants in the state, and they were all owned by Acme Brick Co.

"Malvern Brick & Tile was started in 1925 and, at one time, had a line of bricks in colors such as blue, green, pink and yellow. Other companies sprayed the color onto the face of the brick, but Malvern Brick used stains that colored the whole body of the bricks. It's not likely that any other company produced bricks with the through-the-body colors. Malvern Brick was purchased by Acme in the late 1970s."

The fully automated Perla East Gate Plant opened in 1967. Acme's original Malvern plant was replaced by what's known as the Ouachita Plant in 1980.

Perla, which had a population of 241 in the 2010 census, has long been known for bricks. Yet it was the timber industry that led to the establishment of the community. Adalbert Strauss, who was born in Germany in 1848, established Malvern Lumber Co. in 1880. On a train headed to Hot Springs for treatment at a bathhouse, he noticed an abundance of timber.

Strauss bought 45,000 acres, paying 50 cents an acre. He started a sawmill and named the surrounding community after his oldest daughter, Perla Marie Strauss.

Malvern was established in 1873 as a stop on the Cairo & Fulton line. An annual festival known as the Malvern Brickfest is held to celebrate the importance of bricks to the area. The festival began in 1981.

The first courthouse at Malvern was constructed in 1888. The Clem Bottling Works began production at Malvern in 1907. Clem soft drinks became a well-known product in this part of Arkansas and continued to be produced until 1972.

Leaving Malvern, the trip on U.S. 67 takes us next through the community of Central. When we would drive the old highway to my grandparents' house, my father would always mention having played basketball games at Central. He graduated from Benton High School in 1942 and later played basketball and other sports at the college level at what's now Ouachita Baptist University.

"The Central showers had dirt floors," he would always say. "They had boards in there to walk on. If you slipped off the board, your feet got muddy."

"Several one-room schools operated in the area, and the school boards of these institutions worked to consolidate into one larger school to offer more classes and expand the curriculum to include high school," writes historian David Sesser of Henderson State University. "The site for the school was selected due to its central location to each of the schools being consolidated. ... The first year of operation of the new school was 1916."

The next community I pass through is Donaldson, a center of the area's timber industry at one time and also once a stop on the Missouri Pacific line. The state constructed a concrete viaduct over the railroad tracks at Donaldson in 1934 since U.S. 67 was so busy in those days. A new viaduct was completed in 2018.

Students from Donaldson, which had a population of 301 in the 2010 census, attend school in the Ouachita School District. The district's facilities are along the highway, just on the other side of the Ouachita River at Midway.

Though there are several Arkansas communities that use the name Midway, this is the only incorporated town with that name. Midway had a population of 389 in the 2010 census.

"A network of routes known as the Southwest Trail extended across the state from Randolph County through Little Rock and south to Fulton on the Red River," Teske writes. "One of those routes passed through the Midway area, and it's likely that the town was named because it was about halfway between Little Rock and Fulton. A post office opened at Midway in 1850. The Midway Cemetery was established during the Civil War. A stagecoach stop was also a prominent landmark of the community in the 19th century."

Midway residents voted to incorporate as a city in 2000.

The final community I pass through before leaving Hot Spring County is Friendship, which had 176 residents in the 2010 census. Students from here also attend the Ouachita School District. The first post office at Friendship opened in October 1886. The town didn't officially incorporate until 1938.

As the trip continues to the southwest, I cross DeRoche Creek (sometimes called DeRoche Bayou) and enter Clark County, which was created in December 1818 as part of the Missouri Territory. When the Arkansas Territory was established in 1819, Clark County was one of the original five Arkansas counties.

Next Sunday: Arkadelphia to Texarkana