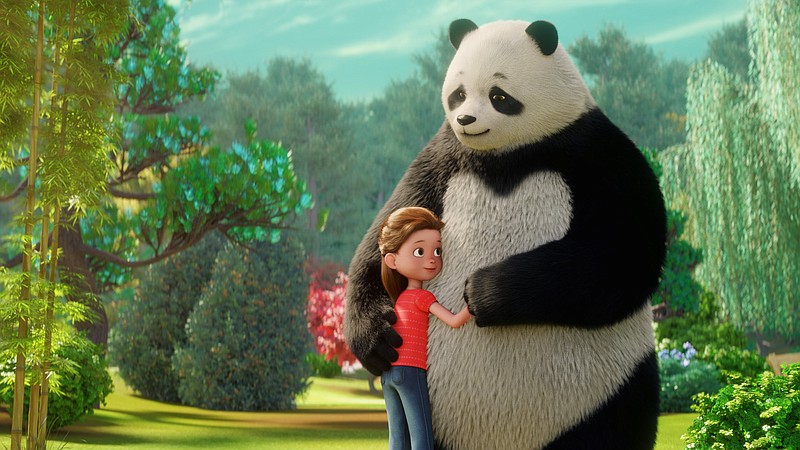 Addy (left) is comforted by Stillwater the panda in a scene from the animated children’s series “Stillwater,” streaming on Apple TV+. The stories are based on the character Stillwater from the beloved children’s book series “Zen Stories” by Jon J. Muth. (Apple TV+ via AP)

NEW YORK — When the producers of the new animated children's series "Stillwater" asked Mallika Chopra to be the show's "mindfulness consultant," the meditation expert, author and speaker said she was immediately on board.

"What an amazing title to have, right?" Chopra said.

Children's television has evolved since the days of Bugs Bunny and Roadrunner smashing Wile E. Coyote with a hammer. "Stillwater" — which started streaming on Apple TV+ last month — aims to teach subtle life lessons through a wise panda who forges a special friendship with the family next door. The stories are based on the character Stillwater from the beloved children's book series "Zen Stories" by Jon J. Muth.

With beautiful animation and a quiet approach, "Stillwater" teaches kids to meet disappointment and frustration with patience and kindness. Apple hired Chopra help translate the vibe and lessons of "Zen Stories" to a television audience.

Chopra has written several books geared toward children and has a new book coming out in March: "Just Be You: Ask Questions, Set Intentions, Be Your Special Self and More." She's also the daughter of alternative medicine and wellness expert Deepak Chopra, so meditation and wellness has dominated her personal and professional lives.

The younger Chopra helped launch the show by reading scripts and offering her special expertise. "They have done the most incredible job of storytelling and building characters and then sharing the lessons in this way, which is just not kind of didactic or 'how-to.' It's joyful and really magical," Chopra said.

The show's executive producer and writer Rob Hoegee, says Chopra helps communicate the psychology of preschool children and their needs. "One of the great things Mallika has been able to do for us now that the show has launched is be able to better contextualize what mindfulness is, how it's important to us and how the show can fit into that," Hoegee said.

The producers incorporated coping skills like breathing deeply and the sound and calmness of nature into the storylines, which Chopra says is a great tool to emphasize experience in the moment.

"There's a clip where they're outside getting a new perspective on the rain. And it's such a beautiful clip of changing perspective. But also, in that clip, there's the sound of the rain. This is the experience you can have of imagining the smell of rain," she said.

Aside from work on "Stillwater," Chopra has been busy this past year trying to help others cope in the pandemic. She has been challenging people to get comfortable with uncertainty.

"What I can offer is just moments where we can connect through breaths, be accepting of anger, frustration, and fear with our kids. You know, they're feeling that. But we, as parents, are feeling that as well. So a lot of what I've been talking to groups about this [past] year is ... accepting that it's OK to feel angry, it's OK to be fearful and sad," Chopra said.

"The other thing is we haven't had the ritual of mourning and grief. And that also isn't anchoring us as a society," she said. "That's something we're going to have to process over time because we're not processing it right now. It's just too overwhelming."

As the daughter of one of the most famous New Age leaders and meditation experts, Chopra started meditating when she was 9. She says Western society's acceptance of the practice has taken decades, but it has come a long way since people thought her father was a "witch doctor selling snake oil."

"These are wisdom traditions which have lasted thousands of years," Chopra said. "Those who practice these different techniques, we feel how they help us as parents when we tell our kids to take a deep breath in and out, to stop for a moment, we see how they can self regulate better. "

The long-term effects of the isolation and anxiety of quarantining concern Chopra, but she says she's hoping to get past this "dark time" in the mental health of adults, and especially children. "That's going to be a big, big hurdle that we have to continue to address because we are seeing, sadly, increases in diagnoses and suicide rates. It's heartbreaking."

Chopra surprises people when she admits that her own meditation practice has been irregular, but she returns to it when she needs it. She's a mother to two teenagers and says despite her work, she has had a "messy journey" with normal family dynamics.

"We all get angry and frustrated and need to let things go," she said. "But it's just when you have a technique, like so many of these that are shared in the show, we know how to self-regulate better. We know how to communicate a little bit better. We have more empathy and compassion naturally, because we've been going through these practices."