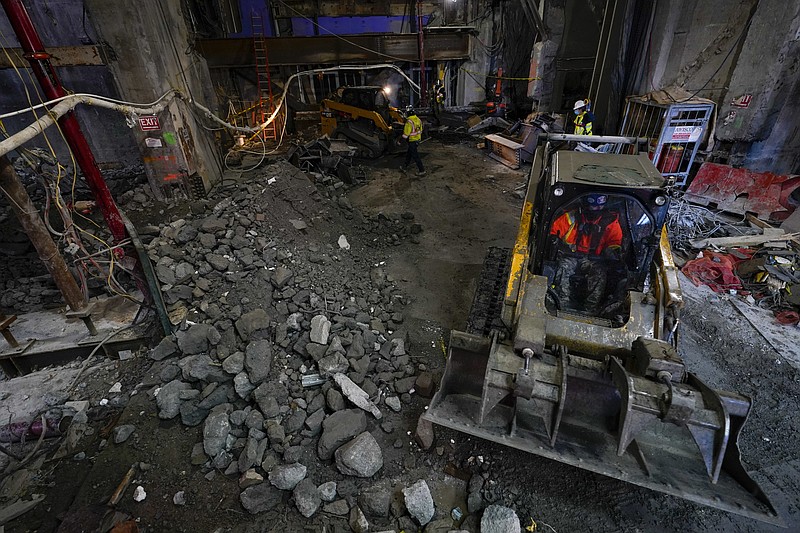 Construction workers clear out debris from the demolition of the original building at TSX Broadway under construction, Thursday, Oct. 29, 2020, in New York's, Times Square. The 46-story mixed-use property will house 75,000 square feet of retail space, a a 4,000-square-foot performance venue including an outdoor stage, an outdoor food and beverage terrace and a luxury hotel. U.S. construction spending rose 0.3% in September, the fourth straight monthly gain after a coronavirus-caused spring swoon. (AP Photo/Mary Altaffer)

WASHINGTON -- Spending on U.S. construction projects increased 0.9% in November as strength in homebuilding offset weakness in other parts of the construction industry.

The November gain followed a bigger 1.6% rise in October and left construction spending up 4.4% through the first 11 months of 2020 compared with the same period in 2019, according to the Commerce Department.

For November, spending on residential construction rose 2.7% with single-family construction surging 5.1% while apartment construction was flat, according to the new data released Monday. Record low mortgage rates have spurred strong demand for housing even as a global pandemic resulted in widespread lockdowns for other parts of the economy.

While housing activity, fueled by low supplies of available homes, stands 16.1% higher than it did a year ago, spending on private nonresidential projects is 9.5% below the levels of a year ago with hotel and motel construction down 26.5% from the level in November 2019 and office construction down 6.6%.

Many analysts believe the extended period of working from home for many Americans brought on by the coronavirus will translate into lower demand for office space in coming years as businesses opt to allow employees to do more work away from the office.

For November, spending on nonresidential projects fell 0.8% with spending for office buildings dropping a sharp 8.1%. Spending on government projects dipped 0.2% in November. Many state and local governments are facing severe budget constraints as a sharp recession has cut into tax revenue.

Record-low mortgage rates were supposed to make it easier for homebuyers. Instead, they've helped push affordability to a 12-year low.

Buyers in the fourth quarter needed to spend almost 30% of the average wage to afford a typical house, the biggest share for any three-month period since 2008, according to preliminary figures from Attom Data Solutions. Low borrowing costs, now below 3% for a 30-year loan, have spurred a buying frenzy, driving up prices across the country as shoppers compete for a shrinking supply of listings.

During the pandemic, prices have increased faster than earnings, leaping by double digits in 79% of the 499 counties included in the report. More than half of those counties are now less affordable than their historic averages, Attom said in a report Thursday.

Mortgage rates ended 2020 near the lowest on record, with the average for a 30-year loan at 2.67%, Freddie Mac said Thursday. Freddie Mac is short for the Federal Home Loan Mortgage Corp.

"The future remains wholly uncertain and affordability could swing back into positive territory," said Todd Teta, chief product officer at Attom. "But, for now, things are going in the wrong direction for buyers."

Information for this article was contributed by Martin Crutsinger of The Associated Press and by Prashant Gopal of Bloomberg News (TNS).