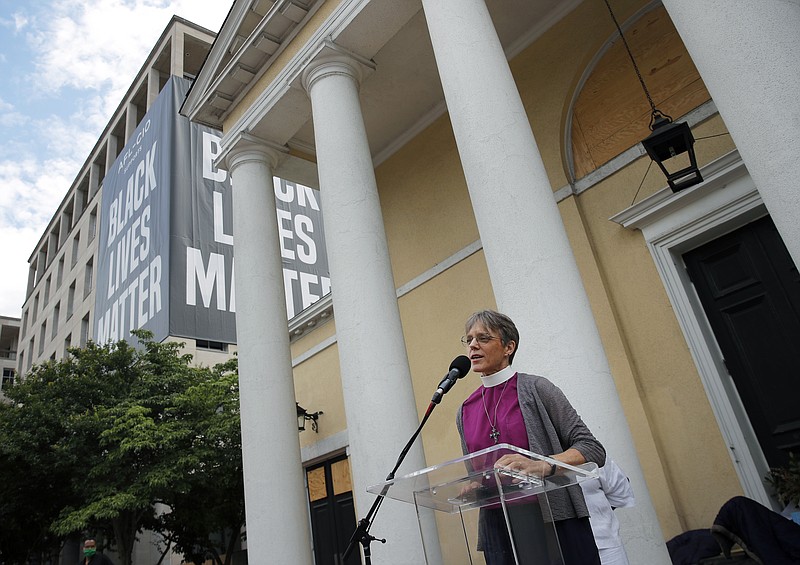 FILE - In this June 19, 2020 file photo, Rev. Mariann Budde, bishop of Washington’s Episcopal diocese, speaks during a service outside St. John's Episcopal Church near the White House in Washington. Budde is among more than 2,000 faith leaders and faith-based activists who signed a statement that is set to be released Monday, Jan. 4, 2021, urging members of Congress “to honor” the result of November’s election by avoiding “a delayed and drawn out objection” on Wednesday, Jan. 6 when President-elect Joe Biden’s win is set to be certified. (AP Photo/Carolyn Kaster, File)

WASHINGTON -- More than 2,000 faith leaders and religious activists are calling on members of Congress to honor the result of November's election and avoid "a delayed and drawn out objection" this week when President-elect Joe Biden's win is set to be certified.

Signatories to the statement released Monday include many prominent religious liberals, such as Barbara Williams-Skinner, co-convener of the National African American Clergy Network, and the Rev. Mariann Budde, bishop of Washington's Episcopal diocese.

Also signing on were a handful of evangelicals, including World Vision president emeritus Rich Stearns, who have criticized President Donald Trump despite his overwhelming popularity among white evangelical voters.

"As faithful citizens, we are praying for a peaceful, smooth, and dignified transfer of power," reads the statement, whose signatories were shared with The Associated Press ahead of their release.

"A delayed and drawn out objection on January 6th would not overturn the will of the American people and change the outcome of the election," it says.

The statement was organized by the progressive groups Vote Common Good Faith 2020, Bend the Arc, Jewish Action, and the Union Theological Seminary. Several of its prominent signatories, including Williams-Skinner and Stearns, were not among the faith leaders who publicly endorsed Biden last year.

A dozen GOP senators and scores of House Republicans are expected to reject certification of Biden's victory when Congress meets to count Electoral College votes on Wednesday.

They have cited Trump-backed claims of voter fraud, despite agreement among nonpartisan election officials and the president's recently departed attorney general that widespread voter fraud did not occur.

The anticipated objections have split the GOP and are not expected to stop Biden's ultimate certification. Biden's transition spokesman has dismissed the gambit as a "stunt."

Some well-known voices in the religious right have also amplified the claims of fraud. Last month, evangelical radio host Eric Metaxas and other religious conservatives spoke at a "Jericho March" for Trump supporters seeking to protest the election, and the same group is organizing another event this week.