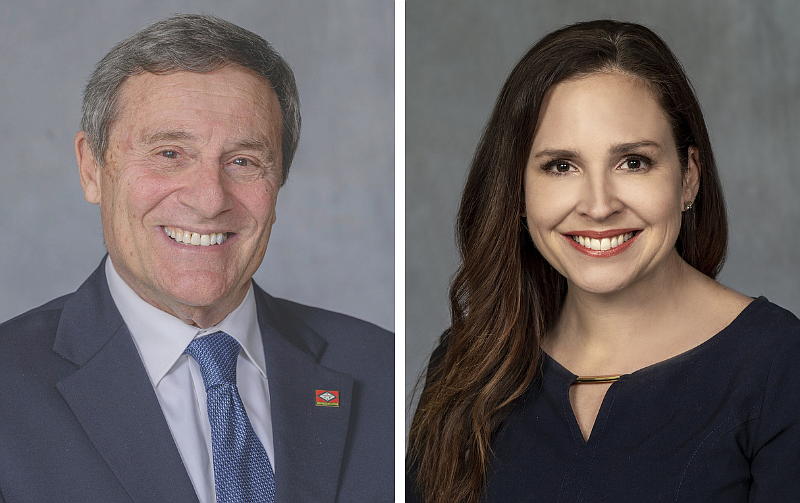 The decision is the latest in a string of legal defeats for Sorvillo, who has sought to toss out the election results in House District 32 based on the number of disputed ballots and have a new election called.

However, the ultimate decision over whether to end the dispute and seat Hudson lies with the state House of Representatives, which will convene in its regular session next week.

In a phone call Monday, Sorvillo expressed disappointment in the commission's recommendation but promised to accept whatever decision is reached by the Republican-controlled House.

"I'm not going to try to manipulate or lobby or anything," Sorvillo said.

Hudson, an attorney, praised the commission's ruling on Monday, calling it "a product of engaging an analysis of the facts and the case law."

Sorvillo's claims centered on a batch of 372 disqualified absentee ballots in Pulaski County that were accidentally mixed in with other ballots during the tabulation process.

After the mistake was discovered, the number of affected ballots in House District 32 was determined by election workers to be 32 votes, though it later narrowed to 27 by the time of Monday's hearing. Both numbers are more than Hudson's 24-vote margin of victory.

The error affected other election contests across the county, including in House District 38, where state Rep. Carlton Wing, R-North Little Rock, won reelection by 16 votes, despite 37 erroneously cast ballots being included in the results. Wing's opponent, Democrat Matthew Stallings, decided not to contest the results.

Sorvillo filed an election contest with the Claims Commission in late November after a previous lawsuit challenging the results was dismissed by a Pulaski County judge. Even as he pursued his case at the Claims Commission -- a quasi-judicial body -- Sorvillo appealed his lawsuit to the Arkansas Supreme Court. But he dropped the case before a decision was reached, only to refile a separate, but largely similar, lawsuit a week later.

After his second lawsuit was dismissed by another judge last month, Sorvillo's only remaining path to challenge the election was through the Claims Commission. In recent weeks, Commission Co-Chairman Paul Morris said the commission was presented with more than 1,700 pages of evidence and deposition transcripts related to the election.

However, Morris said Monday that Sorvillo and his attorney, A.J. Kelly, failed to provide any evidence about how the voters whose ballots were in question actually voted, making it impossible to determine whether they changed the outcome of the election.

Kelly argued that to do so would violate the voters' right to a secret ballot, while attorneys for Hudson pointed to a 2007 decision by the Arkansas Supreme Court in the case Willis v. Crumbly that said that no such right exists with regard to illegally cast ballots.

Hudson's attorney, Jennifer Waymack Standerfer, argued that the disputed absentee ballots should never have been disqualified in the first place, with some having been flagged over minor issues such as missing apartment numbers, ZIP code digits or differing signatures. Further, Standerfer argued that Hudson would have had to have won nearly every ballot in the disputed batch for it to have changed the result.

At the end of several hours of arguments Monday, Morris said he agreed with Standerfer that case law required Sorvillo's attorneys to track down the voters whose ballots were at issue to see whether they altered the outcome of the race and justified a new election.

"Mr. Sorvillo has completely failed to meet his burden of proof on this issue," Morris said. "Perhaps one of the reasons that testimony was not provided to us is because as [Standerfer] pointed out in her presentation, the math suggests that if we got that information from those voters, Mr. Sorvillo still would not be able to meet his burden of proof."

Kelly also argued a separate issue Monday regarding seven voters in House District 32 who were given ballots with the wrong House race, though Morris said the issue was raised too late in the process for the commission to consider the argument.

Morris was joined by Commissioners Henry Kinslow and Dexter Booth in voting to recommend that the House accept the results showing Hudson as the winner. All three commissioners are appointees of Republican Gov. Asa Hutchinson.

House Majority Leader Austin McCollum, R-Bentonville, addressed the commission at the end of its Zoom call on Monday, raising the possibility that the House could reach a different conclusion.

"Elections are not about probabilities," he said on the call. "It's about certainties."

After the certification of the election results, Hudson has moved ahead as the representative-elect for House District 32, participating in organizational sessions, drawing a seniority number and selecting committee assignments.

On Monday, she said she "couldn't begin to guess what that will look like" when the House takes up the matter, adding she is focused on preparing for the session.

The House is set to convene next Monday to begin its 2021 regular session. House Speaker Matthew Shepherd said Monday that he and staffers were "working through the details" about when and how the recommendation would be presented to the House.