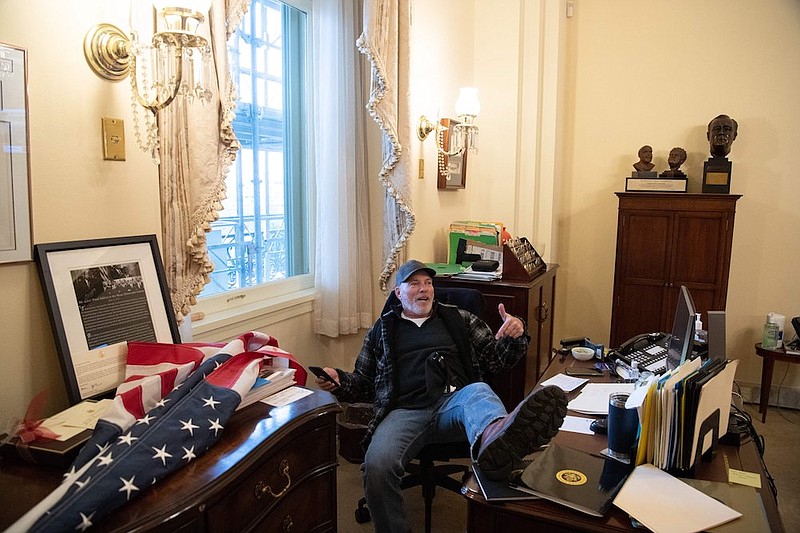 Special to the Arkansas Democrat Gazette - A supporter of U.S. President Donald Trump sits inside the office of U.S. Speaker of the House Nancy Pelosi as he protests inside the U.S. Capitol in Washington, D.C., Jan. 6, 2021. - Demonstrators breeched security and entered the Capitol as Congress debated the a 2020 presidential election Electoral Vote Certification. (Photo by SAUL LOEB/AFP via Getty Images)

Richard “Bigo” Barnett, 60, who had his picture taken while sitting in U.S. Speaker Nancy Pelosi's office after he and other protesters stormed the U.S. Capitol, is a resident of Benton County, the Gravette town mayor and his county justice of the peace confirmed Wednesday.

U.S. Capitol police were pushed aside by a swarm of supporters of President Donald Trump, temporarily disrupting the certification of the votes in which the president lost his re-election bid. President-elect Joe Biden’s inauguration takes place Jan. 20.

Gravette Mayor Kurt Maddox said Barnett is from there, but is a nearby resident, not a town citizen. Maddox said he does not know Barnett personally, but did confer with his police chief and Barnett’s home is outside city limits.

Barnett’s land is south of the town.

District 11 Justice of the Peace Dustin Todd, whose district includes Gravette and the surrounding area, also said Barnett is from the area.

“I am appalled by what I saw today,” Moehring said of the melee in Washington, D.C. “I am disheartened that it was a Benton County resident.”

Barnett is a registered voter in Benton County. His party affiliation is listed as “optional.” He voted in general elections in 2000, 2008, 2010, 2016 and 2020, according to information from the County Clerk’s Office.