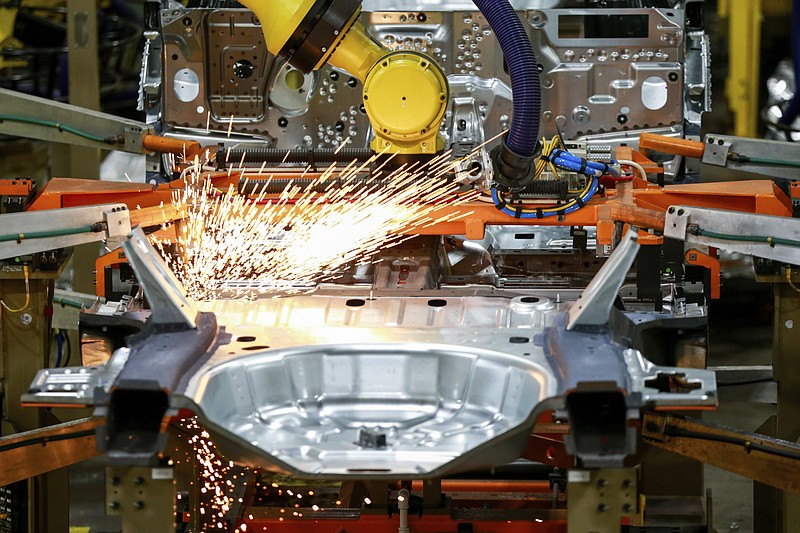 FILE - In this June 24, 2019, file photo machines work on a Ford vehicle assembly line at Ford's Chicago Assembly Plant in Chicago. American factories expanded at a faster pace last month, continuing a rebound from the coronavirus recession. The Institute for Supply Management, an association of purchasing managers, reported Tuesday, Sept. 1, 2020, that its manufacturing index climbed to 56 in August from 54.2 in July. (AP Photo/Amr Alfiky, File)

WASHINGTON -- American factories grew in December at the fastest pace in more than two years as manufacturing continued to weather the pandemic better than the battered services sector.

The Institute for Supply Management reported Tuesday that its gauge of manufacturing activity rose to 60.7% last month, the highest reading since it stood at 60.8 in August 2018. The gauge was up 3.2 percentage points from a November level of 57.5.

Any reading above 50 indicates expansion in the manufacturing sector.

The U.S. economy collapsed from April through June but since that time manufacturing has posted solid gains, while the services sector, which includes restaurants, bars and the travel industry, has been harder hit.

General Motors reported Tuesday that sales jumped 5% in the final quarter of 2020, its best fourth-quarter performance in retail sales since 2007 with deliveries up 12%. Toyota, which has U.S. plants in Georgetown, Ky.; Blue Springs, Miss.; San Antonio, Texas and elsewhere, said sales spiked 20% in December.

While manufacturing has recovered since spring, Timothy Fiore, chairman of the institute's manufacturing committee, said that it continues to face virus-related headwinds such as factory shutdowns needed to sanitize facilities and difficulties in hiring new workers as the virus again surges in the U.S.

Ford's factories are running at about 98% of capacity by using temporary workers as backups for employees who stay home because of virus exposure or symptoms, said Gary Johnson, Ford's chief manufacturing officer. Like other automakers, Ford has also had temporary production interruptions because of parts shortages from supply companies whose plants have been hit by the virus.

Rubeela Farooqi, chief U.S. economist at High Frequency Economics, said activity at U.S. factories in coming months would be exposed to "broadening containment measures that could disrupt and weigh on demand in the U.S. and abroad."

GM said its retail sales to individual buyers began to recover in May and reached pre-pandemic levels during the fourth quarter. Fleet sales are still down sharply, especially to rental car companies.

The worry is that a resurgent virus could hit manufacturers where they have been thriving.