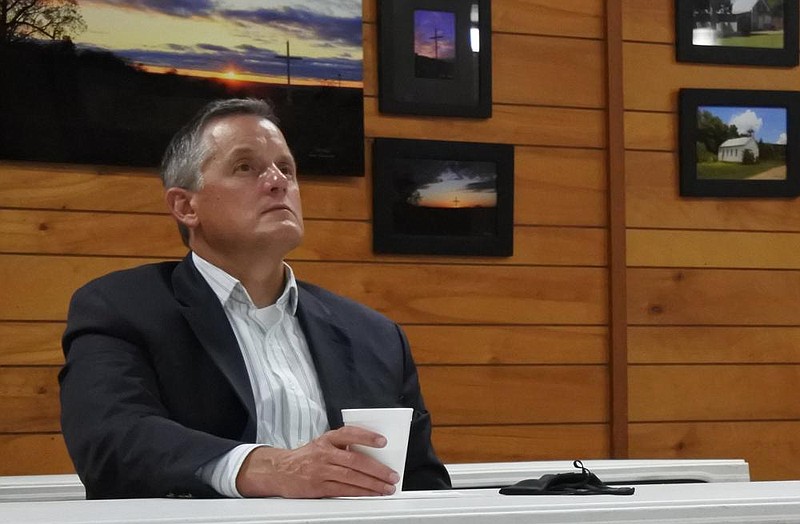 FILE - U.S. Rep. Bruce Westerman listens to a presentation at the Mulberry Community Center in this Aug. 31 photo. Westerman signed an amicus brief supporting a lawsuit filed in the U.S. Supreme Court by Texas Attorney General Ken Paxton seeking to throw out the results of the presidential election in four states. (Arkansas Democrat-Gazette/Thomas Saccente)

Congressman Bruce Westerman is considering whether to join as many as 140 other Republican members of Congress today in objecting to the outcome of the 2020 presidential election, but he wasn't saying Tuesday if he'd made up his mind, according to a staff member.

Rebekah Hoshiko, press secretary for Westerman, whose 4th District includes Pine Bluff, said the congressman had been getting an abundance of phone calls from constituents on the subject.

"We are getting flooded," she said Tuesday. "Far more than on any other issues other than possibly the 2019 shutdown and a few other high water moments. It's a high, high volume of calls."

Hoshiko said calls are coming in on both sides of the political spectrum but that the "vast majority are not for certifying the election" because of a concern over voter fraud.

President Donald Trump has, without any evidence, alleged for weeks that his loss to President-elect Joe Biden was because of election fraud. But his own attorney general, William Barr, said before resigning recently that his office had not detected any widespread voter fraud. And Christopher Krebs, Trump's own election security director, said before Trump fired him that the election was the "most secure in American history."

Still, at Trump's urging -- and because many Americans believe there was fraud -- many Republican members of the House and a dozen or so Republican senators are ready to object to the election results.

Hoshiko said Westerman does not take lightly the views of those constituents who do believe there was fraud, but she said the congressman was "balancing his responsibility to his constituents with his personal convictions and his duty to the Constitution" as he makes up his mind whether to join his colleagues in objecting to the vote.

She said it is "very standard practice" for Westerman not to reveal how he will vote on any given subject until it is time for him to vote.

"Don't count your chickens before they hatch," Hoshiko said, adding that Westerman wants "to see what happens tomorrow" and see how many other members actually object to the Electoral College vote count. "We're not trying to stonewall you on this."

Hoshiko said Westerman would issue an official statement today on the subject.

The Republican objections to the presidential vote results, while not considered a threat to Biden taking the oath of office on Jan 20, are said to be harmful to one of the hallmarks of the nation's democracy, that being a peaceful transfer of power, which has been happening since 1797, when George Washington stepped down from power.

Westerman was one of 106 Republicans who signed on to a "friend of the court" brief in December in support of a lawsuit filed by Texas Attorney General Ken Paxton seeking to throw out the results of the presidential election in four battleground states that Biden won. That lawsuit was rejected by the U.S. Supreme Court.

Westerman told The Commercial at that time that the Texas case was the "best and likely last opportunity" for the court to hear such claims of fraud and that Americans should soon "come together."