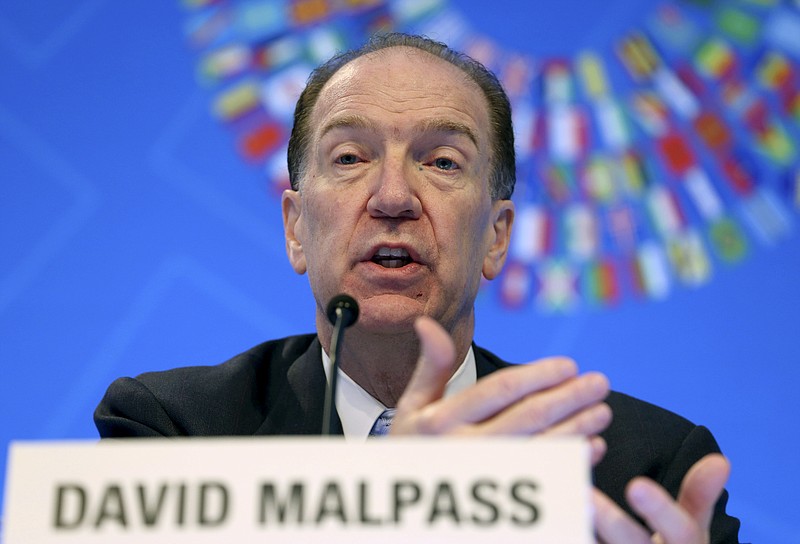 FILE - In this Oct. 17, 2019 file photo, World Bank President David Malpass speaks during a news conference at the World Bank/IMF Annual Meetings in Washington. The World Bank on Tuesday, Jan. 5, 2021 forecast that the global economy will see a subdued recovery this year from a devastating pandemic but warned that the near-term outlook is highly uncertain and growth could be harmed if infections keep rising and the rollout of vaccines is delayed.(AP Photo/Jose Luis Magana, File)

WASHINGTON -- The global economy this year will experience a subdued recovery from the pandemic, the World Bank predicted Tuesday, but it warned that the near-term outlook is highly uncertain and that growth could be imperiled if coronavirus infections keep rising and delays in the rollout of vaccines continue.

In its new Global Economic Outlook, the World Bank forecast 4% growth this year after a 4.3% decline in 2020, the biggest plunge in global output since a contraction of 9.8% in 1945 as nations demobilized at the end of World War II.

"If history is any guide, the global economy is heading for a decade of growth disappointments unless policy makers put in place comprehensive reforms," the World Bank warned, citing the pandemic layered over economic trends already in play.

Global debt rose by more than $15 trillion last year to a record $277 trillion, equivalent to 365% of world output, according to the Institute of International Finance. Debt from all sectors -- including households, governments and corporate bonds -- surged, based on data from the Washington-based institute, which comprises the world's leading financial institutions.

The World Bank said global growth will be aided this year by the world's two biggest economies, with gross domestic product growth of 3.5% in the United States and an even bigger 7.9% rebound in China.

Because of the uncertainty caused by the current resurgence in virus cases and initial problems in distributing vaccines, the World Bank cautioned that its forecast is also highly uncertain.

Under a scenario in which virus cases continue to rise and the rollout of the vaccine does not accelerate, global growth could be reduced to a meager 1.6% this year.

The new report boosted global growth for 2020 by 0.9 percentage points from its June forecast, reflecting in part a better-than-expected performance in China and the United States. But the forecast trimmed the outlook for 2021 by 0.2 percentage points.

To combat the sharp downturn seen in 2020, the World Bank has made $160 billion available to help more than 100 countries protect the poor, support businesses and bolster the recovery.

Malpass, in a briefing for reporters, said the World Bank was making available $12 billion to provide for 1 billion covid-19 vaccinations in poor countries.

"People at the bottom of the income scale were hardest hit by the shutdowns and recession and will most likely be the slowest to regain jobs and get vaccinations," Malpass said.

In the U.S., Black and Hispanic people have proportionately suffered more fatalities than white people, while low-wage workers in such industries as leisure and hospitality have borne the brunt of layoffs as those better off continue to work from home.

"The pandemic has exposed the depth of inequality and in many ways has exacerbated those inequalities," said Joseph Stiglitz, a Nobel Prize-winning economist.

While rich countries such as the United States have cushioned the blow to their citizens with large amounts of government aid, poorer nations have been unable to do that. Stiglitz, a Columbia University professor, said the world's 46 least-developed nations accounted for 0.002% of the $12.7 trillion in public stimulus spending laid out in the fight against the virus.

"In many ways, we could see after this pandemic an unwinding of decades of progress toward reducing global inequality," said Harvard University professor and former International Monetary Fund chief economist Kenneth Rogoff.

Information for this article was contributed by Martin Crutsinger of The Associated Press and by Rich Miller of Bloomberg News (WPNS).