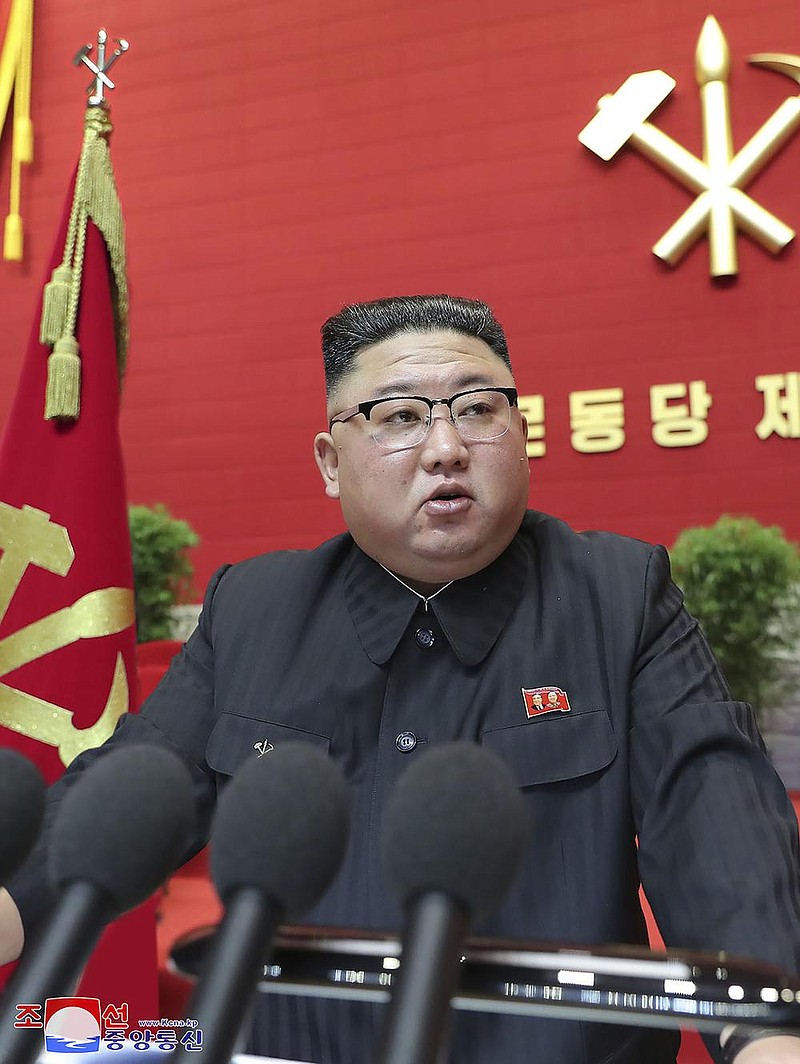 North Korean leader Kim Jong Un speaks Tuesday at a ruling party congress in Pyongyang in this photo, which could not be independently verified. (AP/Korean Central News Agency/Korea News Service)

SEOUL, South Korea -- North Korea's leader, Kim Jong Un, admitted Tuesday that his efforts to rebuild the country's moribund economy have failed, as he opened his country's biggest political event amid deepening economic trouble caused by the one-two punch of international sanctions and the coronavirus pandemic.

"Our five-year economic development plan has fallen greatly short of its goals in almost all sectors," Kim said in his opening speech to the ruling Workers' Party's eighth congress that began in Pyongyang, the capital, on Tuesday. Kim said his country had been struggling with "a series of the worst of worst unprecedented crises."

The text of his speech was carried by the North's official Korean Central News Agency on Wednesday morning.

The congress was expected to last for a few days to adopt a new five-year economic plan and reshuffle party leadership.

When North Korea held its previous party congress in 2016, it was the first such gathering in 36 years and was Kim's major coming-out event as leader. There, he adopted his ambitious five-year goals, promising to build a "great socialist country" by 2020 that would have both a nuclear arsenal and a growing economy.

But things have not transpired as Kim had hoped.

Since taking over his country after the 2011 death of his father and predecessor, Kim Jong Il, Kim has accelerated his country's nuclear weapons and missile programs. North Korea has conducted the past four of its six underground nuclear tests under Kim. It flight-tested three intercontinental ballistics in 2017.

But the U.N. Security Council responded by imposing tough economic sanctions, which banned coal, iron ore, textiles and other major exports of North Korea. As the stranglehold tightened, the North's economy shrank by 3.5% in 2017, according to estimates by South Korea's central bank. It contracted by 4.1% the next year, with its exports to China, North Korea's only major trading partner, plummeting by as much as 86%.

Kim started diplomacy with President Donald Trump in 2018, desperate to get the sanctions lifted in return for a partial dismantling of his nuclear facilities. But his three meetings with Trump failed to produce a breakthrough.

In his New Year's message 12 months ago, Kim sounded defiant, saying that his country would slog through the sanctions and build a "self-reliant" economy, even if that meant that his long-suffering people would have to "tighten our belts" again. He vowed to boost the nuclear weapons program further, threatening to end his moratorium on nuclear and long-range missile tests. He said North Korea would unveil a "new strategic weapon" soon and "shift to a shocking actual action."

Soon afterward, however, North Korea was hit by the pandemic, which forced the country to close borders with China. Then came extensive flood damage. After rebounding slightly in 2019, the North's economy plummeted again last year. According to data released by the Chinese government, North Korea's imports from China from January to October last year shrank by 76% to $487 million, while its exports shrank by 74% to $45 million in the same period.

When Kim presided over the national celebrations for the ruling Workers' Party's 75th anniversary Oct. 10, he showed off what appeared to be its largest-ever intercontinental ballistic missile during a rare nighttime military parade in Pyongyang.

But he had little to show on the economic front. He apologized to his people for failing to live up to their expectations. "I am really sorry for that," he said, appearing to fight back tears. "My efforts and sincerity have not been sufficient enough to rid our people of the difficulties in their life."

The party congress is being closely watched by outside analysts for clues on how Kim may calibrate his policy toward Washington under the incoming Biden administration.

Since his diplomacy with Trump collapsed, Kim has refrained from resuming nuclear or long-range missile tests. He appeared to wait out the November election in the United States, deciding not to provoke Trump, who has repeatedly touted his special "personal relationship" with the North Korean dictator.

But the display of a new ICBM in October also was designed to demonstrate the North's growing military threat and press whoever won the U.S. election to make concessions to North Korea, analysts said.