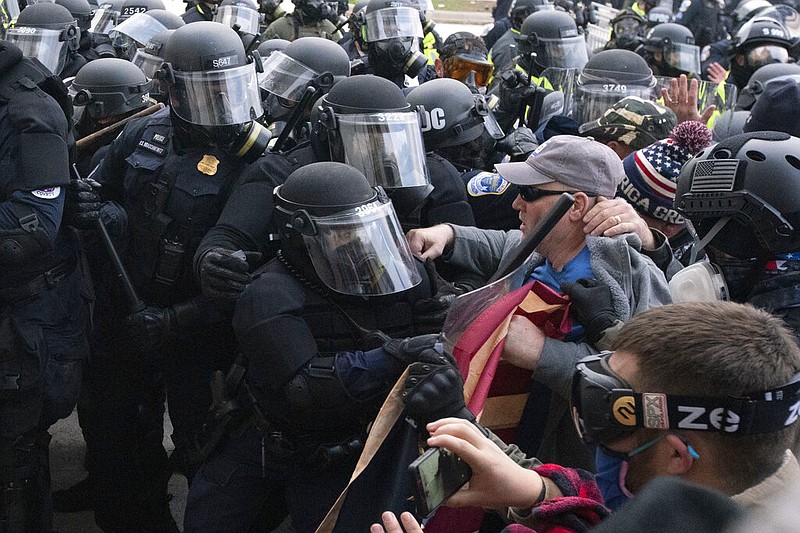 Capitol police officers in riot gear push back demonstrators who are trying to break a door of the U.S. Capitol in Washington on Wednesday, Jan. 6, 2021. (AP / Jose Luis Magana )

Local and state leaders said they were shocked at what transpired in the nation's capital on Wednesday, but several said they were not surprised, given President Donald Trump's steady stream of assertions that the election had been stolen from him.

As lawmakers inside the U.S. Capitol debated the certification of the presidential election on Wednesday, Trump's supporters were able to breach security and go inside, leading to the deployment of police. Eventually, after a few hours of destruction and shots fired inside the Capitol, which killed a woman, agents from the FBI and the Bureau of Alcohol, Tobacco, Firearms and Explosives as well as the National Guard were deployed to secure the Capitol.

Trump, who took the stage earlier in the day in front of his supporters who were there to protest what was going on inside the Capitol, stated he had won the election. The fired-up protesters surged toward the Capitol, some of whom were recorded breaking windows and climbing inside. Some made it to an area from where lawmakers had just been led away.

Trump later released statements asking the protesters to go home in peace, but much of the damage already had been done by then. What looked like a Hollywood movie production became a sad news commentary for the United States of America, which had city, county and state leaders reacting to the unlawful behavior.

As Rep. Vivian Flowers, D-Pine Bluff, watched the news during the early hours of the protest Wednesday afternoon, she said she was shocked to see the horrific scene but not at all surprised.

"I'm looking right now at a mob chasing a Capitol police officer in the nation's capital," she said. "The behavior, the rhetoric, the lawlessness, the lack of respect for our democracy, has been something that has been right in the rhetoric and the behavior of the president and his administration for four years."

Flowers said the half-truths, lies and rhetoric used by Trump to stir up his base is something she has seen displayed since his presidential term began.

"People have been shouting violently the statements and beliefs that would naturally lead to this," said Flowers. "I'm not against protesting, even if they were protesting against a democratic process, but to storm the Capitol, to attack people, including law enforcement, to destroy the property in our nation's Capitol is horrific, but consistent with the behavior of the president."

What wasn't consistent during the live viewing of the protesting was the police presence. As nationwide protests have been part of the landscape of 2020 from the Black Lives Matter movement, an integral part of those protests has been a significant police presence. But as viewers watched protesters swarm inside the Capitol building, it was approximately three hours before help arrived from other agencies. Eventually, 1,750 National Guard troops were deployed.

As community activist Kymara Seals, who said she is committed to social and economic justice, watched, she was overcome with anger.

"I am mad as hell," said Seals, who was triggered by the scenes she described as horrendous. "If these were Black Lives Matter protesters, officers would be everywhere with tear gas, you would see armored vehicles, you would see police dogs, rubber bullets and bloodshed."

Seals added there is clearly a double standard of policing in the nation as she recalled a peaceful Black Lives Matter protest in Little Rock where police snipers were on the roof. "It was not threatening, it was not violent, we were nowhere near like these Trump supporters and they put snipers on the roof," she said. "They have taken over the nation's Capitol and they were allowed to do that and that's a shame."

Pine Bluff Mayor Shirley Washington said it was sad to see that so many people had lost respect for the election process. "We live in a democratic society where we have not always agreed with election results," she said. "However, it is part of our tradition to respect such outcomes. Our hope is that decency and order will prevail."

While Sen. Trent Garner, R-El Dorado, said he doesn't condone violence, he said he understands the reason behind it.

When asked about the behavior compared to the Black Lives Matter movement, Garner said while ideologically they are different, in both cases people are being ignored and frustrated.

"The vast majority of people in the movements are good people, but there's always a few that riot in violence," Garner said. "We've had months and months of rioting, businesses destroyed, people being shot, and some of the outcries from that have been pained compared to the outcry we are seeing in Washington, D.C. In both cases, we should follow the law, but I think when you drive people to the edge, they respond."

For some leaders, the response to what some feel should be a gracious act of defeat has turned into a "sore loser" mentality.

"It's easier for you to accept the election and live in the greatest country in the world," said City Council Member Glen Brown Sr. "We have people who don't want to accept the results of the election, and in the end, we are acting as if we are a foreign country."

"It's ridiculous when all they are not doing is accepting a constitution in government," Brown continued. "Trump came out and spoke to the people by saying, "go home peacefully" but regurgitated out of his mouth 'there's nothing but election lies,' and to me, that's putting water on the front part of the fire and gas on the back end."

Council member Steven Mays agreed, adding that Trump needs to respect the fact that he lost the race in November and he needs to tell his supporters to back up and respect the votes of the citizens of the United States.

Mays said Trump is causing unnecessary confusion, which can affect everyone down to the local level of government. "Our country is a peaceful place and a lot of unnecessary things go on most of the time as far as politics, but President Trump needs to say that he lost the race," said Mays. "On Jan. 20th, he needs to pass the power and authority over to President [Joe] Biden and VP [Kamala] Harris."

Jefferson County Judge Gerald Robinson weighed in with his thoughts, saying he believes Wednesday's protests will make the United States the laughingstock of the world.

"I never thought I would see something like this in my lifetime as an American," said Robinson, who said Trump's action to invoke a riot was shameful and undemocratic. "This radical mentality is unacceptable for any American to be involved in."

Council member Joni Alexander said those who are responsible for Wednesday's events must be held accountable and accept responsibility.

"This is the collateral damage of putting self, party and ignorance over country," said Alexander, who said she will be praying that order is restored.

The Rev. Jesse C. Turner said the answer is and has always been Jesus Christ.

"We as a nation need to call on God as we should for the [covid-19] vaccine, praying for this president that God would intervene and not be disrespectful, fighting others, creating a more volatile situation," he said. "We have walked away from those things that will bring peace, and we have other entities that were leading people into hatred, leading folks to disrespect as opposed to saying this is not the way we are supposed to do that."

Turner said this presidency has invoked racism and has energized white supremacy and other inflammatory behaviors and that they are tearing America apart from the inside out.

"This nation is too strong to be destroyed from any outside force. We are too powerful," said Turner. "The only way that America will be destroyed is from the people in the inside."

The bottom line is that if the United States of America cannot come back to the religious tenet we know as Jesus Christ, according to Turner, then there is no hope.