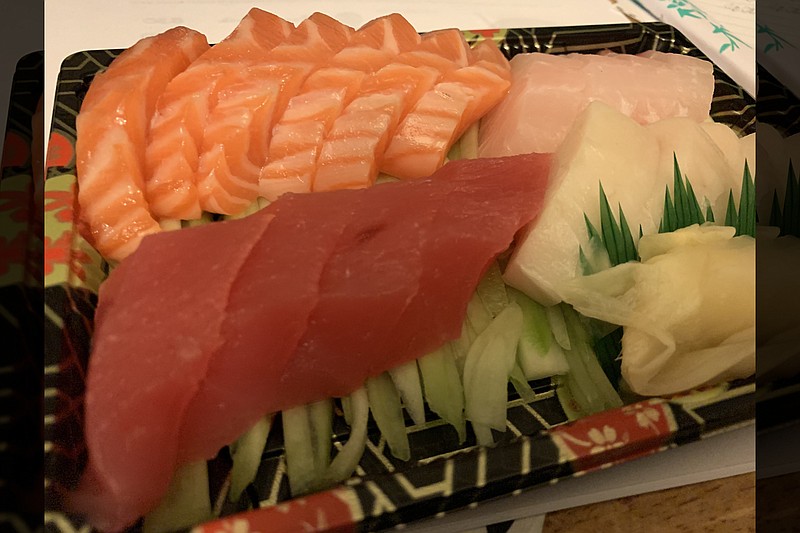 It’s a new year, but the same old pandemic.

Which is why, especially with Arkansas’ recent record-setting spikes in covid-19 cases and hospitalizations, out of an abundance of caution, we remain resolved to not yet resume dining in and to continue taking out.

We’re applying the same rules that weighed down and bolstered this column in months past: We’re continuing to avoid chains (at least until we run out of locally owned establishments, which we encourage all to continue to support), we’re sticking to a reasonable “trying to keep food hot” radius and we pay for our meals.

Tokyo House has been offering one of the area’s most elaborate buffets that includes a sushi bar, so it has been a long, long time since we even thought about trying to order off their menu, much less get an order to go. (It’s been so long since they printed their to-go menu that the map on the front still shows as across-the-street neighbors Cozymel’s Mexican Grill, which closed in 2012 and was replaced, after a long vacancy, in 2014 by Twin Peaks, and Macaroni Grill, which closed at the end of January 2018 and remains vacant.)

Notwithstanding, our to-go dinner turned out pretty well. The highlight was our Tuna Tatarki, which most places spell as “tataki”: chunks of lightly seared ahi tuna in a tongue-tingling red-chile ponzu sauce garnished with tobiko (flying fish roe) and white and black sesame seeds on a bed of vertically thin-sliced cucumber. There wasn’t anything particularly special about our sashimi — thick-cut slices of tuna, salmon, red snapper and “super white tuna” (escolar) — but it was fresh and a comparative bargain. Our six pan-fried shrimp shumai (steamed is also an option), with a plastic cup of soy-garlic sauce for dipping, were fine but unimpressive.

HOW IT WENT: We ordered at the front desk, which also doubles as the cashier, and it took about 15 minutes, about what we were promised. However, we spent that on a padded bench a little too close to the door for our comfort (it was cold, and incoming customers, including a party of 10, were packed into the small entryway not entirely socially distancing from employees or waiting to-go patrons).

HOW IT’S GOING: The entire restaurant is open, with reduced capacity, and it was busy. There were no other to-go orders pending. 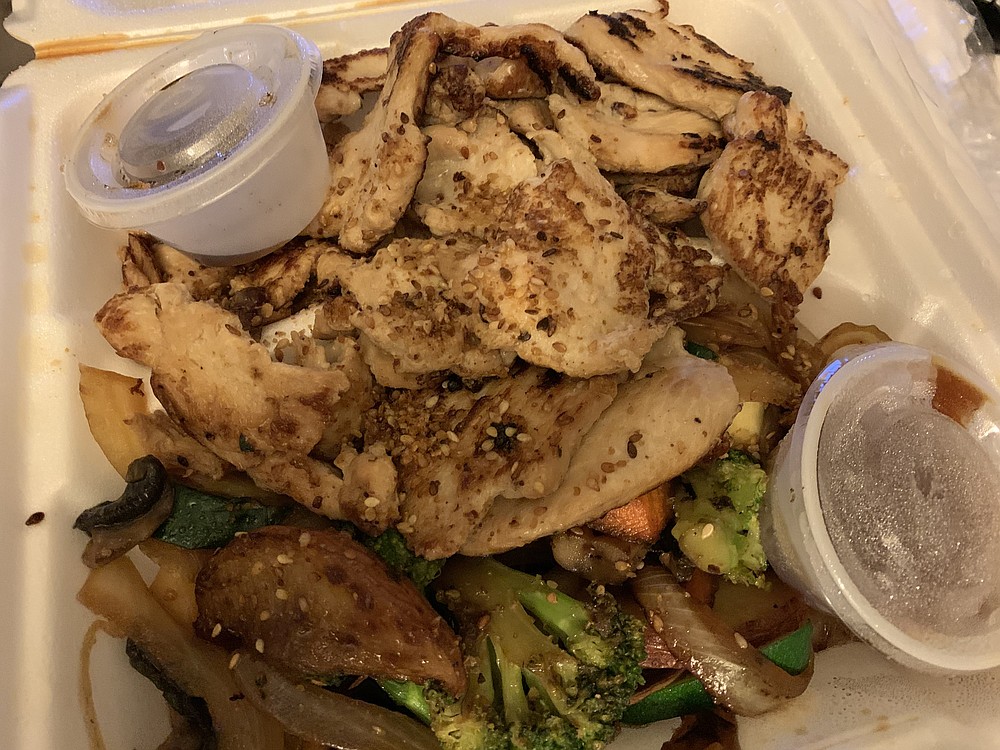 Kamikaito had been closed for awhile last fall and we only recently discovered it had reopened. We ordered an appetizer and an entree because we were hungry, but the appetizer was big enough to be an entree and the entree was enormous enough to provide leftovers for lunch.

Our chicken was in large flat pieces instead of chopped chunks, and in a sauce that kept it outstandingly (and surprisingly) tender and moist, all highly unusual for being cooked on a flat hibachi grill. There was a big side portion of grilled/sauteed vegetables including broccoli, carrots, onions, zucchini, mushrooms and what appears to have been slices of potato. We were expecting about half the number of medium-size batter-fried shrimp in our appetizer; it was all coated in a slightly spicy honey-based sauce with some extra sauce in a plastic cup in case we didn’t think there was enough. The soup was a little bitter but it was a nice opener on a cold wintry night.

HOW IT WENT: We ordered at the bar and waited about 15 minutes for our food.

HOW IT’S GOING: The gelato bar that was promised is now an integral part of the front of the restaurant, something that will eventually induce us to return. Several socially distanced tables were occupied and there was one other to-go order. 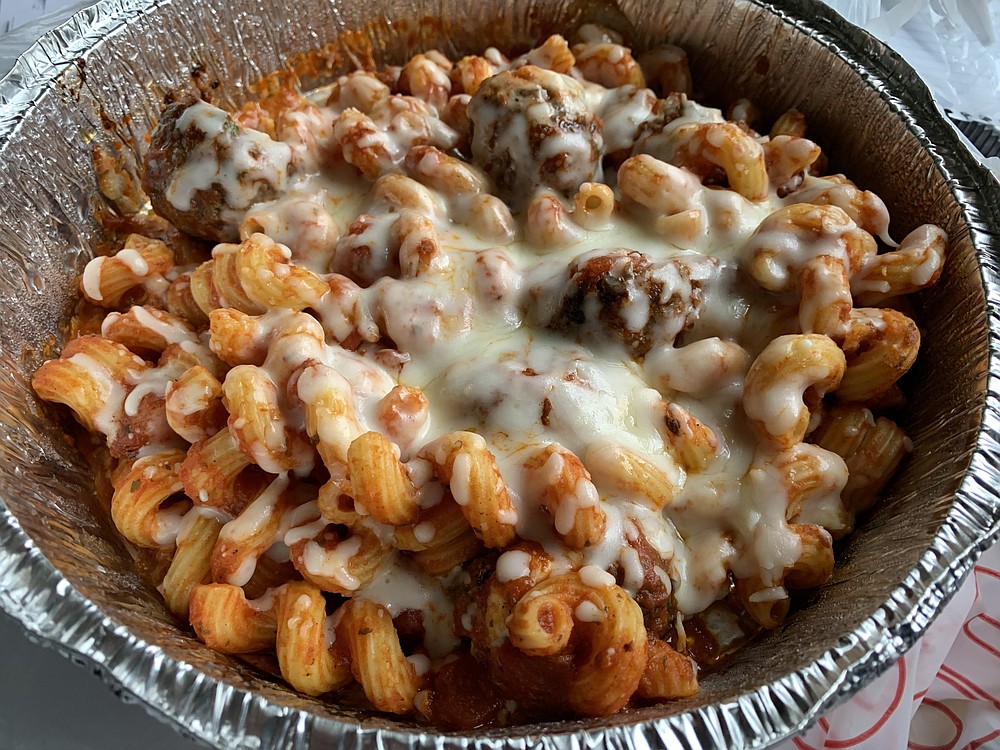 We had a hard time choosing out of Brewski’s upscale pub-grub menu, getting down to the very bottom before we landed on the cavatappi pasta (thicker than macaroni with a slight corkscrew shape), topped with marinara, a layer of mozzarella and cheese-filled meatballs. This certainly isn’t a usual pub-grub menu item and at first we congratulated ourselves on the choice, but the marinara ceased to thrill after we got about half way into the dish. The kitchen was generous with the slightly spongy meatballs — after a few, the cheese-filled part wasn’t so thrilling either. It comes with a couple of triangular slices of modestly toasted and decently garlicky garlic bread.

HOW IT WENT: We ordered over the phone and paid in person; we were lucky at lunch to find a parking place right across the street, but with six restaurants on that block, you’re not likely to find anything within a block or two. Curbside handover is available.

HOW IT’S GOING: We heard, but didn’t see, dine-in customers. There were no other to-go orders pending. 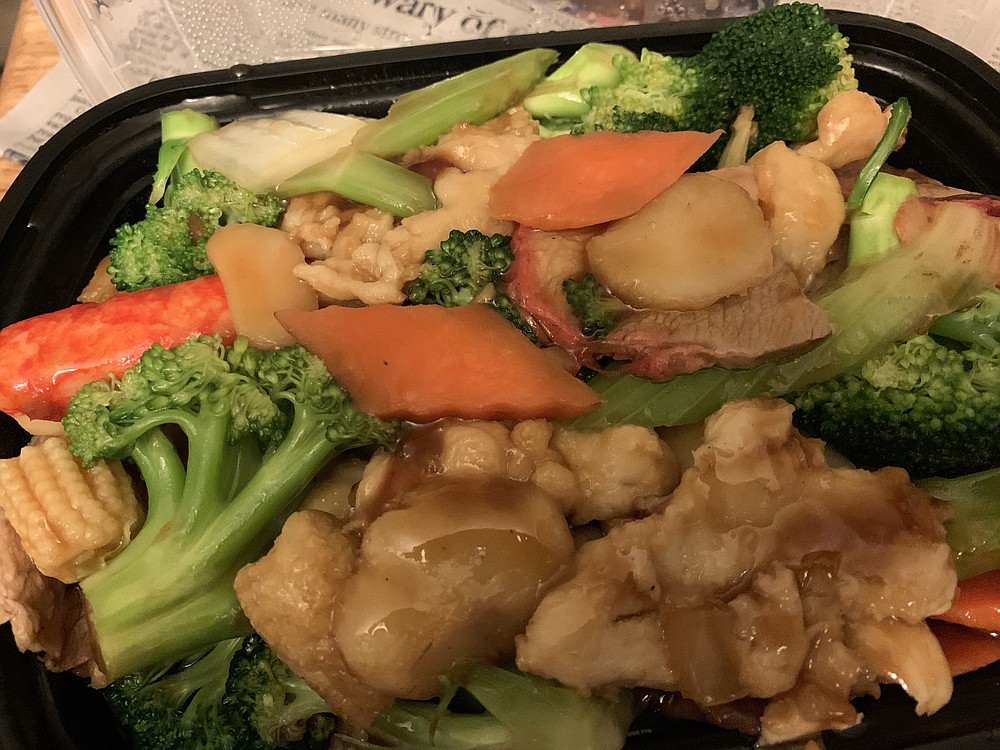 Panda Garden focuses heavily on its broad-scaled buffet; we recall thinking about ordering something, possibly to-go, off the menu when we initially reviewed the place way back in 2008, but a quick look-back at that review shows we didn’t.

Happy Family is a popular dish for Chinese New Year, a melange of wok-sauteed chicken, beef, pork, shrimp and in this case, surimi (quasi-crab, not listed on the menu) with mixed vegetables (broccoli, carrots, cabbage, celery, water chestnuts, baby corn) in a rich brown sauce. This sauce was particularly rich and we sopped up the remainder at the bottom of the plastic to-go plate with some of the steamed white rice. It was a huge portion, too. The soup, which apparently was prepared to order, is very similar to what we’ve ladled out of the tureen on the to-go line: glutinous, not especially hot or sour, but chock full of chewy things, including tofu and bamboo shoots. In this case, we also got a generous floating top layer of mushrooms.

HOW IT WENT: There’s an online ordering system but we were having internet connectivity problems so we ventured to the restaurant and ordered and paid at the front desk/hostess station/cashier. We were told 15-18 minutes, and got our food in closer to 15 than 18. Turns out that what we were waiting for the longest was the soup.

HOW IT’S GOING: The restaurant was busy on a Sunday night, with a steady stream of incoming dine-in customers the entire time we waited, and at least four other to-go orders ahead of ours. At least one-third of the tables were occupied.