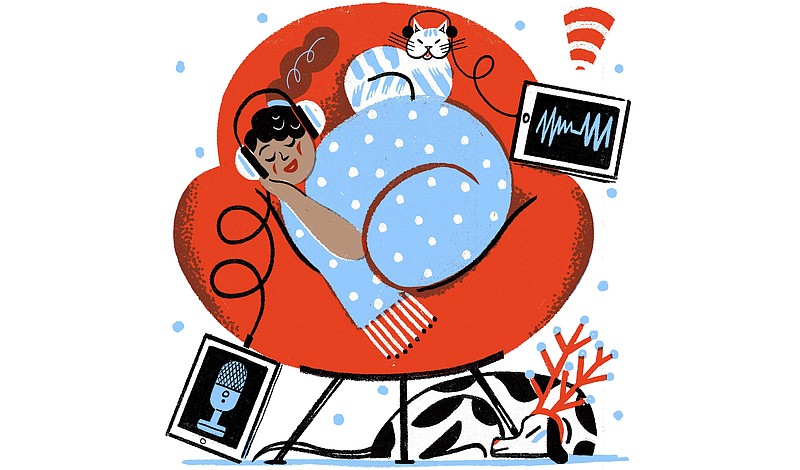 It's time to bid goodbye and good riddance to 2020, one of the worst years most of us have ever lived through. Though the end of the pandemic is in sight, this season remains a lonely, difficult one, with renewed lockdowns keeping many separated from their loved ones, their communities and their traditions.

If you're feeling unmoored, or just burned out from the past year, these podcasts will keep you company and help you feel connected, even in isolation.

◼️ "Beautiful Stories From Anonymous People": The premise of Chris Gethard's innovative interview show is deceptively simple, rooted in the comedian's many years in talk radio. Each week, Gethard has a phone conversation with one anonymous caller, whom he'll speak to for an hour about any subject the person chooses. When the show began in 2016, Gethard figured the end result would be a mostly comedic series of prank calls; instead, it's a remarkably intimate series of confessionals. Some calls do offer fun slice-of-life musings, but others are bracingly intense — a recent caller revealed she had barely slept all week after discovering that a close friend had murdered someone. Empathetic and thrillingly unpredictable, "Beautiful Stories" makes ordinary life as captivating as any scripted drama. (Starter episode: "Love in the Time of Coronavirus")

◼️ "This Is Love": After four years of telling engrossing, disturbing stories about the worst of humanity in the hypnotic true crime podcast "Criminal," Phoebe Judge and her colleagues in 2018 began applying the same rigor and nuance to telling stories about love. As warm as "Criminal" is chilly, the offshoot podcast, aptly called "This Is Love," explores its central concept through wide-ranging narratives that are sometimes about romance but sometimes about subtler kinds of love. One episode details the bond between a blind man and his guide dog; another, the extraordinary saga of two wolves at Yellowstone; another, the story of a dive team venturing inside an iceberg. Other episodes explore acts of collective love, like the Italian city that voluntarily fell silent to preserve the sound of a treasured violin. A soothing and inspiring counterweight to doomscrolling. (Starter episode: "Roselle and Michael")

◼️ "Griefcast": This year has been full of grief in different forms: for those who have died of the coronavirus, for the industries that have been decimated and for life as we know it. For anyone grappling with loss, "Griefcast" is a cathartic listen. The host, Cariad Lloyd, lost her father to pancreatic cancer at 15 and for many years was unable to express the effect it had on her. That experience inspired her to create a show that's all about speaking the unspeakable. Lloyd sits down with fellow comedians and performers to "talk, share, and laugh about the weirdness of grief and death." Blending gallows humor and searing compassion, the show cuts through the isolating haze that often makes grief unbearable. (Starter episode: "Aisling Bea")

◼️ "Stuff You Should Know": There's no shortage of "explainer" podcasts that play like a kind of audio encyclopedia, delivering 101 summaries on a variety of topics. But the appeal of "Stuff You Should Know," one of many shows from the prolific HowStuffWorks brand, lies mainly in the amiable and genuine rapport between co-hosts Josh Clark and Chuck Bryant. Each week, the duo delve into the inner workings of subjects as varied as sneezing, Black cowboys and the Bay of Pigs disaster, peppering their curious conversations with pop culture references, life anecdotes and the odd dad joke. Even in episodes that explore unsolved mysteries like the disappearance of Malaysia Airlines Flight 370 or the Dyatlov Pass incident, the tone is always level headed. A down-to-earth treat that'll also teach you something. (Starter episode: "The Disappearance of Flight MH370")

◼️ "Comedy Bang Bang: The Podcast": Laughter is a scientifically backed antidote to the stress and anxiety, and with live comedy still out of reach for the foreseeable future, listening to this long-running podcast can prove a helpful coping mechanism. Having started life as a radio show in 2009, "Comedy Bang Bang" has evolved into a podcasting institution whose enduring appeal is rooted in its deliberately unpredictable format. Each week, Scott Aukerman welcomes comedians and celebrities for what are ostensibly interviews, but quickly descend into a surreal blend of character skits and improv segments. Regular guests include Paul F. Tompkins, Jason Mantzoukas and Lauren Lapkus, whose long-standing rapport with Aukerman helps the show feel grounded, even in its most absurdist moments. (Starter episode: "Small Claims Cyborg")

◼️ "This American Life": This beloved titan of audio journalism celebrated its 25th anniversary this year and marked the occasion by rebroadcasting some of its most memorable episodes. The reruns were a reminder of just how timeless the show is, illuminating different nooks and crannies of the American experience and drawing unexpected lines between them. Anchored by Ira Glass' inimitable wry, halting voice, each episode — usually a prologue and three acts — introduces a central theme that is explored through different types of nonfiction storytelling, including reportage, monologue and verse. "This American Life" (which now has a "creative and strategic" relationship with The New York Times) is not a news show, but it excels at taking a timely story and boiling it down to an essential theme. One recent example was the election-theme episode "Personal Recount," which explored different scenarios in which people changed their minds. (Starter episode: "129 Cars")

◼️ "Kind World": It's no secret that bad news travels faster (and farther) than good news, and as its title suggests, this show from Boston-based WBUR is all about redressing the balance. Each episode of "Kind World" focuses on an instance of human decency — an act of charity, a chance encounter that sparks a connection, somebody going above and beyond for their community. As lockdowns descended in the spring, the show ran a series of bite-size episodes titled "A Moment of Kindness," in which listeners nationwide called in to share their own memories of everyday empathy. The podcast officially wrapped up in the summer, but the back catalog has enough life-affirming gems to keep your faith in humanity strong for months. (Starter episode: "Glimmers of Light Amid Darkness")