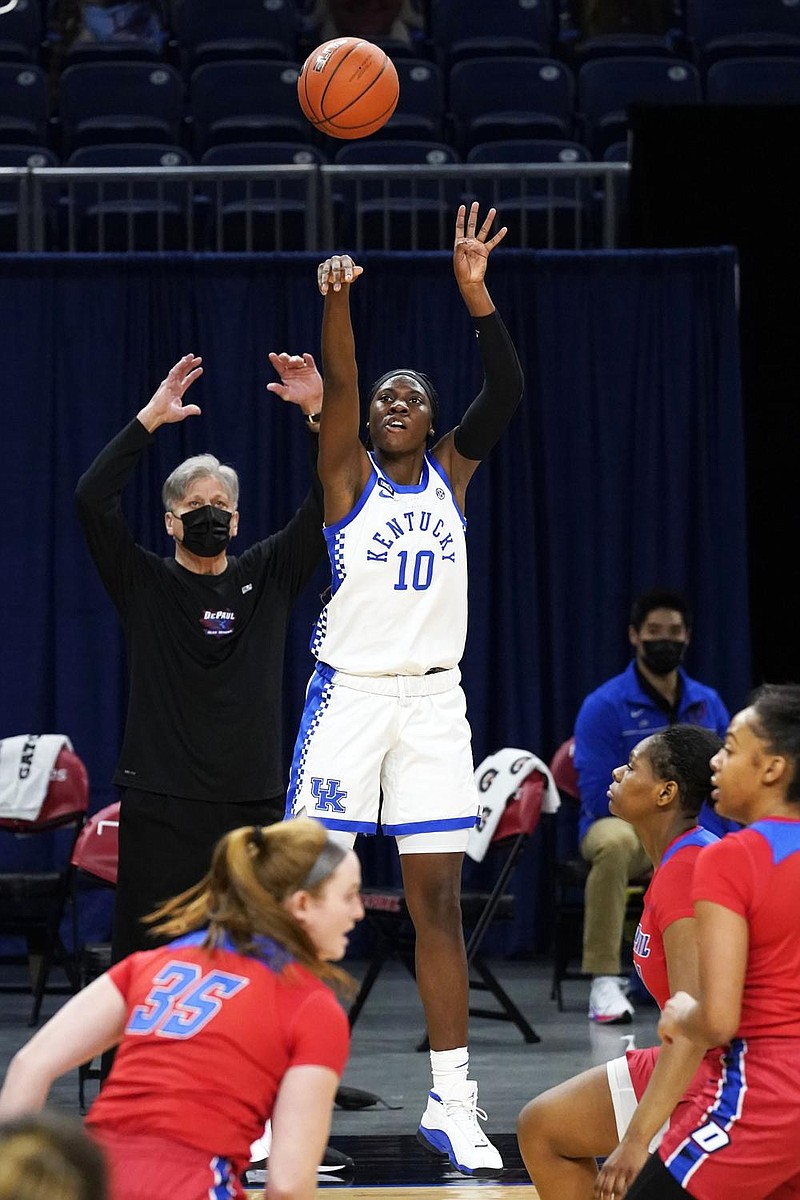 Kentucky guard Rhyne Howard, shown in a game against DePaul last month, had a double-double against Arkansas to start SEC play, then scored 25 of the Wildcats’ final 31 points in an overtime victory over Mississippi State. (AP/Nam Y. Huh)

No. 10 Kentucky started SEC play with a bang, picking up back-to-back wins over top 15 opponents.

It was the first time since December 2013 that Kentucky had defeated top-15 opponents consecutively, and the first time ever that UK had accomplished the feat against SEC opponents.

The Wildcats did it with defense against Arkansas, holding the Razorbacks to a season-low 64 points. It was all about the offense against Mississippi State.

Kentucky Coach Kyra Elzy said in her Tuesday news conference that it came down to players coming up with key plays, especially against Mississippi State on the road when the Bulldogs scored the first four points of overtime.

"What I learned about this team is they are tough and resilient," Elzy said. "Not all the calls went our way. We missed some layups. So there were times in that game where we could have folded. But we hung in there. We faced adversity, and we just had players make big play after big play after big play when we had to have it.

"What we can learn from that is we're still a work in progress. There's a lot of things we need to get better at. However, when our backs are against the wall, we are going to stick together and face adversity and never give up."

Junior Rhyne Howard, last year's SEC Player of the Year, put up a double-double (24 points, 10 rebounds) against Arkansas. She then scored 25 of her game-high 33 points in the fourth quarter and overtime in the win over Mississippi State. In fact, the 6-2 preseason All-American scored 25 of Kentucky's final 31 points.

Howard can do more than just score, Elzy said.

"Obviously, she is playing extremely well right now, with a lot of confidence," Elzy said. "The thing about Rhyne, I've said it over and over and over again. She is the best player in the nation and she showed why. Her ability to score is uncanny. She has ice water in her veins.

"But what I don't think people appreciate her as much, her ability to pass the basketball, her IQ and she does things so effortless that people don't think she's playing hard all the time. But then you look at the stat sheet and she has 8 assist, 10 rebounds, 7 steals.

LSU wiped out a 13-point second-half deficit to knock off Ole Miss 77-69 in overtime Monday and start league play 2-0.

LSU (4-4) trailed 62-54 with three minutes left in the fourth quarter, but the Tigers didn't quit.

Ole Miss sent the game into overtime on Shakira Austin's jumper, but LSU scored eight of the first 10 points in the extra session and never looked back.

Senior guard Khayla Pointer keyed a 10-0 run that wiped out the eight-point deficit. She scored six of the 10 points in the run and finished with a season-high 18 points to go with 12 assists.

The game was pushed from Sunday to Monday to allow Ole Miss to fully emerge from covid-19 quarantines. The Rebels, who hadn't played since Dec. 19, dressed out eight out of their 12 players, and two fouled out.

Vanderbilt (4-1, o-o) had its schedule interrupted by covid-19 issues and have yet to begin SEC play.

The Commodores have either canceled or postponed seven games this season. The team has paused all basketball activities "due to a combination of positive tests, contact tracing and subsequent quarantining of individuals," according to a release by the school. The earliest the Commodores could return to action is Sunday at home against Alabama.

The Commodores have postponed three SEC games against Florida, Mississippi State and Missouri. Vanderbilt hasn't played since a 97-58 win over Gardner-Webb on Dec. 20.

Texas A&M pulled away from Florida late to claim a 92-67 win over Florida in the league opener on Sunday. But the Aggies (10-0, 1-0) weren't one-dimensional.

The Gators were outscored 48-32 in the paint by the Aggies as N'dea Jones and Cierra Johnson both posted double-doubles. But Texas A&M also made 8-of-9 from beyond the three-point line, too. Aaliyah Wilson, a 5-11 senior who transferred from Arkansas after her freshman year, hit three three-pointers and finished with 14 points.

Howard registered a pair of double-doubles in two Kentucky wins. The 6-2 junior also led the Wildcats in assists in both games. Her eight three-pointers on the week moved her into fourth all-time in program history.

The 6-1 Collins from Brookhaven, Miss., scored 14 points for Ole Miss vs. LSU, including 3 three-pointers.

From top to bottom

NOTE The NCAA instituted this season for women's college basketball, a rating system called the NET Rankings, which took the place of the Ratings Percentage Index. An acronym for NCAA Evaluation Tool, the NET rankings take into account game results, strength of schedule, game location, scoring margin, net offensive and defensive efficiency and the quality of wins and losses. This set of rankings is the first of the 2020-21 season.

A battle of top 10 teams, which will be the third of four consecutive ranked opponents for Kentucky, is an interesting one. The Wildcats knocked off Arkansas and Mississippi State and then play host to No. 5 South Carolina on Sunday. The Aggies are 10-0 after their 92-67 win over Florida on Sunday.

8 Players Ole Miss dressed out for its game against LSU on Jan. 4 because of covid-19 issues