Arkansas reported a near-record of 65 deaths from the coronavirus Wednesday as its count of cases rose by more than 3,700.

After setting records for the previous four days, the number of people hospitalized in the state with the virus fell by two, to 1,321.

Those patients included 217 who were on ventilators, down from a record 224 a day earlier.

Despite those drops, the number of virus patients in intensive care units set a record for the third day in a row as it rose to 427.

That was up from the 421 covid-19 patients the Health Department reported were in intensive care as of 2 p.m. Tuesday.

The department's online dashboard later that day listed the number as 426.

"We continue to see high numbers of new cases across the state," Gov. Asa Hutchinson said in a statement Wednesday.

"Be mindful of being a safe distance and protecting each other. It has been a tough day with the loss of another 65 of our friends and neighbors to COVID-19."

He added that vaccines "continue to be distributed across the state to those in Category 1-A," which includes health care workers and the residents and workers at long-term care facilities, "and we are also receiving additional doses each week."

The increase in the state's death toll was just short of the record 66 that were added to the state's count on Dec. 29.

The deaths added Wednesday brought the total to 3,901.

The total of 3,705 cases added to the state's tallies was down from the spike of 4,107 cases on Tuesday.

The state's average daily increase in cases over a rolling seven-day period rose by 74, to 2,880, reaching a new high for the second day in a row.

State Epidemiologist Jennifer Dillaha said the numbers reflect a "continued upward trend related to Christmas and then New Year's Eve on top of it."

She said she expected the acceleration in new cases to continue as people infected during holiday gatherings pass the virus to others.

"The spreading around the state in communities is so widespread, it's very easy for people to be exposed," Dillaha said.

The cases added to the state's tallies included 2,324 that were confirmed through polymerase chain reaction, or PCR, tests.

The other 1,381 were "probable" cases, which include those identified through less-sensitive antigen tests.

At a record level since Tuesday, the number of cases that were considered active rose by 684, to 25,092, as new cases outpaced recoveries.

Among prison and jail inmates, the Health Department's count of cases rose by eight.

Among nursing home and assisted living facility residents, the state's count of virus deaths grew by 15, to 1,591.

The number of virus patients who have ever been on ventilators grew by 15, to 1,271.

Meanwhile, the Health Department reported that 14.1% of the PCR tests performed on Arkansans were positive during a seven-day span ending Tuesday.

That was down slightly from the 14.4% that was initially reported for the week that ended Monday.

The percentage for that period later rose to 15.6% as more test results were reported.

Hutchinson has said he wants to keep that percentage -- a gauge of whether a state's testing is adequate -- below 10%.

As of Wednesday morning, Arkansas had received a total of 152,075 doses of covid-19 vaccines from Moderna and from Pfizer and BioNTech under the vaccination program coordinated by the Health Department.

Pharmacies and other providers reported administering 50,679 of those doses, up from 37,884 as of a day earlier.

In addition, Walgreens and CVS reported administering 1,533 doses of the Moderna vaccine in Arkansas under a federal program for residents and workers at long-term care facilities.

That was up from 1,324 doses the two national chains reported administering in the state as of a day earlier.

The Health Department said last week that the two companies had been allocated a total of 37,100 doses of the Moderna vaccine for Arkansas.

But department spokesman Gavin Lesnick said Wednesday that the two companies only ended up being allocated 24,700 doses.

"After consulting with the federal officials, we determined that we did not need to allocate as much vaccine [to the two companies] as we initially planned," Lesnick said in an email.

Dillaha said the allocation to the companies was "based on a formula" and that "there was some incorrect instruction related to how to apply the formula."

Lesnick said 10,600 of the doses that the state had initially designated for Walgreens and CVS were added to the state's allocation this week for other pharmacies and that the rest will be included in a future order.

So far, the state's vaccination efforts have focused on health care workers and residents and workers in nursing homes and other long-term care facilities under Phase 1-A of its vaccination plan.

According to the U.S. Centers for Disease Control and Prevention, Arkansas' allocation for next week will include enough doses to provide the initial shots of the two-dose regimen for 17,700 more people with the Moderna vaccine and 18,525 with the Pfizer vaccine.

Lesnick said the doses administered as of Wednesday morning likely include some booster shots for people who received their initial dose of the Pfizer vaccine last month.

The number of available hospital beds in the state jumped by 68, to 1,917 on Wednesday, according to Health Department data.

Available ICU beds dropped by five, to 42. Out of the 1,155 ICU beds, 3.5% were available Wednesday afternoon. 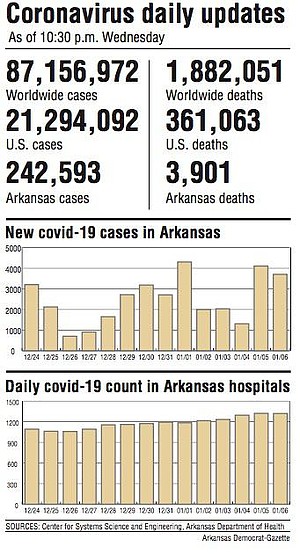