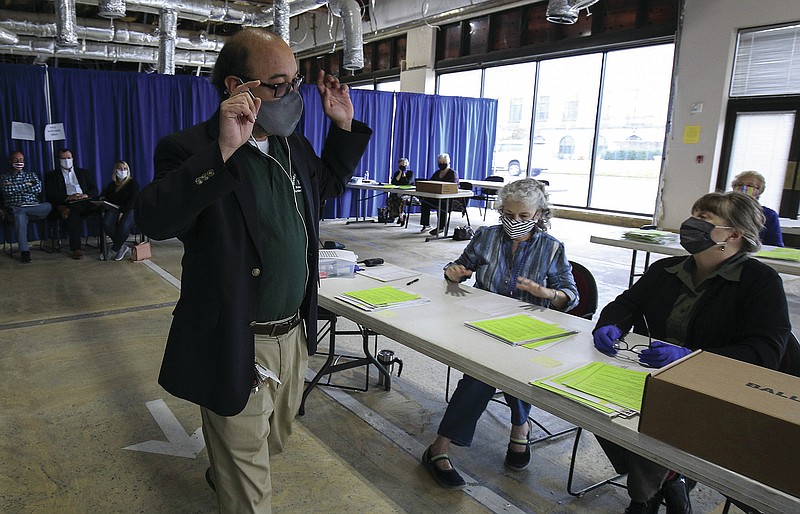 The Pulaski County Election Commission on Tuesday voted to decertify the county's top election staffer, with the aim of preventing him from participating in election-related work, in a 2-1 vote along partisan lines.

The decision to sideline Poe was the latest episode of infighting within the Pulaski County Election Commission, where questions of staff and process have pitted commissioners against others in the county.

In November 2019, Pulaski County Judge Barry Hyde, the county's chief executive, said he would assume authority over the commission's staff by taking away the power to hire and fire personnel from the commissioners. Hyde is a Democrat.

At the time, he referenced an "abusive" work environment created by an election commissioner, whom Hyde declined to identify.

During the November election, Shawn Camp, the county's assistant director of elections, filed a police report after he said Gomez pushed him Nov. 3 while she sought to gain access to a suite of offices used by the commission's staff.

The practical effects of the commission's vote to decertify Poe remain unclear. However, during Tuesday's meeting Camp suggested that Poe's removal deprives staffers working under him of their authority to work on election-related matters.

"The staff of the election department derives its authority and its power to act from the coordinator" -- i.e., Poe -- "and if the coordinator is not able to work on an election, none of the staff is either," Camp said via Zoom.

Gomez and Stahr quickly disputed the statement from Poe's deputy.

Camp added that "the county attorney will address that at a later point."

Stahr suggested the motion to decertify was based on "egregious errors made throughout this election and prior to this election."

Appearing via Zoom, Price argued that Poe's absence from the meeting because he was on paternity leave necessitated more discussion.

"I personally would not want to decertify him without at least having a follow-up discussion with him and having him present at the meeting," Price said.

Moments later, as the commissioners voted, Price said he would like to see a more detailed accounting of the issues regarding Poe.

"I'm not saying that mistakes were not made during this election, because they obviously were, but before we would move to decertify our director, I would like to see a catalog of all of these issues rather than just say, 'Based on what was discussed previously,'" Price said. "You know, I feel like it should be documented a little bit better than that."

Stahr said a catalog would be provided, but she added that "we can't move forward like this."

Poe could not be reached for comment by phone or email Wednesday. Cozetta Jones, a spokeswoman for Hyde, did not respond to requests for comment by email and phone.

When reached via email Wednesday evening, Gomez said she has not received any communication from Hyde or County Attorney Adam Fogleman with regard to the decision.

On the effects of decertifying Poe, Gomez wrote, "Practically, he won't be able to do anything with elections as he won't be a certified election official. Hyde is his boss, he's employed by him. I don't know what his work duties will be -- you will have to ask his boss about that."

She said "many reasons" led them to decertify the staffer, "several of which were listed by Commissioner Stahr in the meeting last night."

"Beyond everything specifically stated in the meeting, quite frankly, he breached the public trust in such an egregious way that there wasn't much of a choice left for us to make," Gomez wrote.

Several hundred disqualified ballots that were mixed in with other valid ballots during vote tabulation in Pulaski County for the November general election led to unsuccessful legal challenges from a three-term state representative.

State Rep. Jim Sorvillo, R-Little Rock, has tried to invalidate the slim victory of his Democratic opponent Ashley Hudson in the House District 32 contest based on the fact that election workers erroneously counted at least 27 absentee ballots in the district when the ballots should have been disqualified.

The most recent blow to Sorvillo's campaign came Monday, when the Arkansas Claims Commission ruled against him and recommended Hudson be seated in the Legislature.