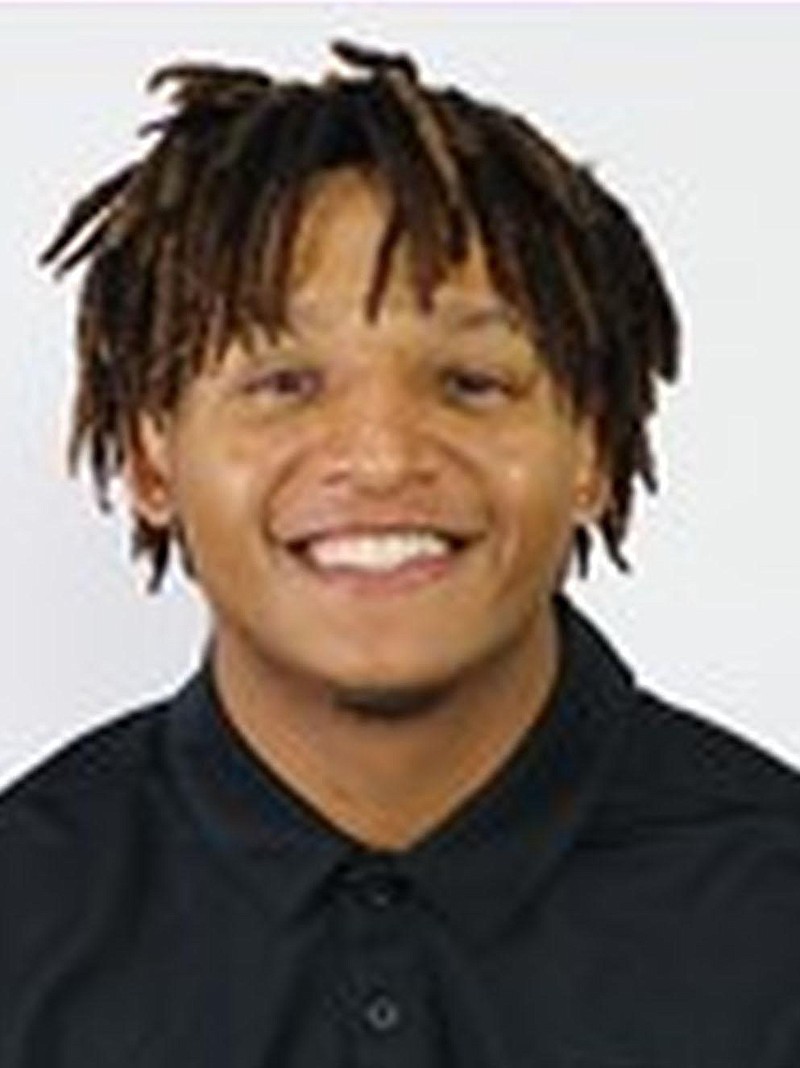 Without Jones -- whose status remains unclear after injuring his right leg -- UCA got by, led by 25 points from senior Rylan Bergersen. But it was a 21-point effort from Khaleem Bennett that also helped the Bears pull away from the Privateers and proved again to Coach Anthony Boone the rising star UCA has in the sophomore guard.

"Khaleem had a great game against a team that's pretty good defensively," Boone said. "We needed him to step up and do what he did."

Bennett is back with the Bears (3-7, 2-0 Southland Conference) in 2020-21, a long way from his last full season in 2018-19. The guard from Hamilton, Ontario, averaged 6.2 points and 3.1 rebounds as a freshman but suffered a broken foot that cut his debut season short and forced him to redshirt in 2019-20 following offseason surgery.

A year and a half removed from the injury, Bennett is providing UCA a spark it will need for any period of time Jones, the team's second-leading scorer, misses and beyond.

After matching his career-high in scoring Wednesday, Bennett is averaging 8.9 points on 51.9% shooting. In his third year with the program, he's grown into his game as a ball handler this season, and has expanded his offensive game, scoring not only at the basket but as a mid-range shooter. Bennett's three-point shooting remains a weakness -- he's missed all four of those attempts this season -- but as his versatility has grown, so has his scoring output.

UCA doesn't yet know how long it will be without Jones and his 10.5 points per game, but with Bennett's emergence, the Bears have a rising second scoring option behind Bergersen for the time being.

Kennerson out for season

UAPB guard Joyce Kennerson will miss the remainder of the 2020-21 campaign after tearing her right ACL in the Golden Lions' (2-5, 1-0 Southwestern Athletic Conference) 85-70 win over Mississippi Valley State on Saturday. The redshirt senior will have surgery on her knee in the next "week or two," according to Coach Dawn Brown.

Kennerson, 5-4, had scored 21 points and dished 8 assists in 22 minutes before exiting with the injury in the third quarter against the Devilettes.

"It's one of those things that no coach ever wants to happen to their program," Brown said. "You just have to deal with it as best as you possibly can."

Kennerson, who transferred from Texas Southern, was only five games into her career at UAPB. Her season comes to an end after averaging a team-high 14.0 points to go with 4.2 assists and 3.6 rebounds per game.

At 5-1, ASU is off to its best start to a season since 2003-04 with the help of one of the Sun Belt Conference best offenses.

ASU's 85.0 points per game this season ranks narrowly behind only Troy (85.4 ppg) for most in the Sun Belt. Bolstered by an 85-39 win over Central Baptist College on Monday, the Red Wolves enter this weekend's conference-opening set at home against Texas State with an average margin of victory of 30 points.

Over its first six games, ASU has leaned on balanced scoring and accurate shooting, with Jada Stinton (12.7 ppg), Peyton Martin (11.8) and Jireh Washington (10.2) each averaging in double-figures and the Red Wolves shooting 46.4% from the field, best in the conference. Matt Daniel's team has also received contributions from Trinitee Jackson, pouring in 8.3 ppg on 45.5% shooting, and Karolina Szydlowska, who leads all ASU starters with 5.7 rebounds per game.

Shaun Doss Jr. lost his 2019-20 season due to injury, but the University of Arkansas at Pine Bluff redshirt junior has regained his form this year and is now powering the Golden Lions (2-8, 1-0 Southwestern Athletic Conference) into their league schedule.

The guard from Marion scored 23 points and pulled down 13 rebounds in UAPB's 92-52 win over Mississippi Valley State over the weekend, and on Tuesday was named the SWAC Player of the Week performance. The effort marked Doss' second-consecutive double-double and the fifth-time he's scored 20 or more points this season.

Averaging 17.4 points per game, Doss has reemerged as the offensive force UAPB hoped he'd be before last season's injury, and with him now at full strength, the Golden Lions' have a No. 1 option to help take them through conference play.

After falling to McNeese State on Jan. 2, UCA remained in Louisiana earlier this week and prepared for another road game at New Orleans which was scheduled for Wednesday. Hours before tip-off, the Privateers postponed the game due to covid-19, and the Sugar Bears (2-7, 0-1 Southland Conference) returned to Conway without a road victory ahead of a daunting pair of home games.

"We needed a win," UCA Coach Sandra Rushing said. "We let one get away [at McNeese State], and we lost our chance in New Orleans. Now we have to take care of business at home."

Up next on Saturday, after the missed opportunities in Louisiana, is Sam Houston State -- picked in the preseason to finish second in the conference -- which comes to Conway hungry for a first Southland win. The Bearkats will be followed on Jan. 13 by Stephen F. Austin, the league favorites which stand at 10-2 on the season.

"We have to be able to handle whatever is thrown at us and control the things we can control," Rushing said. 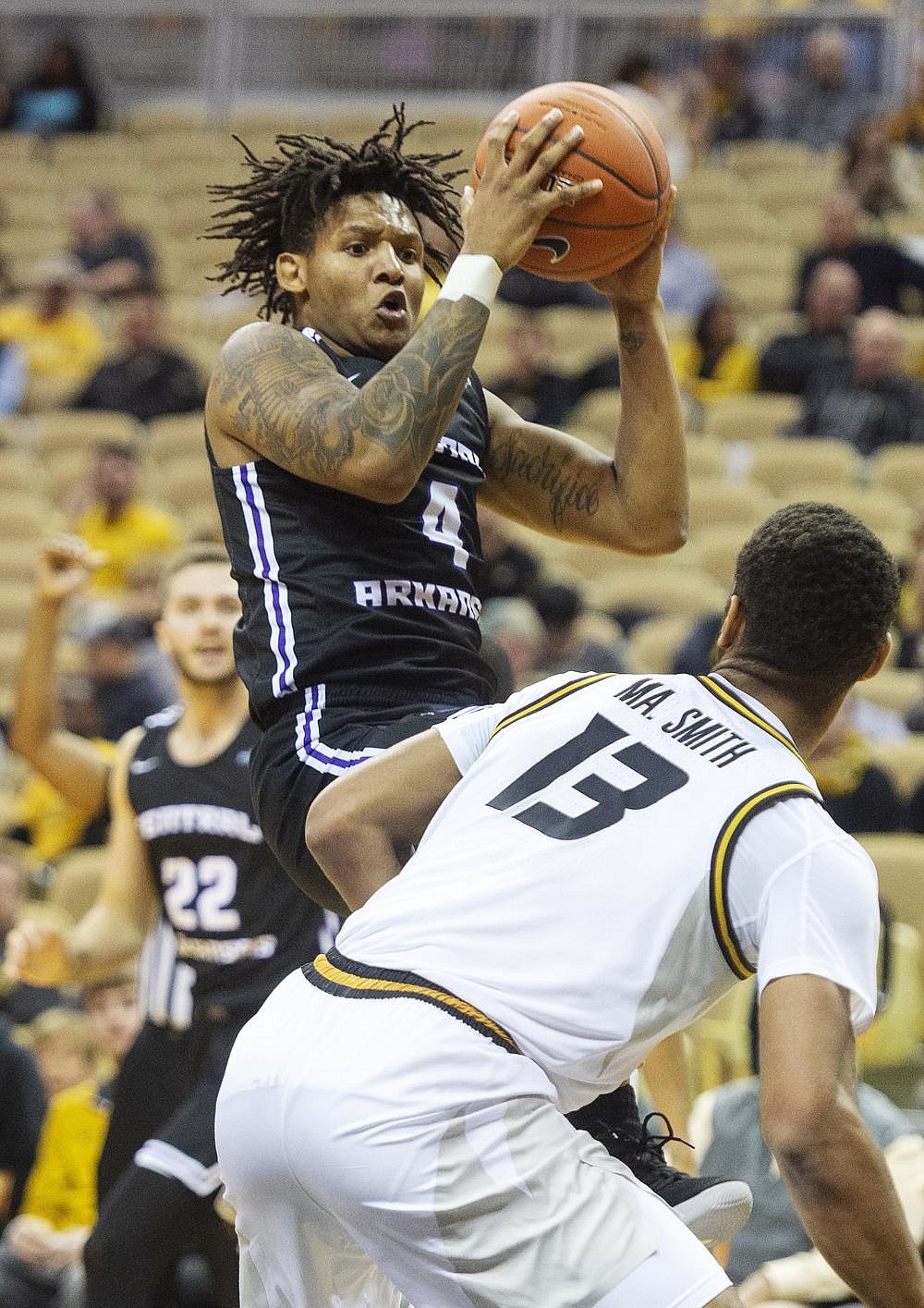 Khaleem Bennett (shown, 4), back with the University of Central Arkansas after having to redshirt in 2019-20 following offseason surgery for a broken foot, had 21 points to help the Bears defeat New Orleans. (AP/L.G. Patterson) 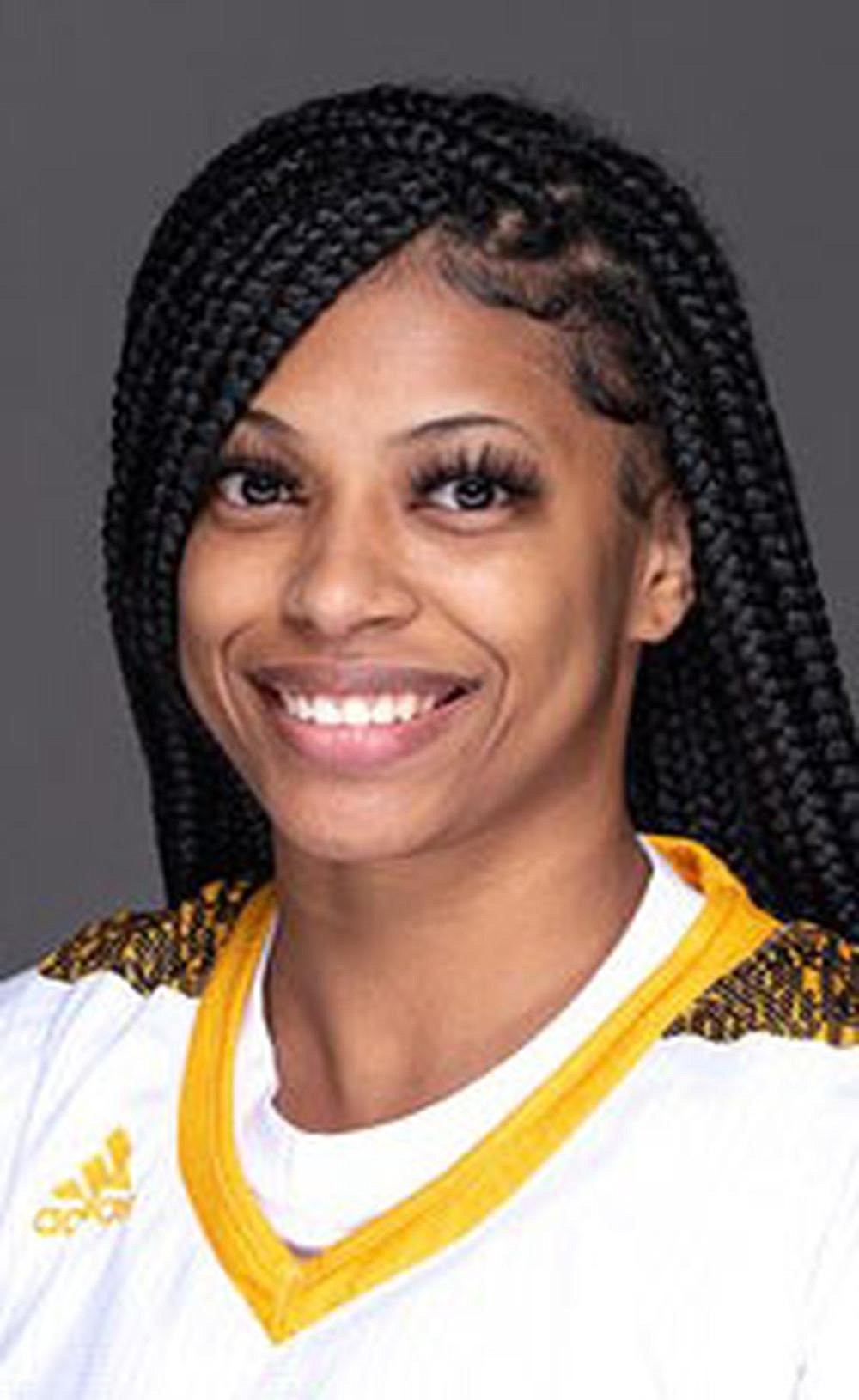